Why is Aragog suddenly smaller in Half-Blood Prince?

In the film adaptations of Harry Potter and the Chamber of Secrets (HP2) and Harry Potter and the Half-Blood Prince (HP6), there seems to be a drastic size difference in the portrayal of Aragog, Hagrid's pet Acromantula, so much so that one could easily mistake the one in HP6 for one of Aragog's much smaller sons and daughters which we saw swarming Harry, Ron and Fang in HP2. 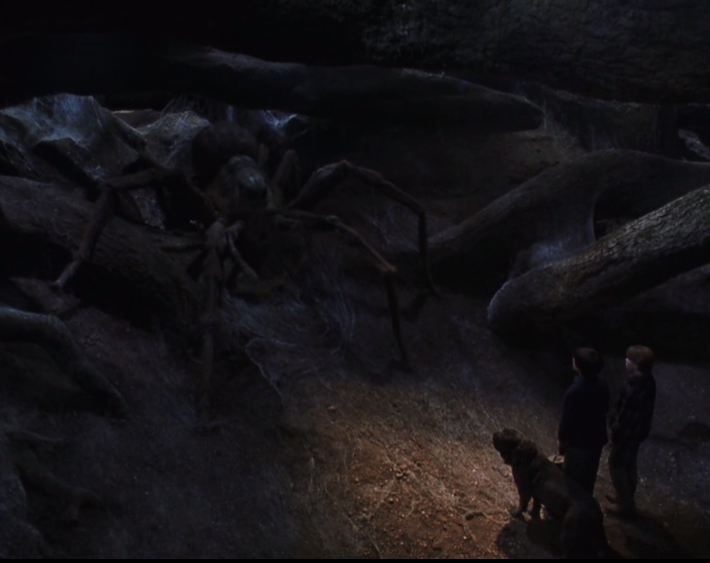 Aragog, Harry Potter and the Chamber of Secrets (2002), Warner Bros. 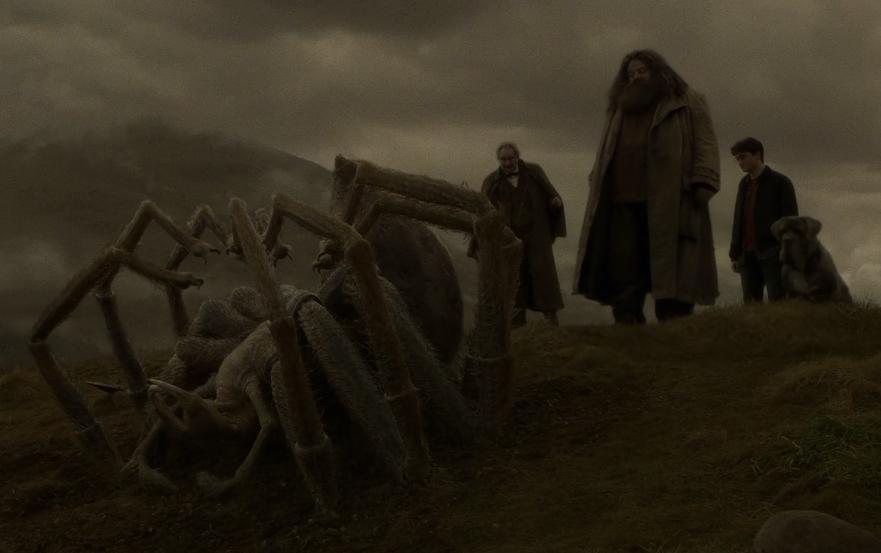 Looking at Fang (the dog) for reference, we can clearly see the dramatic size difference. Not only does Aragog look relatively smaller when using Fang as reference, but Fang is further away, behind a hill (so he'd look even larger when up close to the beast).

Why is Aragog suddenly smaller?

It is hard to determine if they are actually different sizes... To shed some light on the behind-the-scenes creation there is a post on Acromantulas on Pottermore, that takes some excerpts from Harry Potter: The Creature Vault by Jody Revenson.

When the designers read the script for Harry Potter and the Chamber of Secrets and discovered that a spider with an eighteen-foot leg span would be required, their obvious initial thought was that the creature would be computer-generated. Upon further consideration, however, it was decided that Aragog’s myriad offspring would be digital, but not Aragog. The creature shop realised that constructing the Acromantula would be more economical than CGI, and it would also allow them to make Aragog walk and talk on a life-size scale.

Aragog was completely redesigned for Harry Potter and the Half- Blood Prince to show his age. The creature was cast in a urethane that allowed light through it in order to emulate the translucent glow of an actual dead spider. The same 'hair' materials were used for both Aragog versions in Chamber of Secrets and Half-Blood Prince, including broom hairs for the finer ones and feathers with a coating of fluff and Lurex for the bigger, hairier ones. The hairs were inserted one at a time.

The script for Half-Blood Prince called for Aragog to be slid into a grave on a hill, so the designers knew that the Acromantula needed to be much heavier than the original in order to give the correct heft of a huge, upside-down dead spider. The creature was such a beloved character that the design crew wore black armbands while the spider’s final scene was filmed.

So for an out-of-universe reason, the props needed to be used in different ways and were designed to meet those expectations.

Hagrid may have shrunk Aragog's body for transport

Hagrid brought Aragog's body out of the Forbidden Forest:

'Never bin an area o' the Forest I couldn' go before!' said Hagrid, shaking his head. 'It wasn' easy, gettin' Aragog's body out o' there, I can tell yeh -- they usually eat their dead, see...but I wanted ter give 'im a nice burial...a proper send-off...'

This1 was a dangerous2 and difficult3 task, so Hagrid may have been tempted to cheat. After all, Hagrid was not even averse to using magic for convenience:

'Seems a shame ter row, though,' said Hagrid, giving Harry another of his sideways looks. 'If I was ter -- er -- speed things up a bit, would yeh mind not mentionin' it at Hogwarts?'

'Of course not,' said Harry, eager to see more magic. Hagrid pulled out the pink umbrella again, tapped it twice on the side of the boat and they sped off towards land.

Shrinking potions are an early part of the third-year curriculum:

[Harry's] teachers at Hogwarts had given him a lot of holiday work. One of the essays, a particularly nasty one about Shrinking Potions...

They were making a new potion today, a Shrinking Solution.

-- Prisoner of Azkaban (Chapter 7, "The Boggart in the Wardrobe")

Hagrid likely would have learned how to make shrinking potions by the time he was expelled:

[Hagrid] had been expelled from Hogwarts in his third year, for a crime he had not committed.

-- Prisoner of Azkaban (Chapter 5, "The Dementor")

Potions weren't even Hagrid's only option. Reducio is a fast-acting shrinking spell, and it is specifically shown to work on spiders:

'Reducio,' Moody muttered, and the spider shrank back to its proper size.

2 While being chased by giant hungry spiders!

3 Through a dense forest!

17
Did all Headmasters get a portrait in Hogwarts?
1
Half-Blood Prince's Journal
3
Why did Hagrid suggest to follow the spiders?
6
What monster did Headmaster Armando Dippet suspect made the attacks?
19
Why didn't Voldemort hide a Horcrux in the Chamber of Secrets?
26
When are “vampires” first mentioned in Harry Potter?
22
Why is Hagrid's face obscured in the memory recollection in Tom Riddle's Diary?
11
Did Tom Riddle really try to kill Aragog?