What was the Batman TV series (1960's) episode where he explains pyramid schemes?

When I was a child, I watched the 1960's Batman TV series every chance I got. One of the episodes came to mind this morning when I was trying to explain why the Secret Sisters gift exchange was a scam. Someone is trying to scam the town by proposing a pyramid scam (invest a little money now, multiple people pay you down the line as they invest) and he mathematically proved that the only people it would profit were the people who started it.

The only concrete image I have in my head is Batman (Adam West) standing in front of a room of people and using a pointer on a piece of poster board on an easel with an image of the pyramid and showing the math that every new person would need to bring in a ludicrously large number of other people in for the scheme to work.

Which episode was that?

There was an episode of Dragnet in which Sgt. Joe Friday gives a presentation in court using pointer and easel to make the case that the defendant knew she was scamming people out of their money using a pyramid scheme. 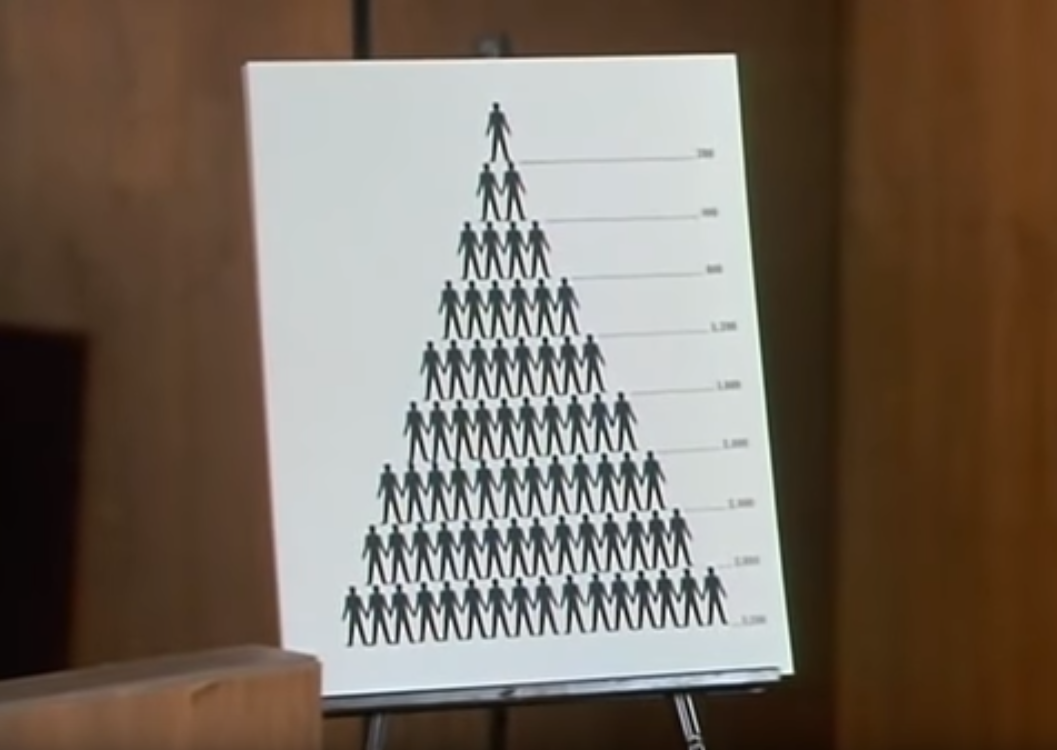 The clincher to the argument was the observation that in order to deliver on her promises of wealth, a follower of this revival leader's group would need to induct the entire population of the United States into the scheme.

This was episode 12 of season 10, titled "The Pyramid Swindle." It would be easy to misremember one famous deadpan lawman as another!

I think the episode you're referring to is Batman's Waterloo

Here is a description of the plot as given by IMDB

Though Batman escapes his watery trap, Robin is left in the hands of King Tut. The deluded villain still believes that Lisa Carson is really Queen Cleopatra, and calls Lisa's father to demand a ransom of $8,300,487.12, the mortgage on the Pyramids. Using the Jolly Jackson radio show to communicate, Tut negotiates the terms of payment with Batman. However, the villain most likely intends to keep both the money and Lisa, and has further plans to fry the Caped Crusaders in his royal boiling oil. - Written by Twenty Penguins

I found another episode that kind of fits your description, but it has no mentions of Pyramids.

It's the The Puzzles are Coming episode.

The Puzzler, a villain with a fondness for both Shakespeare and aviation, indicates he is after the fortunes of Artemus Knab. He convinces the billionaire to invest in his puzzle balloon business, but when the Dynamic Duo find that Knab seems too intelligent to fall for a phony scheme, they look deeper for the criminal's true intentions. Their search leads them to Knab's airplane monopoly, but unknown to them, the Puzzler has plans to halt their investigation - permanently. - Written by Twenty Penguins

14
What issue / series is this Batman comic panel from?
3
Batman (1966) episode where they're stuck in a room?
2
In which animated Batman series does Harley Quinn first meet the Joker?
68
What was the origin of the meme where Batman slaps Robin?
2
What was the episode of a 90s cartoon where an enemy of Batman was fixated on time?
1
Looking for an episode In the Batman Animated Series where Batman copies himself
39
In the Batman TV series, was there an "up" mode for the Bat Pole?
9
What is the origin of this Batman comic book panel?
6
What is the source of this Batman artwork that my family member copied?