Book about a pair of wizards in another world

I read this book back in the early 90s. It was about a pair of wizards - the older mentor and younger student. In their world wizards are generally looked down upon and even have fewer rights than other citizens. They live in a kingdom that is more enlightened about such things and work for the local king. They perform mostly low magic - one of the spells I recall them using was "Look over there!" or some thing to that affect that caused people looking for them to look in another direction. I remember that they surmised that they could make stronger magic if they had a way to purify their ingredients better.

The younger wizard had illegitimate children with one of the kings daughters. I recall a scene where they converse with a "blood mages" that uses aggressive magic.

At the end of the book they have been summoned to earth, where there is no magic.

Does anyone know what story this is?

@Spencer is certainty correct, I recognized this immediately from your description.

It's The Rainbow Abyss, by Barbara Hambly. 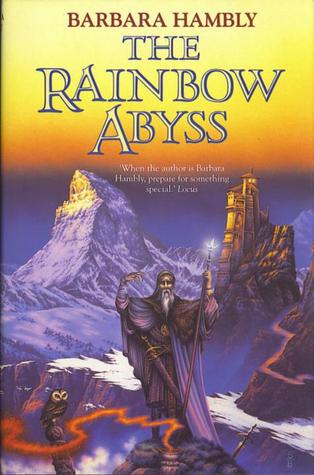 Not the answer you're looking for? Browse other questions tagged story-identification wizards or ask your own question.

4
Book trilogy about magic monks/wizards and an evil empire/kingdom
5
Book About Kids Who Travel to a Fantasy World That is Painted Around Them
7
Alternative History - Alchemy, crystal faxes, and Jesus Shoes
2
Trying to recall novel that begins with spying on a naked witch performing a ritual
9
He drives a tank and he is fertile, this small town could use his help
8
Book about a kingdom invaded by another world
6
Novel about two princesses in a fantasy world, one falls sick and the other travels to find a cure