Was there a Star Trek novel in which Klingons had a short life span?

According to Memory Alpha

Klingons were capable of living well over a century in age. Individuals such as Kang, Koloth, Kor, and Arne Darvin lived well over one hundred years. (DS9: "Blood Oath", "Trials and Tribble-ations", "Once More Unto the Breach.

However, I have a clear memory of reading a Star Trek novel (long ago) in which Klingons were described as having a short life span. In fact, the life span given -- 8 years -- was so ridiculous that it stuck in my memory.

One caveat: it is possible that 8 years was the time to puberty, but I definitely remember 8 years. I remember nothing else about the novel.

Does this ring a bell with any of you Star Trek gurus, or should I see a neurologist?

You're probably thinking of The Final Reflection by John M. Ford. 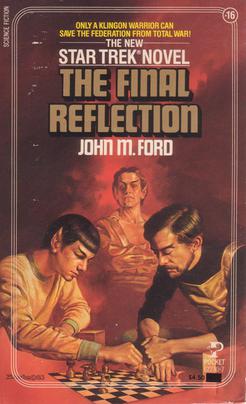 I bought it in the mid-1980s, when it was a newly released paperback, and I loved it. But I believe a lot of the details about Klingon culture and biology which Ford invented to flesh out his characters were then firmly ignored by lots of other writers who contributed new material to Star Trek in one way or another before the recent reboot -- people who wrote novels, TV scripts, movie screenplays, etc. -- and that's probably just as well.

I remember it was made clear within the text that Klingons matured significantly faster, and died of old age (if they lived long enough) much younger, than did the humans of that era. (Note: This was set decades before James T. Kirk became captain of Enterprise. A very young Spock appears onstage in one scene -- the one depicted on the cover -- and little Leonard McCoy is stated (by his grandfather) to still be in diapers.) I don't remember if we were told exactly at what age the average Klingon reached puberty, and/or became regarded as a "legal adult" by the laws of their Empire. It's been a long time since I last reread my copy of the novel.

With that said, I'll acknowledge that "reaching puberty around age eight" is much closer to what I vaguely remember than "might drop dead at age eight" would be. I believe there was one point where a major human character -- Dr. Tagore, appointed to be a Federation Ambassador to the Klingon Empire (the first such Ambassador, I think) -- asks Captain Krenn (the Klingon who is the main viewpoint character) about his age, is told that Krenn is about twenty-five (or a little under) and says something to the effect that one way to look at it was that both of them might last another twenty or thirty years, if nothing violent happened to cut their lifespans short. (Dr. Tagore was, I think, somewhere around age 70 at that point.) Sorry I can't look it up for you to get the exact wording, but my copy must be inside a box in a storage unit at the moment.

Not the answer you're looking for? Browse other questions tagged story-identification star-trek klingon or ask your own question.

12
Why was there never a Star Trek series based primarily on Klingons
10
Which sci-fi short story had musically talented teens who must choose between long life or normal life span and musical immortality?
5
Any short-haired, skin-head or bald Klingons out there?
10
How is longer life span explained in Star Trek?
24
Which Star Trek episode featured humanoids who have a one-month life span?
10
Which Star Trek novel featured disgusting bag-like aliens?
4
In which episodes of Star Trek TNG were 'new life' encountered?
19
Why do the Klingons in Star Trek: Discovery look so different?
2
Is there evidence to suggest that the Klingons employ the augment virus as a subterfuge technique in Star Trek Discovery?
7
Which Star Trek movie has a scene where there is a “bomb” that creates life?