How tall were the Argonath?

The Argonath were two huge works of stone, carved in the likenesses of Isildur and Anarion, that stood at either side of the River Anduin. They were situated at the entrance to a wide lake called Nen Hithoel, at the opposite end of which were the Falls of Rauros. They marked what was at one point the northern border of Gondor. The statues are described in various places as "vast", but do we have any information as to exactly how tall they were? Is there anything to suggest that they were anywhere near as tall as the appear in the Fellowship of the Ring film? 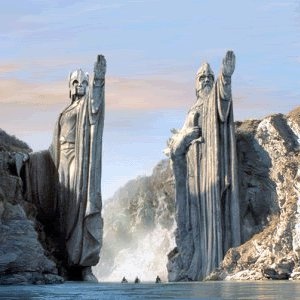 There's not much description of the Argonath in Tolkien's writings; basically all we have is the descriptive passage from Fellowship, which suggests that they're somewhere between "massive" and "incredibly massive":

Frodo peering forward saw in the distance two great rocks approaching: like great pinnacles or pillars of stone they seemed. Tall and sheer and ominous they stood upon either side of the stream.

As Frodo was borne towards them the great pillars rose like towers to meet him. Giants they seemed to him, vast grey figures silent but threatening. Then he saw that they were indeed shaped and fashioned: the craft and power of old had wrought upon them, and still they preserved through the suns and rains of forgotten years the mighty likenesses in which they had been hewn. Upon great pedestals founded in the deep waters stood two great kings of stone: still with blurred eyes and crannied brows they frowned upon the North. The left hand of each was raised palm outwards in gesture of warning; in each right hand there was an axe; upon each head there was a crumbling helm and crown. Great power and majesty they still wore, the silent wardens of a long-vanished kingdom. Awe and fear fell upon Frodo, and he cowered down, shutting his eyes and not daring to look up as the boat drew near. Even Boromir bowed his head as the boats whirled by, frail and fleeting as little leaves, under the enduring shadow of the sentinels of Númenor.

Fellowship of the Ring Book II Chapter 9: "The Great River"

There is a descriptive passage in one of Tolkien's early drafts, but it largely resembles the final one; for comparison's sake:

The great pillars seemed to rise up like giants before him as the river whirled him like a leaf towards them. Then he saw that [they] were carved, or had been carved many ages ago, and still preserved through the suns and rains of many forgotten years the likenesses that had been hewn upon them. Upon great pedestals founded in the deep water stood two great kings of stone gazing through blurred eyes northwards. The left hand of each was raised beside his head palm outwards in gesture of [?warning] and refusal: in each right hand here was a sword. On each head there was a crumbling crown and helm. There was still a power in these silent wardens of a long-vanished kingdom.

History of Middle-earth VII The Treason of Isengard Chapter XVII: "The Great River"

They were certainly not little things, the Argonath, and the depiction of them in the films seems fair; however, a more precise comparison is not given. Having skimmed through Tolkien's known drawings, I can find no indication that he ever drew them, either.

Given the height of the pinky toe where it starts on the foot, at appx 10ft, with a sitting legolas to indicate scale. Assuming my personal body proportions are fairly normal, that point is 1/137.5 of my height, giving the statues an appx minimum height of 1400 ft, with a likelihood that they are about 100ft taller, given that these statues are not quite proportional to your regular person and are meant to be imposing.

I will not assume the length of the arms is limited by stone strength, given this is a world of magical items and creatures.

Not the answer you're looking for? Browse other questions tagged the-lord-of-the-rings tolkiens-legendarium the-fellowship-of-the-ring or ask your own question.

20
How tall was Barad-dûr?
14
How old were Aragorn and Arwen when they were married?
10
Early history of men
12
Númenórean interaction with other Men
21
What did ships in Middle-earth look like?
5
How many were at that long expected party?
4
How tall were the Valar in their physical raiment?
6
How tall were the Two Trees?
45
How tall was the Balrog of Moria?
35
What were the two standing stones that Frodo sees?