What is the meaning of Bran Stark's dreams with a three-eyed raven?

After is come, Bran Stark repeatedly made dreams that include a three-eyed raven : 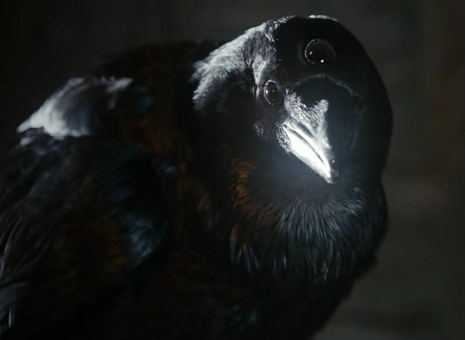 What is the meaning of those dreams? Does the three-eyed raven has an universal symbolism that I don't know about?

The meaning (and identity) behind the three-eyed crow is revealed in A Dance With Dragons.

Until then, earlier in the series the three-eyed crow represents a mysterious mentor, who can act as some sort of guide for Bran (teaching him how to "fly"), as revealed both by Bran's dreams and Jojen Reed's greendreams.

In A Dance with Dragons Bran and the Reeds reach the three-eyed crow, who is revealed to be a powerful skinchanger and greenseer, who resides underground with a population of remaining Children of the Forest. He was, at one time, a member of the Night's Watch, but now sits on his underground seat encased by weirwood roots, using his skinchanging and greenseer powers to unknown purposes. He begins to teach Bran how to use those same powers, opening Bran's "third eye", which is a reference to Bran learning to unlock his greenseer powers.

Out of universe, the "third eye" or "inner eye" is a reference to the brow chakra, and being able to open the third eye is said to allow great spiritual insight, or even the ability to enter into another's body.

14
Have other men been the Three-Eyed Raven in the past?

14
Are those White Walkers that attack Bran Stark and Co. on their quest to find the Three-eyed raven?
6
Did the three eyed raven know this? (S6E05)
22
To what extent does Jon Snow have abilities as a Warg
12
Was Bran's accident a precondition for his recruitment?
8
Can wights swim in Game of Thrones / Song of Ice and Fire?
14
Have other men been the Three-Eyed Raven in the past?
8
What is the Three-eyed Crow true identity on the show?
62
Why isn't everyone flabbergasted about Bran's “gift”?
11
Did Bran know what was going to happen at the end of S08E03?
23
Are there any of the Children of the Forest left, or are they extinct?