TK-421 was the call number of the Stormtrooper that was sent on the Millenium Falcon to investigate it once it was captured in the Death Star 1's tractor beam following their jump to the Alderaan system. TK-421 and another Trooper entered the Falcon, were ambushed, and Han and Luke emerged wearing their armor.

So, clearly their bodies would not be dragged off the ship because that would draw attention. So we can assume that their bodies (alive or dead) left the Death Star with the Rebels and brought (assuming they weren't jettisoned into deep space) to Yavin 4...

Is there any evidence (Legends or Canon) that details his fate or that deals with the whereabouts of these Stormtroopers?

EDIT: Also includes the scanning crew... are they amongst the dead stormtroopers?

He died (see below).

He had to give them a little credit—both stormtroopers were quick reaching for their guns, but very few in the galaxy were faster on the draw than Han. The two stormtroopers fell just as hard as the scanner crew did. “Nice shooting,” Luke said, clapping Han on the shoulder.

A New Hope: the Princess, the Scoundrel, and the Farm Boy

This concurs with the older junior novelisation. Interestingly, the scanner crew weren't killed in this version, just knocked out.

The two stormtroopers glanced at each other, then marched up the landing ramp. They had no idea that the scanning crew had already been knocked out, and that it had been the Falcon’s captain who’d summoned them into the ship.

Han fired his blaster pistol twice. The stormtroopers never knew what hit them.

(Note that Han's blaster doesn't have a stun setting).

That being said, in the Star Wars: Fact File, it's noted that the guards were merely stunned.

The prospect of leaving his escape from the battle station in the hands of an old man did nothing to improve Han Solo's temper. However, the calm air of confidence Kenobi exuded soothed Solo's doubts. Stunning the scanning crew and the two stormtroopers was not difficult. The overconfident Imperials had left no other guards.

But which conflicts with the Star Wars Radio Play

COMM VOICE: What's your situation there?

2ND TROOPER: Sir, we're in the command office overlooking the captured starship. The scanning crewmen on the ship were knocked unconscious, and the guards have been shot.

Which actually lines up with the early draft script.

GUARD: You have business here?

The guard is Han Solo. He struggles to hide a large blood stain under his right arm.

OFFICER: I thought I heard something down here.

As to why the trooper armour doesn't have any blood/scorch marks, this was addressed by authorised Star Wars artist Chris Trevas in his iconic "The Folly of TK-421" picture, commissioned by Lucasfilm in 2015 as part of their annual Star Wars Celebration 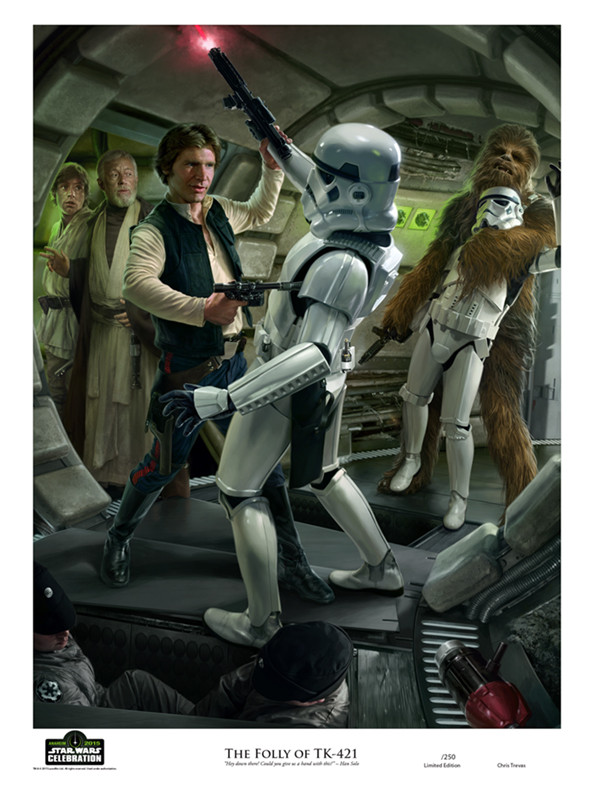 With regard to the ultimate disposition of his body/their bodies, only the official novelisation seems to address this. Note that this source indicates that he was stunned rather than killed, but regardless he was found aboard the Millennium Falcon before they escaped.

Someone finally discovered the two unconscious guards tied in the service lockers on board the captured freighter. Both men remained comatose despite all efforts to revive them.

Under the direction of several bickering officers, troopers carried their two armorless comrades down the ramp and toward the nearest hospital bay.

Thus even if he didn't die from his wounds, it strongly suggests that he died on the Death Star when it exploded.

41
Where'd those guys on the Millennium Falcon go?

26
Why was the Death Star's tractor beam not used as a weapon during the battles?
8
Why didn't the Empire attack Yavin 4 after the Death Star was destroyed?
15
When did Darth Vader learn that Luke took part in Leia's rescue from the Death Star?
17
Are old order stormtrooper helmets more sight restrictive than clone helmets?
16
Were any Imperial troops or high-ranking authorities killed when the Death Star destroyed Alderaan?
39
Why did Luke leave Owen and Beru's remains?
50
Why didn't Luke use his lightsaber during his mission on the first Death Star?
9
If Darth Vader sensed Kenobi aboard the Millennium Falcon, why didn't he go aboard?
7
Did Obi-Wan Kenobi know how to destroy the Death Star without the help of the stolen plans?