How old was Laura/X-23 when she joined the X-Men and around M-Day?

I remember there was an issue, shortly after M-Day if I'm not mistaken, where the kids in New X-Men are trying to find out who is the youngest student. I'm pretty sure they mention X-23... I've been trying to find New X-Men summaries online, but haven't found a reference to that scene.

Besides that, a friend of mine swears she was 14 years old when she joined the X-Men, but I read those issues (some years ago) and I can't remember seeing any reference to her age.

PS: I'm looking for age references that can give Laura's age at the time of her joining the X-Men and around M-Day, so references to the NYX and X-23 mini-series will only work if there is an eventual time reference concerning how long after that age reference she joined.

It's going to be difficult, if not impossible, to get a completely authoritative answer. One of the problems is that comics are often cagey about ages because they may need to contradict it later (and of course, they also do *that** all the time... Kitty Pryde has been all over the place, frequently being reduced to a teenager despite other books saying she was older... and that's merely from inconsistencies behind the scenes, rather than de-aging, age-accelerated clones, time travel, and all the various other tricks that can alter a character's age in story).

Moreover, "Marvel time" is full of things where characters only age a year despite having several adventures in which full cycles of the seasons pass so the stories can match the real world, and even mark holidays... not to mention cases where the comics jump ahead in time but nobody really carefully keeps track of the characters age. So you can't even, really, say "Okay, they said she was 15 in this issue, but then they went through four Christmas adventures since then and so she must be 19 now." You sort of have to either be comfortable with ambiguity or hunt down specific canon references at the exact time you're interested.

In the issue you mention, where the kids are asking about the youngest mutant (New X-Men, Vol 2, #42), X-23's age is never given. However, she is among one of the people asked (they never actually say any of the ages, except for the Stepford Cuckoos... 2, artificially aged to 15... since the Cuckoos weren't considered the youngest, we can assume they took the latter answer). Wolfclub, Pixie, and Indra are assumed by everybody to be the youngest (Indra turns out to be, followed by Wolfclub), and nobody even mentions X-23 as a contender once she was asked. Pixie was, I believe, fifteen at the time, so that provides evidence, although not again conclusive evidence, of a lower bound. The final decision was made by "comparing birthdays" which means that the only people who could be considered the youngest would be among people who said they were the same age but from different months.

However, in X-Force #20, (published in 2009, only two real-life years since the New X-Men issue, which is typically a negligible amount of time in-universe), Domino does say she is 16... 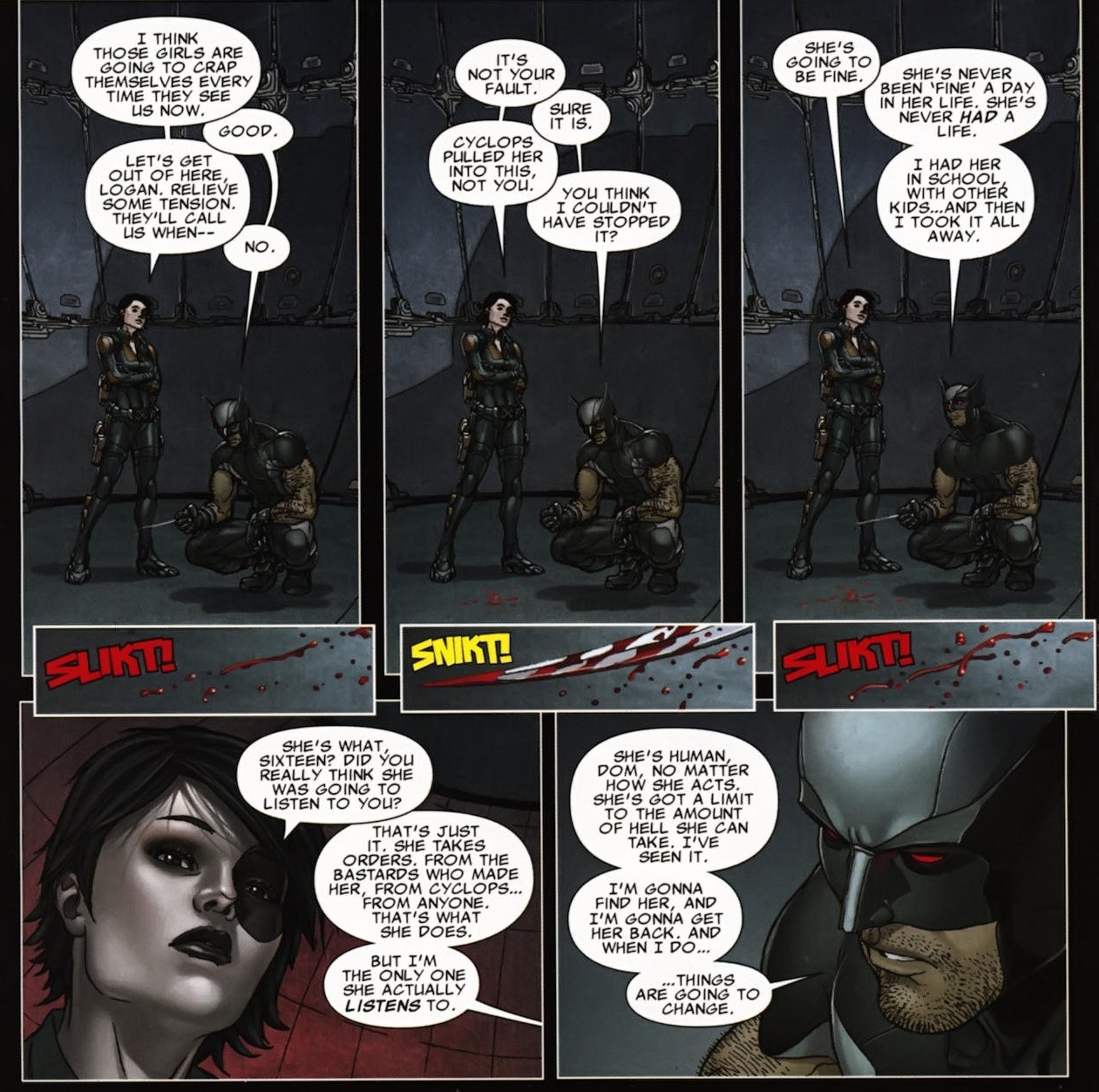 Although again, somewhat non-conclusively with the "She's what, sixteen?" rather than "She's sixteen." You could easily say Domino was mistaken but Wolverine didn't bother to correct her. This is possibly because the writers (Craig Kyle and Chris Yost), who were also the creators of the character and wrote her origin story and many definitive moments, either weren't sure themselves or wanted to leave room to change it if they need to.

We also know that her first official published encounter with Wolverine, in an issue written by Chris Claremont (who probably intended her to be older, to cut down on some of the skeeviness of her earlier NYX appearances) that she was a waitress in a club in the mutant town district (Claremont also intended it to be the actual first meeting between the two, but it was later retconned that she met him earlier, alone, but they set up this surprise meeting to introduce her to the rest of the X-Men). That also suggests that she couldn't have been much younger than sixteen, or at least didn't appear to be, or they couldn't have hired her (one would assume in the Marvel universe a club like that would be liable to be raided by the mutant-hating cops on any excuse and so be extra careful about trying to hire minors... Logan could have provided her with false documents, but she had to at least seem plausibly of legal age to work in NY State, which is at least 18 to work serving alcohol, if supervised by someone older... if the place didn't serve alcohol, she could have been as young as 14, I believe).

So, probably she was intended to be 15-16 around the time of her joining the X-Men and M-Day.

37
Why Doesn't the Adamantium Bone Covering Kill Wolverine?
4
Why has Namor joined the X-men?
13
How old is Kitty Pryde in Earth 616?
5
What collected editions does Dust (Sooraya Qadir) make a significant appearence in, prior to/including Utopia?
1
How old is Alex Summers (Havok) in X-Men: First Class?
1
Can Someone Explain Briar Raleigh and Magneto's Interest in Her?
4
Kraven the Hunter and his potion
3
Is Wanda Maximoff related to Quicksilver in Dark Phoenix?
12
What X-Men comic features Storm being attacked by a group of drug addicts in a housing project, and is saved by Luke Cage and Misty Knight?