Book with Norse gods and runes

I remember reading this Trilogy about 8 years ago (2008) that was set in a Norse world with Nordic Gods, frost giants and all that. It was old-timey, like in the Viking period. I don't think the gods were physically represented but they did exist. The book was a male teenager who grows up in a small town. I remember he participates in this competition where the elders graded which teenager was the best. It also had something to do with Runes; I don't think it was in the title, but I'm not sure.

If I remember more I will add it on. I really want to find this book so I can read it again.

Update 1: At one point the main protagonist runs into frost giants where he and his friends are they are captured when they are put in an area to fight frost giants.

Update 2: I also believe there is romance in the book (he likes a girl from his town I believe), I don't think that will help but just in case

Update 3: so I don't how I remembered this but in the start of the book I think he somehow forced to do his outside chores in his undergarments or naked (it was winter outside) because his dad got mad at him I think. it's really weird but something I remembered

This is a shot in the dark, but is it Sea of Trolls by Nancy Farmer? 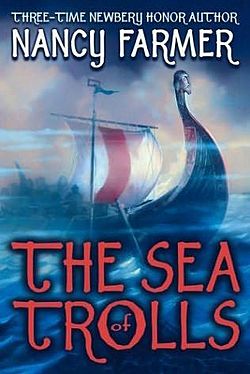 The Sea of Trolls is set in Anglo-Saxon England, Scandinavia, and the mythical realm of Jotunheim.

The Jack Crookleg, the main character of the book is being trained by a famous skald (bard) named Dragon Tongue. About 10 chapters into the book he and his younger sister, Lucy, are captured by Viking raiders. The pair are to be sold as slaves to "Picts" as soon as they reach land. On board the Viking ship Jack meets, and ultimately, befriends Thorgil, a young would-be berserker, and Olaf, the leader of the raiders, along with Boldheart, the crow. The two thralls are spared because Jack is a bard and because Lucy is to be given to the queen, a half-troll named Frith.

The When they arrive at the court nothing goes as planned. Jack is sentenced to menial labor and made to clean the barn. There Jack encounters the deadly troll-pig, Golden Bristles, who is to be sacrificed to the goddess, Freya, by being placed in a wooden cart and left to sink in a bog. After singing Olaf One-Brow's praise-song for the Northman's homecoming, Jack inadvertently makes Queen Frith lose her hair. Queen Frith threatens to sacrifice Lucy (instead of the troll-pig) to the goddess Freya, because Jack set Golden Bristles free. However, Frith allows Jack a chance to save Lucy and their freedom if he can make her hair grow back, which is much more difficult than she makes it sound. Jack goes with Olaf and Thorgil to Jotunheim, land of the Trolls, to seek the mythic Mimir's Well, a well with magical water (song mead) which gives the drinker knowledge, at the roots of the world tree Yggdrasil. Olaf One-Brow is killed by a "trollbear," a gigantic bear native to Jotunheim. Jack and Thorgil are captured by a dragon, but Bold Heart tricks the dragon and enables Jack and Thorgil to escape. Thorgil slays the baby male dragon but gets some blood on her tongue, allowing her to speak with birds. On the way Jack also visits the queen of the Jotuns (Trolls), as he needs her consent to continue seeking Mimir's Well. He finds the tree Yggdrasil and Mimir's Well. Both he and Thorgil drink from the well, and Jack saves some for Rune, a skald (bard) who teaches Jack poetry. With the knowledge Jack gains from drinking from Mimir's Well, he returns to the land of the Northmen to restore Frith's hair.

Not the answer you're looking for? Browse other questions tagged story-identification norse-gods or ask your own question.

13
A fantasy book about runes where the hero learns to chop wood
4
Book or Series name/author-the original book cover has a wizard standing before a door with runes on it
3
Book series, Reincarnation, Different Gods and Goddess?
7
Sci-fi/fantasy book where a female character reads a paper and is sent into Norse mythology
11
Short story collection about ancient gods in modern times
7
A book with two twins and a difficult relation, a room where time flows slower than the outside and a mysterious monster coming from a sink
20
1970s (?) sci-fi book based on Hinduism/Buddhism
6
Young adult/teen maybe children's? Book about a clone (Thriller?)
3
Book with a girl werecat who works for the government