I read a book back in the 80's where an alien race recruited military personnel from the American, Soviet, and Israeli armed forces to fight a war against an invading species.

During flight time on a ship that can configure itself to whatever they need, the humans discovered that the "invading" species were in fact not starting an invasion, but starting their mating season. They devised a plan called Operation Yom Kippur, where they fought against the "invading" aliens, and then immediately turned around and attacked their recruiters whom ended up fleeing before the second attack began. The humans took over the ship in the end and flew home to tell their respective leaders that they no longer owe their allegiance to any one country, but to the planet as a whole.

That is Starstrike from W. Michael Gear 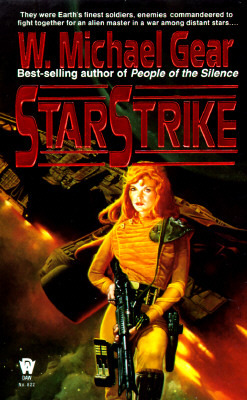 Humanity's first contact with alien life is no less than a nightmare, as the Ahimsa take control of Earth and force humanity to do their bidding. Soon Earth's most skilled strike force, composed of Russian, American, and Israeli experts in the art of war and espionage, find themselves aboard the Ahimsa vessel, training for an offensive attack against a distant space station. And as they struggle to overcome their own prejudices while preparing to face an enemy of unknown capabilities, none of them realize that the greatest danger to humanity's future is right in their midst....

Not the answer you're looking for? Browse other questions tagged story-identification aliens military-sf or ask your own question.