He is related to the X-Men comics in some way, and he wears mostly white. He has a mask that covers everything except for his eyes and the space between them and has telepathy. I think he also carries two guns.

Probably you are thinking of Fantomex, who was introduced during Grant Morrison's run as an X-Men writer. (Which I happened to be buying at the time.) The Wikipedia article on Fantomex says that he debuted in New X-Men #128, published in 2002. 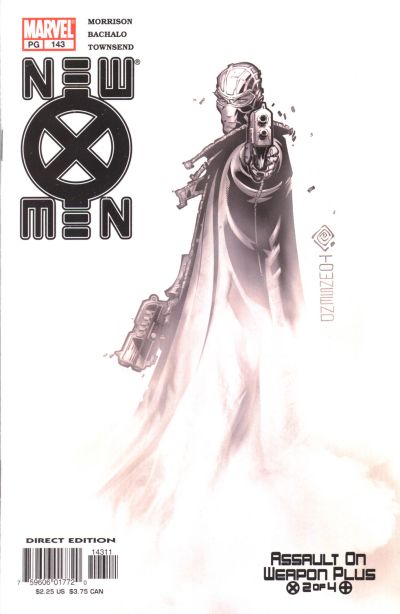 15
Was Xavier's surprise at Magneto's helmet ever retconned?
16
Which Marvel character had a bomb in his heart which would explode when his heart stopped?
7
Why does Wolverine wear a mask (in the comic/animated versions)
22
Do Daredevil's enemies know that he's blind?
11
Did Bryan Singer make up the idea that Magneto's helmet blocks telepathy?
4
What is Deadpool's typical weapon set?
14
Trying to identify an old Marvel Comics robot villain (not Ultron) from the 1970s?
8
Who is this Marvel Comics character?
34
What was the name of the magical robot from Dr. Strange?
12
The Hulk and the Thing fall from space - Marvel comic