Can droids be shut down manually?

Droids in Star Wars are known to have their own personality. Even astrodroids, like R2-D2 or BB-8 sometimes do not listen to a direct order, or do things based on their "moral" evaluation (e.g. when BB-8 told about secret Rebellion base simply because it trusted Finn).

Therefore, it must have happened that droids didn't listen to its owner. I know that there are supposed to be "restriction collars" which pretty much force droids to do what you want them to do, but apart from that, what are other possibilities of enforcing a command on a droid?

Specifically: is there any way to externally turn off a droid? Via a remote or some button located on its metal body? In case the droid don't want to be turned off? I know droids may shut down due to damage (for example ion blast), or because they want to (R2-D2 in Force Awakens), but is there a way for the owner to do it? Or possibly even for non-owner?

Looking mostly for canon answer, if there is such information in any of the books, but any information is fine.

Leia switched off C3PO in "The Empire Strikes Back".

This is a transcription:

C-3PO: "Surrender is a perfectly acceptable alternative in extreme circumstances. The Empire may be gracious enough to—" [Leia switches him off] 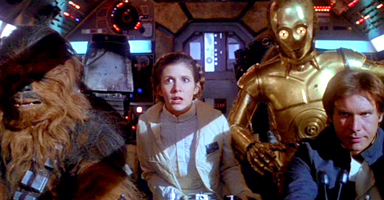 You agreed to include "via a remote" option. Therefore, we can count Invasion of Naboo mass turn-off as young Anakin Skywalker turned off droids because he destroyed the orbital command center.

Another case where that happened is when older Anakin Skywalker turned off all Trade Federation battle droids while assaulting their main command center on Mustafaar.

One singular case of manual turn-off is when Leia switched off C3PO manually during Empire Strikes Back.

If we get a little bit technical then destroyed droids are also turned off, via manually swinging the lightsaber through them or else.

In one of the Force Awakens novelisations (based on an earlier version of the script) Rey turns BB-8 off by flipping a switch.

Rey was stunned. That was more food than she had ever seen in her life. With all that food, she could stop living in uncertainty, worrying about scavenging enough parts for a decent meal. With that food saved up, she could start planning for a future.

She reached down and gently flipped a switch behind BB-8’s head. The droid immediately powered down, his beeping silenced for the moment.

In Star Wars I - The Phantom Menace at about 00:38:54, young Anakin Skywalker turns a mostly assembled but inert C3PO on by pressing a button or switch at the bottom of C3PO's 'neck' just right of centre. Presumably, the same switch/button could be used to turn him off although the body shell added later may inhibit access. 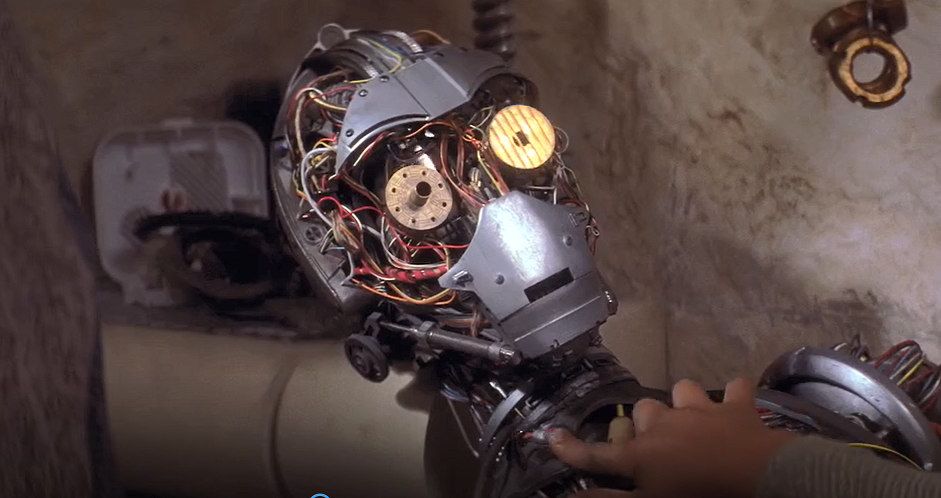 In Legends, this is confirmed to be one of the many functions of the garden-variety restraining bolt. From Wraith Squadron:

Among the many features of the standard restraining bolt, an attachment designed to maintain control over a fractious or independent-minded droid, was an external means to shut off a droid's main power converter.

The way the restraining bolt works is slightly different from the external "reset switches". The normal switches order a soft shutdown, where the droid's volatile memory is stored (hence Threepio's habit of finishing his sentences when he "wakes up") and their program is otherwise put in a safe state to shut down. In contrast, the restraining bolt orders a hard shutdown, where power is immediately shut off throughout the system; this means it works even if the droid's programming is hung or won't respond to commands (because of a software or hardware fault, sabotage, or even modification by an independent droid).

Bolts could be triggered remotely, using a special caller device, or the shutdown function could be accessed manually.

27
Why did C-3PO close down while Luke talked to Ben in A New Hope?

14
Do droids have consciousness?
8
Why do battle droids have personalities?
44
Can astromech droids control and fly the ships they're mounted in?
12
Are droids sentient or not?