Why did the look of Professor Flitwick change in between movies?

As I recall, in the first two Harry Potter films, Professor Flitwick had a long, white mustache that went around his head. However, in the rest of the films, he brown hair, a bowl cut, and a short mustache. Why is this?

It's all down to Harry Potter and the Prisoner of Azkaban director, Alfonso Cuaron. 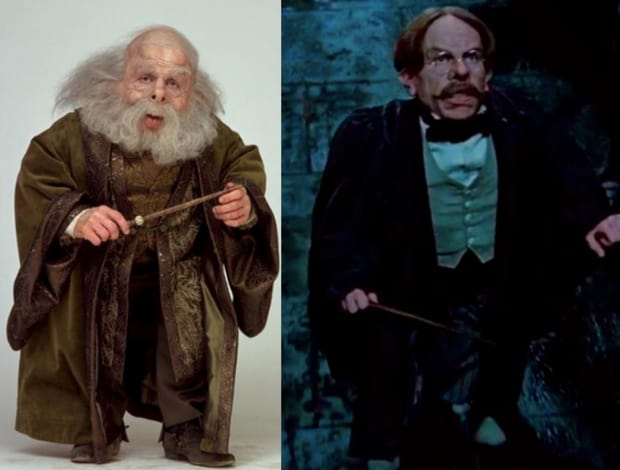 When it came to the third film, of course the looks of the whole films had changed.

Alfonso [Cuaron] really wanted to put his mark on the films. And then a lot of things altered: anything from character looks, to the actual layout of Hogwarts itself.

And another thing was happening at the same time. There wasn't really anything for Flitwick in the script at all, and I got a call one day from the producer, saying basically, "There's nothing for you, but we'd love you to be in the film all the same. How do you fancy coming in and doing a kind of cameo in the film as somebody else?"

And I said, "Well, that's great, thanks for asking. I'm always thrilled to be part of all of this, anyway." So, I went in for a meeting with Alfonso, the director, and Nick Dougland, who's the make-up supervisor, and we came up with this new look for this character who would be basically the conductor of the Frog Chorus in the Great Hall. And so, we went with that.

There's been debate over whether the original Flitwick and the younger, grumpier choir master are the same character, but they are confirmed as the same character more than once, most obviously when McGonagall addresses him as 'Filius' in Deathly Hallows II.

The other reason is that Jo Rowling was unhappy with the initial portrayal of Flitwick. She said in an interview:

I must admit, I was taken aback when I saw the film Flitwick, who looks very much like a goblin/elf (I’ve never actually asked the film-makers precisely what he is), because the Flitwick in my imagination simply looks like a very small old man.

Officially they are not intended to be the same character. However I think the hairstyle in Azkaban is slightly different to the later Flitwick.

19
Why did Alfonso Cuaron change Dumbledore's attire and personality for the third film? And why Michael Gambon?

12
Why would Flitwick teach 16 year olds how to turn vinegar into wine?
45
Why wasn't Professor Flitwick at the Sorting Ceremony? or, If he was, Why was he surprised by Having Harry in his Class?
19
Why did Alfonso Cuaron change Dumbledore's attire and personality for the third film? And why Michael Gambon?
16
Why did Snape stupefy Flitwick?
10
Why didn't Ron and Harry ask Professor McGonagall for help instead of Lockhart to enter the Chamber of Secrets?
5
Was Professor McGonagall's age changed to reflect the casting of Maggie Smith?
4
Did any Hogwarts Professor ever forget their student's name?