Which characters in Game of Thrones / ASOIAF are specified as being left handed?

Of course we have Arya, who is written and played as being left-handed. 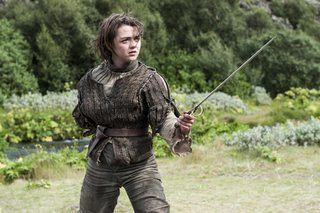 Jaime's left hand becomes better than his right after being cut... but he was born right-handed. 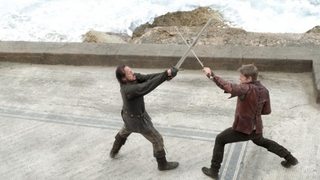 Are any other characters in the Song Of Ice And Fire / Game Of Thrones world specified as being left handed?

After searching the books on "left hand" I found these:

There is a character called Left-Hand Lucas Codd. I can't find why he is called that but possibly because he is left-handed

Arya took her right hand off the grip and wiped her sweaty palm on her pants. She held the sword in her left hand. He seemed to approve. "The left is good. All is reversed, it will make your enemies more awkward. Now you are standing wrong. Turn your body sideface, yes, so. You are skinny as the shaft of a spear, do you know. That is good too, the target is smaller. Now the grip. Let me see." He moved closer and peered at her hand, prying her fingers apart, rearranging them. "Just so, yes. Do not squeeze it so tight, no, the grip must be deft, delicate."
A Game of Thrones, Arya II

As you mention this is Jaime 2.0 rather than from birth but it's close enough.

"A sword with no point and no edge. Get behind me!" He saw something half-buried in the sand, and snatched it up with his good hand. It proved to be a human jawbone, with some greenish flesh still clinging to it, crawling with maggots. Charming, he thought, wondering whose face he held. The bear was edging closer, so Jaime whipped his arm around and flung bone, meat, and maggots at the beast's head. He missed by a good yard. I ought to lop my left hand off as well, for all the good it does me.
A Storm of Swords, Jaime VI

Similar to Jaime he became left handed later on.

Qhorin drew his longsword. The tale of how he had taught himself to fight with his left hand after losing half of his right was part of his legend; it was said that he handled a blade better now than he ever had before. Jon stood shoulder to shoulder with the big ranger and pulled Longclaw from its sheath. Despite the chill in the air, sweat stung his eyes.
A Clash of Kings, Jon VIII

Similar to Jaime he lost his right hand and so is now left handed.

Slynt spun on his heel like the watchman he'd once been, and strode the length of the Small Hall, boots ringing on the stone. He clattered up the steps, threw open the door . . . and came face-to-face with a tall, lantern-jawed man in black breastplate and gold cloak. Strapped to the stump of his right wrist was an iron hand. "Janos," he said, deep-set eyes glinting under a prominent brow ridge and a shock of salt-and-pepper hair. Six gold cloaks moved quietly into the Small Hall behind him as Janos Slynt backed away.
"Lord Slynt," Tyrion called out, "I believe you know Ser Jacelyn Bywater, our new Commander of the City Watch."
A Clash of Kings, Tyrion II

The character is commonly referred to as Left-Hand Lucas Codd so one would assume he is left handed. However, the following points to it being something more with Asha remarking about his famous hand so maybe he isn't.

"I am unwed," announced Left-Hand Lucas Codd.
"And for good reason," Asha said. "All women do despise the Codds as well. Don't look at me so mournful, Lucas. You still have your famous hand." She made a pumping motion with her fist.
A Feast for Crows, The Iron Captain

Similar to Lucas Codd no mention is made as to why he's called Left Hand Lew but we can assume it's because he's left handed.

After Syrio breaks the fingers on his right hand he is forced to use his left. He is at least temporarily left handed.

Four Lannister guardsmen unsheathed their swords. The fifth, with the broken fingers, spat and pulled free a dagger with his left hand.
A Game of Thrones, Arya IV

No explicit mention is shown to him being left handed but he fights with a weapon in both hands so he could be ambidextrous.

The hedgehog was crumbling, the northerners reeling back under the impact of the mounted assault. Tyrion saw Shagga catch a spearman full in the chest as the fool came on at a run, saw his axe shear through mail and leather and muscle and lungs. The man was dead on his feet, the axehead lodged in his breast, yet Shagga rode on, cleaving a shield in two with his left-hand battle-axe while the corpse was bouncing and stumbling bonelessly along on his right. Finally the dead man slid off. Shagga smashed the two axes together and roared.
A Game of Thrones, Tyrion VIII 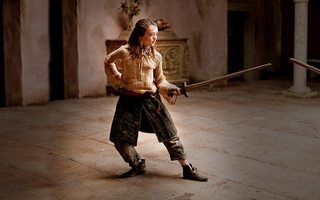 Again same as the books he becomes left handed later on. 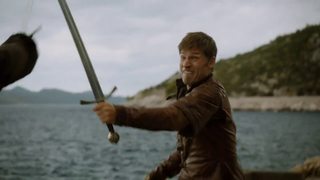 The actor that plays Davos, Liam Cunningha, is actually left handed and so he is in the show. 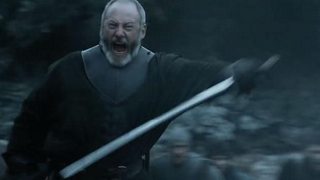 He appears to use his left hand when fighting Jon. I can't find referenec to this in the books so it's probably a similar case to Davos. 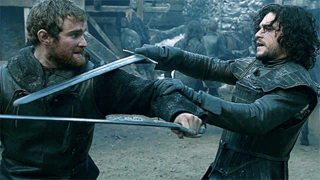 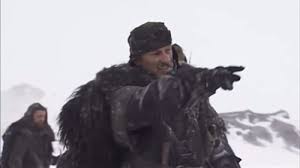 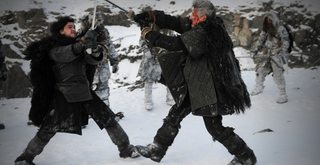 14
Which GoT characters do not appear in ASoIaF?
21
How smart are the dragons in Game of Thrones?
11
What methods to reproduce/copy books are available in the world of Game of Thrones / ASOIAF?
6
How do genetics work in Game of Thrones?
12
Are there any fully noble-born (and acknowledged) bastards in the Game of Thrones TV show?
7
Why did the show appear to swap Casterly Rock and Highgarden?
10
How did Jon Snow know about Lady and Nymeria?
8
Why does Tywin Lannister send Tyrion to King's Landing to be Hand of the King instead of himself?