I remember reading this book about 2-3 years ago (2013-14). It was a book that I think may have been set in a futuristic society? based on a young man/teenage boy who has a job scavenging the shipwrecks by the city. He finds a large wreck of a really expensive ship, meets a girl, and has adventures. I remember that there was some kind of plot twist with his father at the end.

I'm pretty sure that it was the first book of a series. The cover was some shade of brown with a large picture of a ship on it and the author's name was pretty long, I think.

Can anyone help me find this book?

Could it be Ship Breaker, second book in the Windup Girl series? 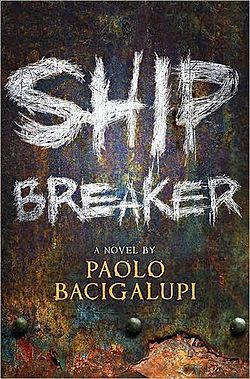 Ship Breaker is a 2010 young adult novel by Paolo Bacigalupi set in a post-apocalyptic future. Human civilization is in decline for ecological reasons. The polar ice caps have melted and New Orleans has been buried underwater. On the Gulf Coast nearby, humanity has reverted to survival mode and a small economy has grown from the scavenging of washed up oil tankers for bits of copper and other valuables.

Nailer is a fifteen-year-old boy who works on the light crew. His mother died when he was a young boy and he now lives with his alcoholic and drug addicted father, Richard Lopez. After a storm, Nailer rescues Nita, the stranded daughter of a wealthy merchant, and helps her to get back home. Unfortunately, this infuriates several parties, including Nailer's father, the local power brokers, and Nita's father's enemies, including Nita's uncle Pyce.

He does indeed find a very valuable large ship with a girl on-board. The closest I see in the summary of a story is that his father tries to kidnap the girl and Nailer fights his father and uses his literacy to win.

I found it by searching for science fiction book series boy salvages shipwrecks on Google.

8
Science fiction anthology with story about a man who kidnaps his daughter's boyfriend
13
Fantasy book about high elf lord, human woman, magic
6
Book about a girl who finds her magic through the help of time travelling witches
4
YA book series about a teenage dragon
13
Story about an assassin who travels to a parallel Earth to carry out an assassination
7
Book about a king who becomes immortal
4
90s (or earlier) book: laptop becomes sentient and helps a teenage boy