Which planet does Leia represent in the New Republic?

In the book Star Wars: Bloodline, Princess Leia is a senator in the New Republic.

All senators that I am aware of in canon represent a planet. For example, Senator Casterfo is from and represents the planet Riosa.

My question is, given the destruction of Alderaan, which planet does Leia represent at the New Republic Senate?

Pablo Hidalgo answered this on Twitter; according to him, she represents the Alderaan sector, rather than the planet: 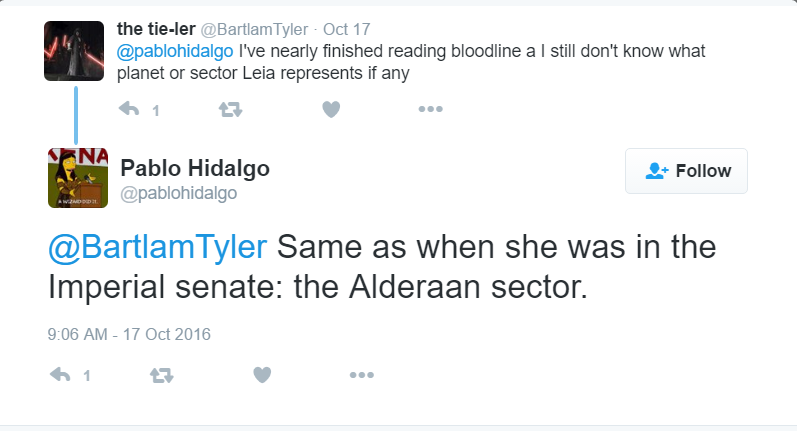 @BartlamTyler: I've nearly finished reading bloodline a I still don't know what planet or sector Leia represents if any

@pablohidalgo: Same as when she was in the Imperial senate: the Alderaan sector.

It seems like a misconception1 that Senators exclusively represent planets; on Twitter, Pablo Hidalgo notes that senators can represent either planets or sectors, based on such factors as population, among others: 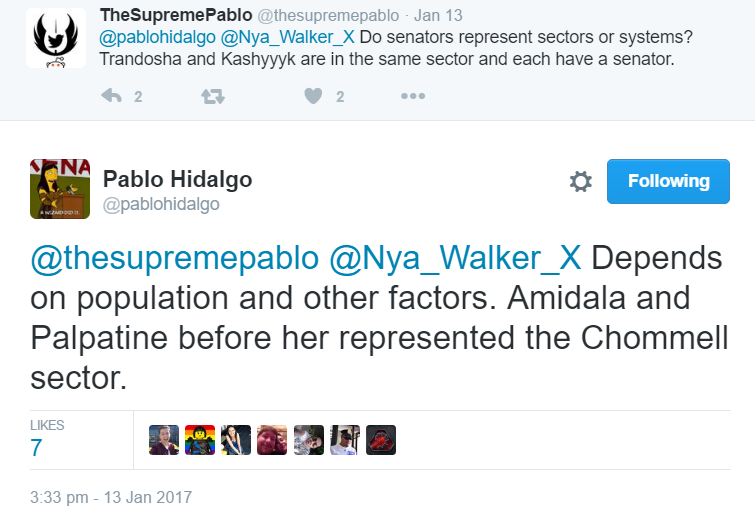 This, of course, leads to the question2 of precisely who she was representing; there are several (not mutually exclusive) possibilities:

1 Or a retcon, more likely

2 Posed by DaaaahWhoosh in comments

4 Thanks to BBlake for pointing this out in comments

She represented the Area Alderaan used to be in.

Not the answer you're looking for? Browse other questions tagged star-wars princess-leia star-wars-bloodline or ask your own question.

39
Why was Naboo important enough to have a seat in the Senate?

34
How did Princess Leia pay Han Solo's reward in Star Wars: A New Hope?
42
Why was the single war between the Republic and The CIS called "The Clone Wars"?
11
Was Princess Leia Organa wealthy?
31
Did Leia's excuse make any sense?
12
Is Kylo Ren a prince?
9
Why did the senate freak out upon hearing that Leia was Vader's daughter?
8
Where does Leia, Princess of Alderaan take place in relation to Star Wars Rebels?
4
Did Han Solo teach Princess Leia how to fly the Millennium Falcon?