I'm looking for a short educational movie that I saw in first or second grade. It was primarily an educational tool, to teach kids about colors, particularly the mixing of colors. However, I was particularly entranced by the sort of magical world the plot envisioned, in which the colors were sentient beings. Since it was the fantasy elements that I found so fascinating, I figured it should be appropriate to ask about it here. I've searched on YouTube but have not found what I was looking for.

The film was animated. I saw it in the early 1980s, and from the style of animation (I remember it as being similar to the "School House Rock" shorts), it was probably made a bit earlier, in 1960s or 1970s.

At the beginning of the film, the human protagonist discovers that the world is all gray; bright colors have disappeared. Then the color Red (a round, bright red blob with some kind of face) shows up, and tells the kid that all the colors have been kidnapped by an evil gray monster. Red has escaped, but the other colors are still being held captive, so the protagonist heads off to rescue them. When he reaches the fortress of the gray villain, the villain challenges him: If he can think of ten things in a given color, the bad guy will let that color go.

The kid thinks, then comes up with ten things for Yellow and Blue. For each of the things he thinks of, the film shows it (using actual filmed images, rather than animation). However, he can't think of enough things for the other colors. But, having released all the primary colors (which are similar to Red, but with different outlines and faces), they can bump together and produce secondary colors. This is illustrated with film of a real kid mixing together different colors of paint from around the edges of a color wheel. In this way, all the remaining colors are released.

Having been defeated, the Gray villain apologizes and says that he only kidnapped the colors because he, Gray, didn't get enough respect as a color. There was a clip of the real kid mixing all the colors together to get a muddy gray, demonstrating Gray was just as legitimate a color, and then they all evidently lived happily every after.

The Gruesome Gray Monster takes all the colors from the world and nobody notices except Kathy. Luckily, the Red escapes and goes with Kathy to the Monster’s gruesome gray castle to get back all the colors. A Coronet release. 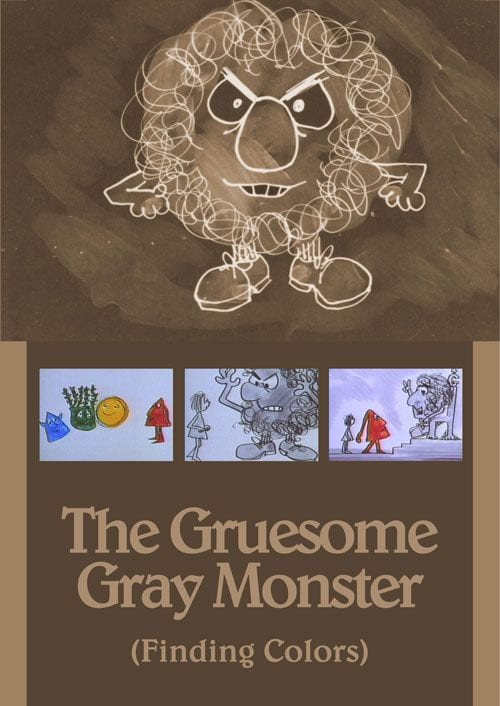 I found this by Googling educational film colours kidnapped by gray monster which turned up this page that sounded promising. Then Googling the name turned up the above link with the image. I can't find much else on this.

Not the answer you're looking for? Browse other questions tagged story-identification movie educational or ask your own question.

4
A 60s-70s movie where a woman crashes spaceship, later stalked and kidnapped by man
15
Comic book with color coded realms
17
Old animated film with bald blue people
6
Kids' fantasy movie from the 80s or 90s?
10
'80s movie with gold female alien
8
An animated film where the enemy's minions fuse with their weapons