In the recently released Batman movie "The Killing Joke", the writers shocked viewers while attempting to add romantic depth to Bruce and Barbara's relationship. The scene that people found most shocking was the scene where Batman and Batgirl go from arguing to fighting to hooking up on a rooftop. This is especially creepy when Batgirl's main relationship in the comics is with Dick Grayson, Batman's adopted son.

Creepiness aside, is there any precedent for this relationship? From what I have heard or read it seems like the writers took it from somewhere, but I am not sure from where.

Are there any other examples of a Batman - Batgirl relationship besides the one given in "The Killing Joke Movie"?

There was one hinted at in the DC Animated Universe cartoons, which was confirmed in associated comics.

A 1999 episode of Batman Beyond1 implies a past relationship between the two:

Barbara: Dick finally got fed up living in Batman's shadow. He decided to leave. He was hurt when I chose to stay behind with Bruce.

Batman Beyond Season 1 Episode 12: "A Touch of Curaré"

This relationship is also hinted at in other DCAU properties, most notably in the TV movie Mystery of the Batwoman2:

Barbara: I just saw the news and was wondering if you got a new partner. Someone a little older?

Bruce: I have no idea who she is.

Barbara: Because if you had, I'd be really upset...because I thought you and I were, you know...

The comic series Batman Beyond 2.0, released in 2014, explored the relationship in a little more detail, revealing that Bruce and Barbara had an intimate relationship while Dick was in Blüdhaven, and that Barbara got pregnant: 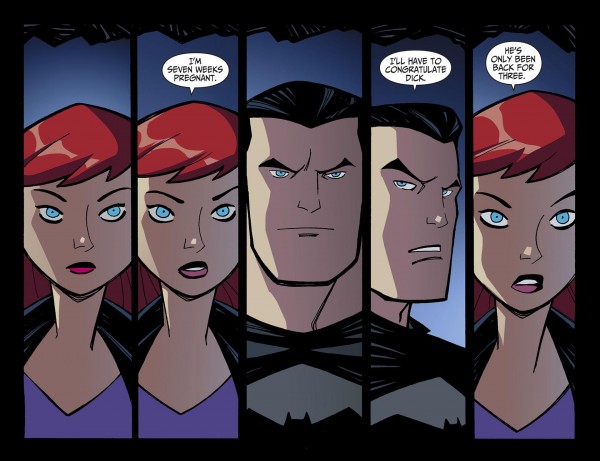 Barbara: He's only been back for three.

To the best of my knowledge, there has never been a romantic relationship between Bruce and Barbara in any of the mainstream comic continuities.

1 For the uninitiated, Batman Beyond was part of the DC Animated Universe, a shared continuity of cartoon shows and TV movies that aired between 1992 and 2006. Batman Beyond was a sequel to the wildly popular Batman: The Animated Series (and its direct sequel, The New Batman Adventures), and is set about 40ish years later

2 Thanks to starpilotsix for reminding me of this in comments

Barbara Gordon as Batgirl was created in 1967. She was added to the 3rd season of the 1960s TV show to give a character for female viewers to identify with and try to increase female viewership, and was a love-interest for Bruce Wayne from the very start - so her relationship with Batman predates any relationship with Robin/Nightwing.

Of course, the portrayal at the time was Bruce Wayne being mid-to-late 30s, Barbara Gordon being late-20s / early-30s, and Dick Grayson being about 18. These days, both Bruce Wayne and Dick Grayson are portrayed as being older (to "make room" for all the later Robins, and to allow Dick to become Nightwing) while Barbara Gordon's age has stayed much the same - most likely so that Commissioner Gordon, her father, won't have already retired!

(Of course, Barbara Gordon was the second Batgirl - the first, Betty Kane, was Robin's love-interest and the niece of Kathy Kane, Batwoman and love-interest of Batman)

Both the DCAU and The Killing Joke are directed by Bruce Timm, and it is in his worlds that this "relationship" spawned and eventually took root. Prior to that, Barbara had been a trusted ally to Bruce, but a lover only to Dick.

There was a very casual dating thing going on with Bruce and Barbara in the 1960s Batman TV show, but again... it was NOT a full on romantic relationship, much less a sexual one.

That scene was thrown into the movie so Bruce Timm could bring his own 'ship to life in a very vivid way in the minds of others. In all other universes, timelines and media franchises to date, it never happened.

Not the answer you're looking for? Browse other questions tagged dc batman batgirl the-killing-joke-2016 or ask your own question.

7
Are any of the names of the Court of Owls victims in Batman #5 significant?
6
Are there any alternative origin stories for Batman?
2
Why couldn't they omit the Batgirl narratives and scene in The Killing Joke movie?
6
What really happened to Batman at the end of The Killing Joke?
7
Did Batman ever date Poison Ivy or have sex with her?
12
What happens to Batgirl after The Killing Joke?
9
What is the nature of the relationship between the Frank Miller Batman and the better-known Batman with the no-killing rule?