Does the Agents of Shield comic have robots?

In the Tv show we are shown Aida. An android built in secret by Radcliffe and then perfected by Fitz.

Are there any such advanced robots in the comics that are "made" by terrestrials? (not counting Ultron)

S.H.I.E.L.D. has had Life Model Decoys for many years in the comics.

LMDs first appeared in Strange Tales #135 (August 1965), in which the spy agency S.H.I.E.L.D. created LMDs of agent Nick Fury to use as decoys for an attack by HYDRA. 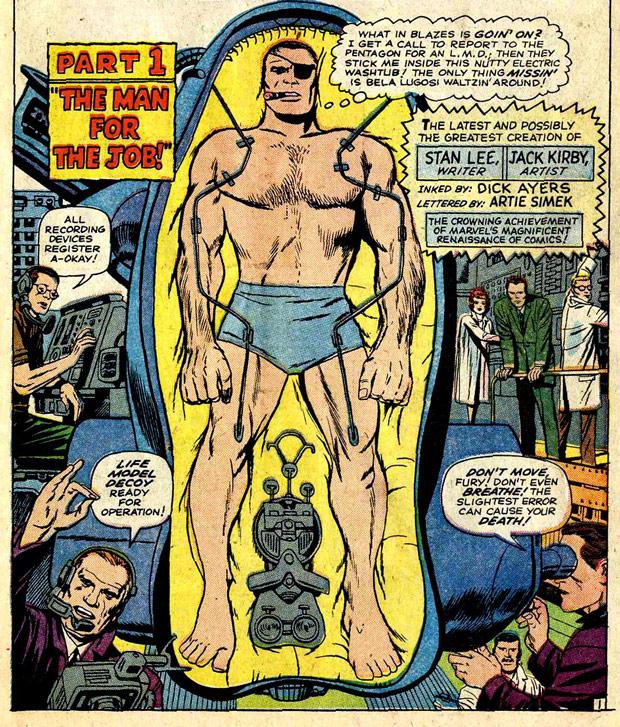 A Life Model Decoy (or LMD for short) is a S.H.I.E.L.D.-designed robot that duplicates all outward aspects of a living person. The owner can see through, speak through, and control everything the Life Model Decoy does. Nick Fury's Life Model Decoys are probably the most common in the Marvel Universe.

It is designed to function as an exact body double for VIPs. Their design is such that they mimic the subject's outer appearance (i.e., fingerprints, hair, all details of the skin), speech patterns, scent, iris and retina patterns, body language, thought patterns (to fool telepaths), and any other biological indicators. Aside from any invasive procedure and vulnerability to strong EMP, they are indistinguishable from the original.

"Life-Model Decoys" often shortened to LMD's are a S.H.I.E.L.D. designed robot that takes the form of a living person, thus making a duplicate of that person.

In 1961, while in France on a mission for Leonardo da Vinci, Nick Fury, his brother Jake, and Thomas Davidson discovered a piece of self-replicating technology dating back to the Renaissance. The technology latched onto Davidson and Jake Fury, creating robotic duplicates of both of them. This technology would later be reverse engineered into the first LMD's.

Not the answer you're looking for? Browse other questions tagged marvel marvel-cinematic-universe comics agents-of-shield or ask your own question.

14
Did the Avengers merely tolerate SHIELD?
4
Picture of Captain Future's Otho that proves he is a robot
12
Adamantium in the MCU?
1
Did Aida have her Inhuman powers inside the Framework?
3
Was there any additional meaning to General Hale’s actions?
7
Why did the Chronicoms not interfere previously?
2
Did this character die in the original, looped Agents timeline?
3
Does Vision have Computer/Machine type abilities?