Does Marvel/Disney have film rights to the Human Torch android?

In Captain America: The First Avenger, we see in the Stark Expo a reference to 'Phineas T. Horton's Synthetic Man'. In Marvel comics, this was the original Human Torch.

Does Marvel actually have the rights to this character, or was this kind of a cheeky nod to Chris Evans playing a Human Torch?

All signs point to Marvel owing the rights. During the late 1960's, Marvel staged a brief revival of the character in Fantastic 4 Annual #4, allegedly to prevent the creator (Carlos Burgos) from regaining the copyright, indicating that they at least valued it slightly.

In fact, Burgos’s claims may have never made it to court; his dark ritual on that summer day may have instead been reaction to a new Marvel comic book. In early August, Lee and Kirby’s Fantastic Four Annual #4 featured Burgos’s original Human Torch, battling the new teenage Human Torch and the rest of the Fantastic Four. Cover-dated October 1968, it appeared exactly twenty-eight years after Marvel Comics #1-in other words, exactly as the initial twenty-eight-year copyright was expiring. The original Torch had been revived just long enough to ensure their copyright claim-only to be killed again, pages later. “Well, let’s face it,” mused the Thing when Burgos’s creation had been extinguished, “ya win a few . . .’n ya lose a few!” Lee had Johnny Storm, the last Human Torch standing, eulogizing his fallen predecessor this way: “He tried to defeat me . . . and yet, I can’t find it in my heart to hate him!”

When Carl Burgos tried to sue for the Human Torch 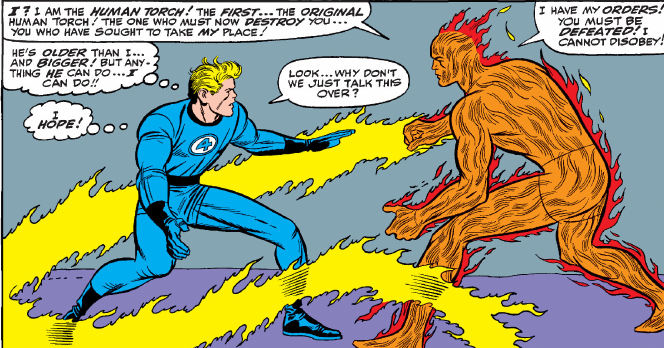 More recently (in 2014) the Human Torch android was featured in All New Invaders, presumably to prevent the image and naming rights from reverting to the creator's estate and possibly coming into conflict with the existing (and more popular) Johnny Storm 'Human Torch'.

For the record, the fact that they're the rights-holder doesn't necessarily mean that Marvel haven't come to an agreement with Fox over the use of the name "Human Torch", just that such agreements are usually shrouded in secrecy. Even if the law favoured them, it seems unlikely that Marvel would risk a multi-million dollar lawsuit (and potentially an injunction against a $100m+ film) just to spite a competitor.

1
Have the two Human Torches ever met?

60
Does Red Skull die at the end of Captain America?
1
Jim/The Human Torch in Secret Avengers?
11
Was tiny guy role in Captain America also played by Chris Evans?
14
What comic books exist in the Marvel Cinematic Universe?
8
What is happening in the second Ant Man post credits scene?
15
Identify a Marvel character with a two-piece magenta mask that does not cover the mouth
4
What changed Howard Stark so much?