This question refers to the guns used by stormtroopers as well as clones, battle droids, etc (but not the small hand-held blasters used by the likes of Han Solo or Rey).

Why aren't trooper's guns capable of rapid-fire like the one used by Jiang Wen's character in the Rogue One trailers?

This answer is helpful here: How are Star Wars blasters properly reloaded/charged/etc.?

Tibanna gas is used to create the ammunition for blasters and is mined from gas giants like Bespin. There is a cost associated with equipping every soldier/gun-wielder in the galaxy with fully automatic weapons and it's not difficult to imagine why not everyone would want to pay that much when a more economical blaster would suffice. 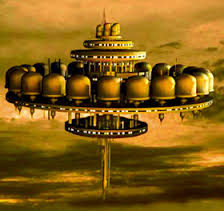 Because rapid-fire weapons tend to be bulky

There are generally drawbacks to automatic weapons. Namely bulk and accuracy. Automatic blaster cannons are difficult to carry and would be poor solutions for folks who plan to carry the gun over a distance. They're a much better fit for stationary defense or short distance operations. They also tend to be less accurate. It would be impossible to use an automatic weapon for long-distance combat where accuracy and precision is more important. An automatic weapon is better in middle-to-short-range situations. 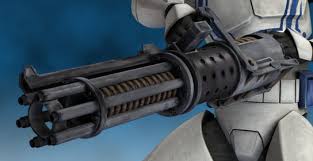 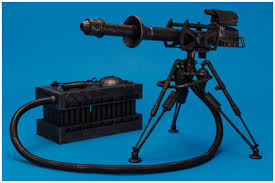 Even in the Rogue One trailer, it looks like his weapon is a bit larger (rifle-sized) and used in a middle distance scenario with either a mount or a ledge to stabilize the fire (it's tough to tell from a screen cap). All of this further illustrates the points listed above.

As a supplement to @TheIronCheek's good answer:

According to the Legends Wookieepedia article on blasters, firing the blaster imparted a significant amount of heat to the weapon. From the article:

A side effect of firing blasters was the gas conversion enabler heating up as gas was energized by the power pack, which could cause blasters to overheat, sometimes to the point of destruction

While I couldn't find anything specific on blaster heat in the Disney canon, I think it's not an unsafe assumption that heat could still be an issue for weapons in the Star Wars universe.

Therefore, from a design perspective, something that must be addressed by blaster designers is how to handle heat. How well the blaster can handle the heat from firing will determine its maximum firing rate. Take, for example the DC-19 "Stealth" Carbine:

...the invisible tibanna mix had to be reloaded after every ten shots, and there was a required cool down time between each individual shot to protect the blaster's dampeners from overheating

Now, all this is Legends material, so take as a piece of canon evidence for blasters producing heat the Z-6 rotary blaster cannon. One way to get around the heat problem as a weapon designer is by adding more barrels, hence we got (in our galaxy) the Gatling gun:

Gatling's solution was to utilize revolving barrels-four on some early models, six on most Gatling guns, so that each barrel had an opportunity to cool as it revolved. Numerous rounds passed rapidly through a rifled barrel cause a tremendous heat build-up.

Therefore, the existence of the Z-6 in canon suggests heat management reasons for having a rotary barrel on what amounts to a rapid-fire blaster. Or, it's just the Rule of Cool.

Not the answer you're looking for? Browse other questions tagged star-wars blasters or ask your own question.

237
Are all stormtroopers as poor soldiers as the ones in the movies?
12
How are Star Wars blasters properly reloaded/charged/etc.?

53
Why did Darth Vader choose to take shots from Han Solo?
5
Were man-portable area deflector shields used in the Clone Wars?
14
How well known were the events of the original “Star Wars” trilogy in the general galaxy? Or was it all about clandestine special operations missions?
84
Why was Han Solo acting like he’s never seen Chewbacca’s bowcaster before?
0
Are Stormtroopers' armor ineffective against Stormtrooper blasters?
29
How do Droidekas fire blasters through their shields?
7
Why didn't the Rebellion use any ion guns to defeat the AT-ATs at the Battle of Hoth, as we saw in Rogue One?
7
Why do Jedi practice lightsaber dueling, and not blaster fire deflection techniques?
9
Why did the colour of the blasters change between the Original and Prequel trilogy?
6
Why aren't tractor beams used more commonly in the Star Wars universe?