How was Thor able to dent Captain America's Shield?

I was reading about Adamantium on the marvel.wikia

This lead me to read about Captain America's Shield

Was the dent caused by Odinforce or Thor's Hammer? Is Mjolnir or Captain America's Shield "the absolute most invulnerable item in all of existence"?

Destruction of the shield

As of 2011, Wikipedia lists that the the shield has been damaged or destroyed several times within the confines of the Earth-616 continuity. On each of these occasions, the shield was subjected to a cosmically powerful force capable of reshaping matter on a massive scale. Specifically, the powers that affected the shield are: 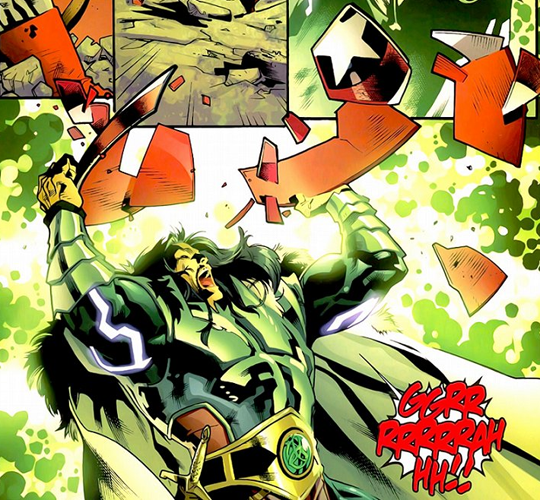 ...the Odinforce - a powerful source of energy - for a number of purposes, including energy projection; creation of illusions and force fields; levitation; molecular manipulation, communicating telepathically with other Asgardians even if they be on Earth and he in Asgard, hypnotizing humans; channelling lightning to Earth from Asgard, controlling the lifeforces of all Asgardians, and teleportation.

It's possible that it was Mjolnir itself that dented the shield. It's a very impressive weapon, and as Gorton says: It's an unstoppable force.

Odin, chief of the Norse gods, ordered the dwarfs to forge Mjolnir. The blacksmiths Eitri, Brok, and Buri used the core of a star as the mold. In the process the star exploded and almost took Midgard (Earth) with it.

Not only was it's construction impressive, it can also take a pounding:

So if it can contain that much energy, it should be able to withstand denting making it more indestructible than Capt's shield. In fact Thor:

It also has a variety of enchantments on on it. Here are some I think that may have been crucial to denting the shield:

With those it would be possible to either redirect some previously tapped energy source and redirect it into the shield, or simply manipulate the matter in the shield to cause it to buckle (or transform a small part of the hammer into Arctic vibranium, adamantium's evil twin capable of damaging adamantium).

However, the hammer may not be that effective against true adamantium, or simply when thrown:

It's debatable whether this is due the enchantments needing skin contact, or Thor just wasn't trying hard enough.

However this is mostly guesswork as the Odinforce is so powerful I'd say it border's on reality control.

Thor's hammer, wielded by regular Thor, has dented true adamantium before with a swing.

Odin powered Thor is stronger than Thor. A stronger Thor would swing the hammer harder. Thus, he would hit harder with mjolnir.

We know mjolnir's metal is harder and tougher than captain america's shield.

Captain America has taken attacks from regular Thor because Thor holds back his power, but also because it is regular Thor.

Matter manipulation or magical abilities had nothing to do with it. Magical abilities are shown and mentioned on panel when they happen or occur. This was simply thor swinging a hammer as he usually does. Except he was just swinging it much harder than usual this time.

Not the answer you're looking for? Browse other questions tagged comics marvel captain-america thor-marvel mjolnir or ask your own question.