The Martian – what happened to all the video log recordings?

Throughout his stay on Mars, Watney keeps an extensive collection of video logs of his activities using the various cameras at his disposal. The Hab and Rover also have continuous monitoring systems. In the movie version, we often see the action from the perspective of these recording devices.

What happens to all this data at the end of the story? Did NASA receive it? Mark couldn't have physically taken it with him on the MAV, since he needed to reduce his weight as much as possible. (Unless his spacesuit has some kind of built-in data storage. Even then, he's never seen downloading the videos, or interacting with the data at all, really.)

His communication with NASA while on Mars happens via a makeshift setup using the Mars probe as a relay. It doesn't seem like it would have the bandwidth to continually upload the video feed, not to mention it's highly unlikely the process could be automated.

Supporting the above point, the movie consistently avoids showing NASA as seeing those videos during the events of the story. All they are going on is satellite imagery, text chat, and the occasional Pathfinder camera image.

Did the video logs reach Earth eventually? Or were they all left behind on Mars?

Actually, as I found in this answer here, and from Valorum's answer to this question. People surrounding this book and film can be pretty responsive to emails. So I emailed Andy Weir (I hope you don't mind me blacking out my name), but this was his reply: 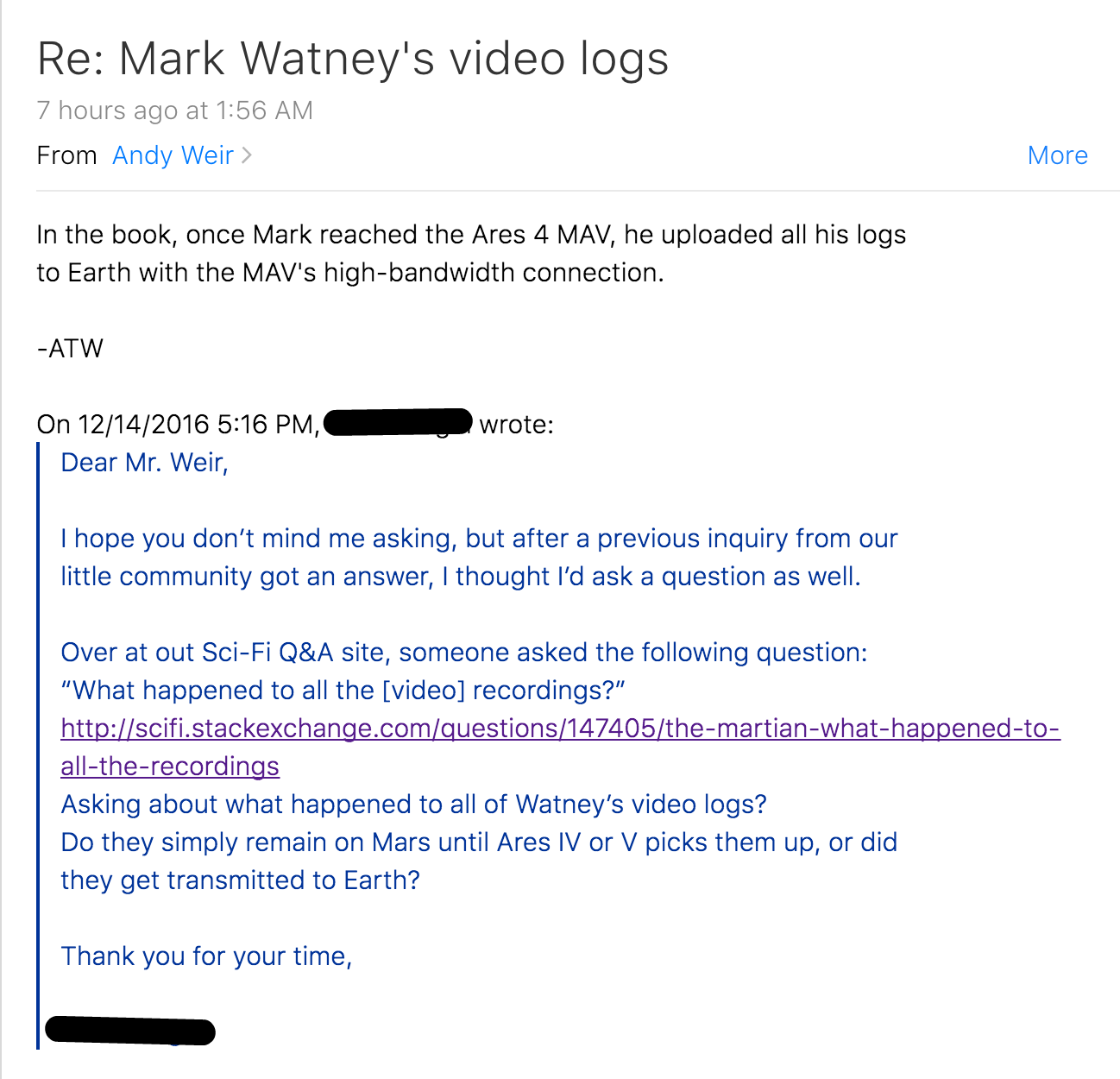 So according to him, Mark uploads the logs and sends them using the Ares 4 Mav, although I have no recollection of that happening.

With regards to the movie...

We don't know
To elaborate, nowhere in the script from when Mark reaches the Schiaparelli Crater, to when the MAV takes off does he upload them or are they discussed.

INT. ROVER - ARES 4 MAV SITE - DAY
TITLE: Sol 538
Mark stares at the camera with a look that says, “Oh jesus these JPL guys are gonna get me killed.”

EXT. MAV - DAY
Mark stands at the base of the MAV. He holds a large wrench in his hand, almost like a weapon.
As Mark stares up at the MAV with a gleam in his eyes...

INT. MAV - DAY
Mark tears the acceleration chairs out of the cockpit.

EXT. MAV - DAY
WHUMP. One after another, the acceleration chairs hit the dirt in a pile. WHUMP.

EXT. MAV - DAY
WHUMP. The controls hit the dirt. The pile is growing.

INT. MAV COCKPIT - DAY
Mark waits in the airlock with a mess of stripped equipment.

EXT. MAV - DAY
The outside of the MAV now looks like the set of Sanford and Son. Mark wrenches one of the MAV’s hull panels free.

EXT. MAV - DAY
UP ABOVE: The nose airlock breaks free, and tumbles down towards camera, BLACKING OUT FRAME.

EXT. MAV - DUSK
FROM BLACK, we FIND MARK. He’s sitting on a hill slope, surveying his handiwork.
The MAV has been TRANSFORMED. The whole front has been torn off. Hab canvas now covers it. Equipment litters the area all around us. Junkyard on Mars.
Mark just sits. Exhausted.

After that section the only mention of Mark on Mars is strapped into the MAV waiting to launch. As Santa said, the book uses written logs whereas the film uses video logs, and as Andy Weir's email references the book, we have to look at the film separately. However, Andy Weir tells us that the MAVs had high-bandwidth connection which would allow for video transmission nearly as well as text transmission, so the best we can do is to assume that Ridley Scott and Drew Goddard had similar intentions to Andy Weir, having Mark Watney send them back to Earth via the Ares 4 MAV.

In the source novel his logs are in text format, not video. At one point (after retrieving the Pathfinder) he makes an assertion that he should be more careful with his logs,

However, ultimate fate of his logs is left undisclosed in both media.

If you're asking about the films, then there is little chance he could take the logs with him. Logs seemed to be pretty HD (at least 720p), which would make them pretty bulky, disk space-wise. To take all of them home, he'd need a hard drive, which he couldn't store in his suit.

He did have USBs with crew's entertainment, but I imagine it would be insufficient to hold all of his logs.

And when you think about it, his logs only hold sentimental significance. Was he dead, NASA would try to rescue his logs (with his body) to collect information. But since they have a living Mark Watney, they could just ask whatever it is they're curios about (Potatoes? On Mars?!) directly to him (as pointed out by Andrew Thompson in comments).

Ok so after watching the movie I dont remember if Mark actually ever holds the crew memory sticks in his hands on screen or not. (feel free to set me straight on this one) so I googled a bit and got redirected to Pineterest for stuff from the Martian set. Amongst the items are these 2 usb sticks. 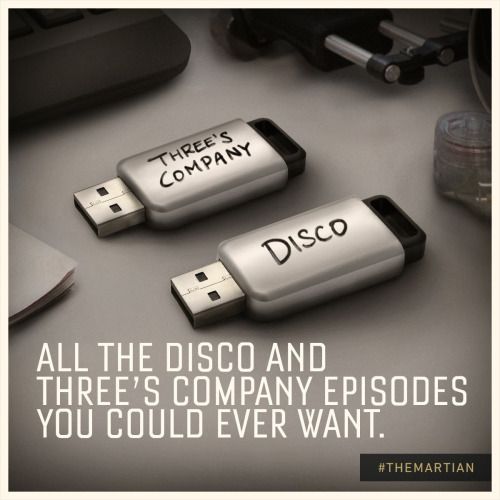 They look like they could hold 512 GB of data pretty easy. So I googled a bit more and found a link to Amazon where I was able to find a pretty small disk that could hold 512GB of data. (now remember these disks are able to hold more and more data every year. So if we go a few years in the future a USB stick like this one will prob be able to hold 1TB in a very few short years)

So as an experiment, I took 1 video I have on my phone and tried to see what I could do with it. (Bear in mind that I'm a novice at this. Never had any reason to compress files before.)

Using only 1 compression program (that I found in a YouTube video after I googled "compression") and 4 minutes of my time I got the video down.

Now if I wanted to I could first render the video with some software and then use compression to get it further down in size if I knew that the size was a problem. but I managed to shave a CONSIDERABLE chunk of the video size in no time at all using 2016 technologies.

The movie is set in the year 2035, just under 20 years from now. It has all the NASA gimmicks and doo-hikies, so by 2035 I would imagine that you could very, very easily put a years worth of personal logs on a very small and portable USB disk without any kind of "technical" issues that we are facing today with current technology.

(This last part is a bit speculative and raises questions and what ifs so bear with me please.)

Who is to say that file size will even be a problem in 30 years time?

That the documents cant be compressed to a mere fraction of the "normal" video size while it is being recorded.

Mark is a genius for surviving so long on his own. Who is to say that he didn't find a way to send his logs back to earth somehow or to the ship returning for him at some point before he left base camp.

71
Why does Watney’s notebook in The Martian have four holes?
48
What happened to Mark Watney's entertainment pack?

13
How was MAV fuel plant able to make fuel using hydrogen so quickly in the end?
12
Does the Hermes aerobrake in Andy Weir's "The Martian"?
31
How did Mark Watney manufacture oxygen in The Martian?
32
What constitutes a "Sol" cycle in the film "The Martian"
18
Why no Russian involvement in The Martian?
17
Meaning behind Rich Purnell's email in The Martian
24
What programming language is used in The Martian?
4
The Martian: How did they get there?