I’m looking for a fantasy book with a female protagonist with red hair, who climbs a sacred rock and sparks civil unrest

I am looking for a book with a female protagonist that has red hair.

Her family and culture are seafaring, I feel like they are similar to Vikings. They are merchants, and she (I can’t recall if she stows away on the ship or is allowed to come with because she is finally of age) travels with her father to another continent. The culture there doesn't allow their women to be seen in public, and they must be covered head to foot at all times. One woman in particular was engaged to be married to some lord’s son, a particularly vile boy, who beats and sexually assaults his servants.

Protagonist arrives at this market, and climbs their giant sacred rock (she has some connection to stone, rock magic, something). A bunch of old dudes from this patriarchal culture see her standing majestically on the rock, red hair streaming, where no woman is supposed to ever go. In order to protect her, the father cuts off her hair, maybe dyes it black to make it seem like she’s a boy.

After that, it gets real fuzzy. Civil unrest is sparked, some tents burn... the young lady that has to be covered all the time runs away?

The end is a war scene, the Viking-esque society is attacked and a town destroyed...

The cover is light blue, and I think features the protagonist sitting on a big ass rock.

Sounds like it could be the Fool's Gold series by Jude Fisher. The first book is called Sorcery Rising. I've been looking for this series myself, and I think this might be it? I do remember reading Sorcery Rising a long time ago, so I'm hoping this is it.

Sorcery Rising takes place in an initially magic-poor world, and it was, let me say, a genuine pleasure to see it carried off in such an interesting and believable manner. Politicking, customs - all were well-executed. However, this is changing. Sanctuary, hidden among icebergs and tundra, is about to release its fugitives: Virelai, the apprentice to Sanctuary's magical master, the Rose of Elda, an enigmatic, beautiful, and strangely-motivated woman, and a cat - Bete - in whom Sanctuary's master has enclosed his magic. An odd choice? Yes. Meanwhile, Katla Aransen and her family also travel to the Allfair - this time as merchants. Bearing pattern-forged blades and semi-precious sardonyx, they aim for profit: but will find something totally unexpected, because the magicless world is changing. Tycho Issian intends to sell his daughter to evade debt and win himself an alliance; the Vingos to purchase themselves a bride. King Ravn of Eyra likewise seeks a wedding: with both politics and passion to consider, his choice will be a difficult one. But as the world changes, no plan will leave unchanged, as these disparate plotlines are brought together in a fantastic conclusion at the Allfair.

The cover of the second book, Wild Magic is indeed largely blue and has the protagonist, Katla, on a large rock. 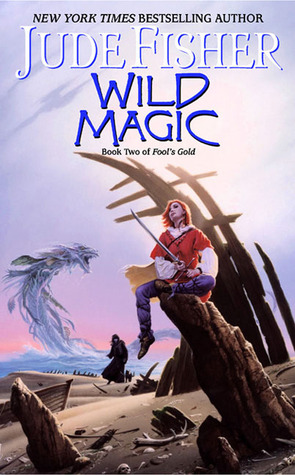 The cover of the first book could be argued to be largely blue, but the woman on the cover, perhaps Virelai's succubus, is on a floe of ice. 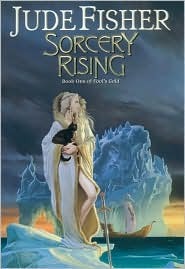 9
What was the fantasy novel with a fire/fertility goddess named Fala and a sea god named Sur?