In Star Trek Voyager the character Seven of Nine is supposed to 24 years old when "liberated" from the Borg by Janeway et al.

She was assimilated by the Borg in 2356 at age six, along with her parents, but was liberated by the crew of the USS Voyager in 2374.

This, however, doesn't seem to jive with when the Federation became aware of the Borg. The Federation is first exposed to the Borg in Q Who?, which took place in 2365. This puts Seven and her parents being assimilated 9 years before the Borg and the Federation were introduced. But if this was the case, then the Borg would have "been aware" of the Federation prior to Q Who?, which would be at odds with Guinan's warning to Picard.

Reflecting upon events in Ten Forward with Picard, Guinan says that the encounter with the Borg happened before it should have, and for the moment, the Borg are only capable of seeing the Federation as "raw material to them". And because they are now, Guinan begins, "aware of our existence," "they will be coming," Picard continues. Guinan ominously says, "You can bet on it." [emphasis mine]

The only explanation that keeps these details from countering each other is that the Borg had been attacking the Federation prior to Q Who?, and for some reason the upper echelons of the Federation and Starfleet kept this threat hidden from the Captain of the current Starfleet flagship, which in my opinion seems unlikely. Therefore, the only remaining explanation is that Seven lied about her age for some reason. If this is the case, then how old is Seven of Nine really?

I can find no instance in which the Federation or the Hansens knew what they would be investigating.

After a great deal of persuasion, the Federation granted the Hansens the use of the USS Raven, a small long range craft, to aid them in their investigation.

As exobiologists one could presume they would be interested in all alien life forms. They happen to stumble upon the Borg and chase it down via the transwarp conduit. I don't see anywhere where they sent data back to the Federation. One could also speculate that someone as brilliant as Magnus (who invented the multi-adaptive shielding) could have wiped all records of the Federation from the databank thus leaving no where for the Borg to go looking for the Federation.

Regardless, there's no way to know if Guinan was aware of that the Borg were aware of the Federation, just that Q had messed with the timeline (which she can tell with her 'powers'). If she knew that the Borg should encounter the Federation after the date that Q intervened, all she can say is "Now they know we exist", not "Now they know we exist, and I'm certain they didn't before". If the Raven being assimilated is in check with the timeline, she won't be aware of it.

Seven of Nine is in her mid-twenties chronologically, but older biologically.

There's an episode of Enterprise ("Regeneration") that makes the Borg's attacks on the Federation part of a chronological paradox; Borg from First Contact are reactivated after being found in Antarctic wreckage, assimilate a transport ship, and make a beeline for the Delta quadrant. The Enterprise manages to destroy them while never getting much information on them, but the Borg get a signal out before they're destroyed, which should reach the Delta quadrant in a couple of centuries.

That signal is why the Borg were headed so far out of their way toward Federation space in the first place -- though the disappearing bases along the Neutral Zone meant to be foreshadowing of the Borg early in TNG have always been an inconsistency -- presumably since the signal said that the Federation is both a desirable target and should be assimilated before they become too strong. 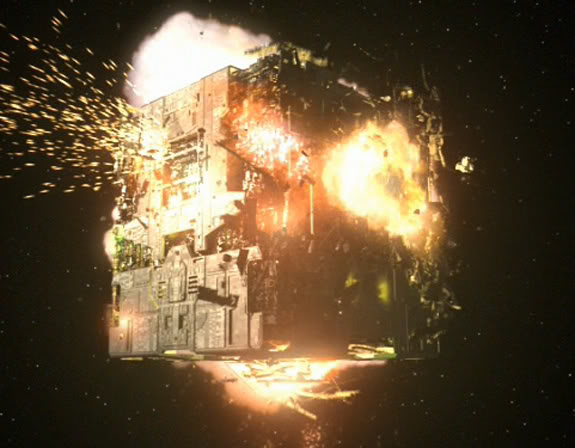 The brief encounter the 22nd century Enterprise had with the Borg, as well as contact with Borg survivors like El-Aurians (Guinan's race, whose firsthand knowledge of the Borg was also limited according to Guinan's description: they were not present for their homeworld's assimilation, they were probably offworld and got reports of what happened and fled as far as they could) in the 23rd century segment of Star Trek Generations, clearly indicate SOME Federation awareness of the Borg, just not the details. The Hansens were curious and went to research them based on this information. Once assimilated, the Borg probably noted humans as a technologically significant species but not a priority one, presumably focusing on more advanced or biologically interesting races, or ones closer to their own space, until the signal arrived and made humanity a higher priority.

What's confusing about Seven's age is that she was 6 when assimilated, then placed in a Borg maturation chamber to make her into an adult, and she says in several episodes that she was part of the collective for 20 years. Even if she was in the chamber for 5 years and you count that as part of the time, physical maturity plus 15 years makes her definitely older than 24 (and presumably older than the actress, Jeri Ryan, who was 29 when the character was introduced).

Of course it all just boils down to sloppy writing. Writers concerned with the needs of an episode or film over franchise continuity kept changing everything about the Borg (only assimilating technology to assimilating people as well, being a collective entity with no figurehead to having a queen, taking a year to travel 7,000 light years to traveling almost instantly all over the galaxy via transwarp conduits, etc.), and some just threw in inconsistencies for no good reason (human Borg who were assimilated at Wolf 359 -- such as in the Unitmatrix Zero two-parter -- despite the ship being destroyed shortly thereafter, for instance).

Not the answer you're looking for? Browse other questions tagged star-trek seven-of-nine or ask your own question.

127
What are Guinan's powers from Star Trek: TNG?
19
What were Q's reasons for exposing the Enterprise to the Borg?

44
What does "Seven" and "Nine" mean in "Seven of Nine"?
1
Does each drone have a copy of entire Collective memory?
34
Why does Locutus refer to Riker as "Number One?"
90
Was Voyager really significantly slower than the Enterprise-D?
14
Is Sisko referring to the events of First Contact here and if so how does it affect things?
41
Why wasn't it possible to completely de-borgify Seven of Nine while it was possible with Captain Picard?
36
Why doesn't Seven of Nine wear a Starfleet uniform?
10
How did the Enterprise crew learn of Guinan's ability to perceive nonlinear time?