How could a Star Destroyer hover over a city in Rogue One?

In the Rogue One trailer—as well as the actual film itself—we see a Star Destroyer hovering directly over a city on the planet’s surface.

How is it possible?

I thought that all capital ships were built in space, because they were too heavy to lift from the planet’s gravitation after completion.

In the movie, the Star Destroyer hovers over the location for a long time. There are no Repulsorlift that could hold that much weight in the air, so how is that possible?

From the Battlefront: Twilight Company novel, which is part of new canon:

"We're in atmosphere," [the Star Destroyer captain] said, embarrassed at his own urgent tone. "We need full power to stay aloft. Any disruption at all - " Star Destroyers were extraordinary vessels, capable of razing mountains and carrying armies. But their mass was measured in millions upon millions of tonnes, and their energy requirements were vast.

It implies that Star Destroyers are perfectly capable of operating within atmospheres, it just draws a significant amount of power (presumably repulsorlift technology is used to keep aloft, though there may also be ventral thrusters). This is supported by numerous depictions of Star Destroyers operating within atmospheres in Rebels, and Star Wars: Attack of the Clones Incredible Cross-Sections (which is Legends) noting that the massive Lucrehulk core ships use repulsorlift technology to land.

This image, from Star Wars Rebels: 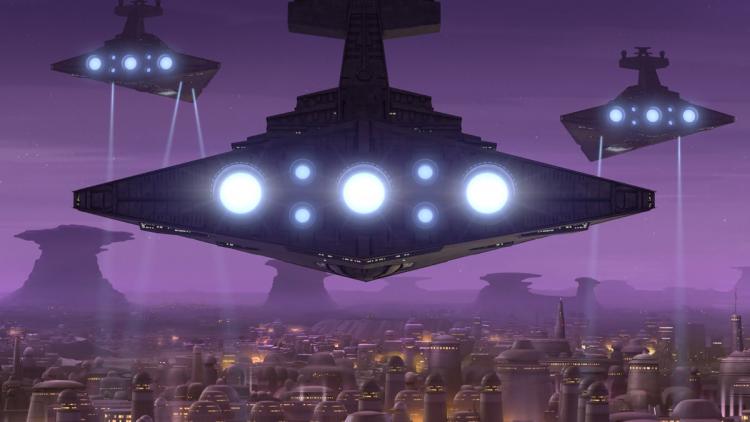 Rebels is canon, so therefore Star Destroyers are quite capable of operating in a planet's atmosphere.

David BDavid B
3111 bronze badge
2
Add a comment  |
Highly active question. Earn 10 reputation (not counting the association bonus) in order to answer this question. The reputation requirement helps protect this question from spam and non-answer activity.

4
Why did the ships fall into orbit?

76
How did the Death Star move?
16
How did Finn's TIE fighter destroy the turbolasers on the Star Destroyer?
17
Did Rey's flight of the Millennium Falcon conflict with known Super Star Destroyer schematics?
7
How come the Shield Gate cannot shield itself?
34
Does this cut material from Rogue One still appear in the novelisation?
3
Is the size of the Death Star depicted inconsistently in Rogue One?
12
Why would Director Krennic be held responsible for the breach on Scarif?
10
How is this TIE fighter landed in the Death Star?