How much time passes between Rogue One and Episode IV?

How much time passes between Rogue One and Episode IV?

Given the ending of Rogue One, it seems as if it may be as little as a few minutes, but could be days or weeks.

Is there any canon source, or any overlooked details of either movie that might answer this?

Somewhere between ten minutes and a couple of hours

According to The Hollywood Reporter, who spoke with an anonymous on-set source in May 2016, the two films are only separated by about ten minutes1:

"This is the closest thing to a prequel ever," a source tells THR. "This takes place just before A New Hope and leads up to the 10 minutes before that classic film begins. You have to match the tone!"

While Leland Chee said on Twitter that it was no more than a couple of hours, and potentially not even as long as that: 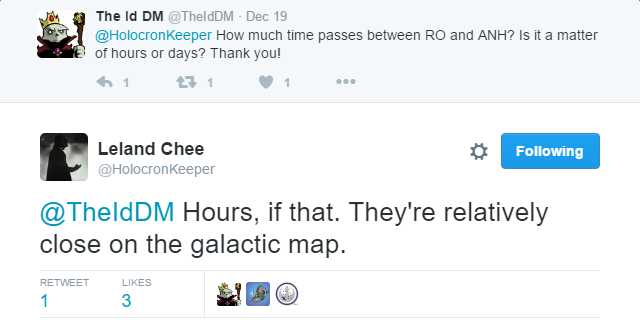 @TheIdDM: How much time passes between RO and ANH? Is it a matter of hours or days? Thank you!

@HolocronKeeper: Hours, if that. They're relatively close on the galactic map.

Although this may seem difficult to believe, it's worth keeping in mind that Rogue One ends with the Tantive IV fleeing Scarif in hyperspace:

"Star Destroyer closing!" called the officer at the tactical console. Raymus didn't recognize the face — one of Raddus's men.

He erased the fear from his own expression. "Get us into hyperspace," he said.

With Vader in hot pursuit:

Vader clenched his gloved hand until the man’s neck snapped. Then he tossed the body aside. He activated his comlink and barked to his stormtroopers, "Find their escape vessel."

Darth Vader chased his quarry, seeking solace in the final triumph of the Emperor.

Since Leia already knew where she was going, there are only two events that occur between the end of Rogue One and the beginning of A New Hope:

We don't know how long it would have taken Vader to track the Rebel ship; the canon novel Tarkin suggests that it's basically impossible to track a ship in hyperspace, and Vader only manages to do so in that novel because the ship he's tracking is carrying his own meditation sphere; later in the book they're forced to resort to statistical inference and psychological profiling to determine targets, both of which take time.

However, we have every indication that the actual trip wouldn't take long at all; Entertainment Weekly's Ultimate Guide to Rogue One, which was produced in collaboration with the filmmakers, included an updated galaxy map showing just how close Scarif (red circle) is to Tatooine (blue circle): 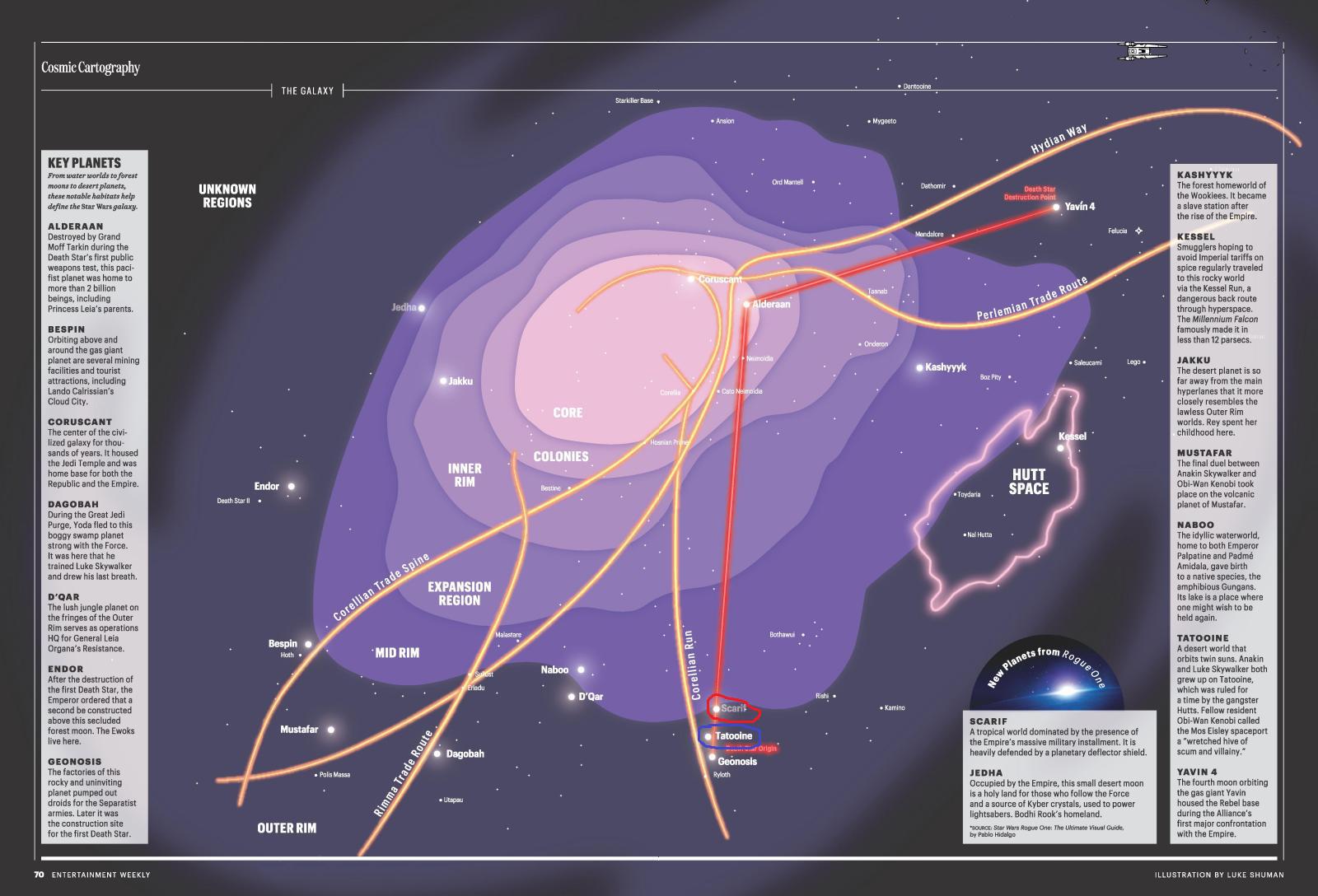 They are quite close indeed, and it doesn't surprise me that it would only take a few minutes to travel between them at lightspeed.

Here's what appears the be the progression of events. I can't say it's 10 minutes (seems too short), but it couldn't have been more than a day or two

My personal bet is either they sent out a ton of probe droids, ESB-style, or they put out a bounty. Both have precedent in other movies

If you've read Lost Stars, which is supposed to be official canon, then timeline gets even more complicated.

Ciena mentions the rebel attack in Rogue One but doesn't know much about what happens. At least 3 weeks later (and about 50 pages in the book) she's aboard the Devastator as they captured the Tantive IV. So if you're going by this it was at least 3 weeks between end of Rogue One and New Hope.

Doesn't really make sense so too bad they already screwed up the new canon. But it's minor, still great movie and book.

I recently saw an interview with John Knoll, the VFX supervisor at ILM who came up with the initial story concept for Rogue One.

He mentioned that the ending of Rogue One is a direct handoff that takes place a few minutes before Ep IV a New Hope. Not sure this is the definitive end-all answer, but it's the most credible source I've seen that explains the timeline.

As we saw, C-3PO and R2-D2 were at the Rebel base on Yavin at the time of the battle, and then they're on Tantive IV at the beginning of A New Hope.

This leads me to believe Tantive IV stopped back at base before embarking for Tatooine... so maybe a couple days at least?

22
Who was the mentioned jedi in the Rogue One movie?
30
How did R2-D2 and C3P0 end up with Leia?
6
Is Twilight Company in "Rogue One"?
10
How much time passes in Rogue One?
6
Length of time from Rogue One to Battle of Yavin
5
Time between Evazan/Baba appearances on Jedha and Tatooine?

23
When was Luke Skywalker conceived?
14
Over what period of time do the events in “The Force Awakens” take place?
7
Who is really responsible for the Death Star project?
8
How much official communication was there between the Senate and the Jedi Council?
7
Are there any Star Wars Canon usage of 'Hyperdrive Radio' prior to Rogue One?
3
Is the size of the Death Star depicted inconsistently in Rogue One?
10
How much time passes in Rogue One?
3
How much time passed between seasons 2 and 3
6
How did Darth Vader trace the rebel spies to Princess Leia?
5
Time between Evazan/Baba appearances on Jedha and Tatooine?