Why does Captain Antilles in a New Hope say they're on a diplomatic mission?

Given the ending of Rogue One...

...it is obvious that the Imperials and Vader know that the Tantive IV ship was just engaged in a rebellion battle.

Therefore why does Captain Antilles, while getting choked by Darth Vader, say:

We intercepted no transmissions. ... This is a consular ship. We're on a diplomatic mission.

Why would he say such an obviously false lie? Especially when it is his last words?

Saying you're a Rebel scum with stolen information: you get tortured and killed 100% sure, and fail your mission 100% sure.

Lying your zhopa off and claiming (reasonably valid, technically speaking) Diplomatic immunity: slight chance to delay Empire or even get out of this alive, meaning there's slightly less than 100% chance you get tortured and killed and fail your mission.

Pablo Hidalgo was asked this question on Twitter; according to him, the mere fact of being on a consular ship is enough to give the crew diplomatic immunity: 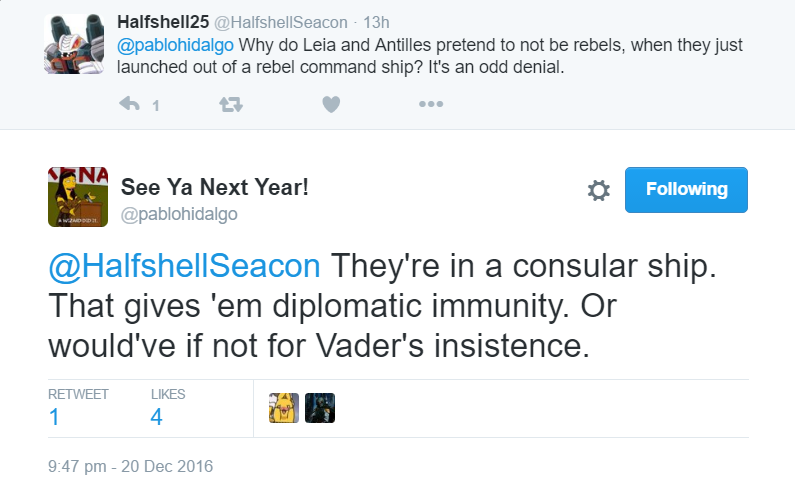 @HalfshellSeacon: Why do Leia and Antilles pretend to not be rebels, when they just launched out of a rebel command ship? It's an odd denial.

@pablohidalgo: They're in a consular ship. That gives 'em diplomatic immunity. Or would've if not for Vader's insistence.

Vader, of course, has no respect for that sort of thing, and knows that those rules are going to be meaningless soon anyway, once the Imperial Senate is dismantled.

Remember that, at that point, the Senate still was functioning, to the point that the Death Star had to be kept secret, so it was reasonable to assume that their diplomatic status would grant protection, evidenced by how Leia reprimands Vader.

It was briefly after those events that the Emperor disbanded the Senate and the Empire stopped pretending it was in any way democratic, turning to fear as a means of control.

IN any case, as others have pointed out, it's the same as someone caught red-handed committing a crime claiming to be innocent even on the face of overwhelming evidence, in order to force the authorities to undergo due process.

Presumably, unless they were spectacularly incompetent, the Tantive IV was not broadcasting its ID and/or diplomatic status when they fled from the battle, and only turned it on when they were clean away.

One Corellian Corvette looks pretty much like every other from the outside, so unless the Imperials could match specific identifying details to the ship that ran away from them at the end of Rogue One, technically as long as they keep insisting they're a Consular ship on a diplomatic mission, Vader would be obligated to honor their diplomatic immunity or the Senate would certainly frown at the Emperor in a most disappointed fashion and tell him such things are not acceptable, and if Darth Vader persists they will certainly write a strongly worded letter about it.

It's a diplomatic fig leaf, yes, but it's all they have -- well, all they think they have, because the Senate has been dissolved and the Emperor no longer even pretends to care about what they have to say, but they don't know that yet.

This has been addressed in the canon storybook Star Wars: From a Certain Point of View. In short, the Tantive IV had the legal protection of the Senate. Theoretically that should have been enough to grant them free passage, even if the Empire suspected them of espionage (in much the same way that real-world diplomats often hide behind diplomatic immunity).

Unfortunately for Leia, the urgency of the situation, the upcoming dissolution of the Senate and the fact that Vader had no qualms about destroying the Tantive IV meant that her legal immunity was pretty much useless.

“Surely it will not come to that,” said Corla Metonae, Tantive IV’s chief petty officer and a long-serving retainer of the Organa royal household. “We’re still flying under a diplomatic flag. The Empire would not dare board us.”

Raymus considered that; technically it still held true. The Tantive IV was officially a consular ship that Leia used in the performance of her duties as Alderaan’s representative in the Galactic Senate. As a diplomat, she enjoyed special legal protections that meant not even the Imperial military could board, search, or in any way impede the free passage of her ship without her express permission. It was a broad and very convenient privilege that in the past had allowed her and Raymus to conduct acts of espionage and subterfuge right under the Empire’s nose. But now Raymus found himself doubting, given the apparent import of what had been stolen from Scarif, that it would be enough to protect them this time.

Star Wars: From a Certain Point of View - "Raymus" by Gary Whitta

Refuge in Audacity. "We were working backchannel negotiations to try and come to a peaceful solution to the problem these rebels were creating when the ship we were on suddenly took off with us aboard and they told us nothing, and there was a battle and it was horrible but fortunately we made our escape when something happened! And of course we were shooting back! You started shooting at us! We were within our rights as stated in the Treaty of Albuxijanumok to shoot back when faced with such aggression! For all we knew, a crew of rebels had seized control of a star destroyer!"

Not the answer you're looking for? Browse other questions tagged star-wars a-new-hope continuity rogue-one or ask your own question.

2
Why did Leia give her emphatic "diplomatic mission" excuse when confronted by Vadar?

115
Why does Leia's accent change during A New Hope?
28
Why does Darth Vader opt to physically strangle Captain Antilles at the beginning of “Star Wars” (1977) instead of “Force Choking” him?
34
Does this cut material from Rogue One still appear in the novelisation?
11
Why was Darth Vader's cape fluttering at the end of Rogue One?
6
How did Darth Vader trace the rebel spies to Princess Leia?
28
Why did Admiral Piett allow the Shuttle Tydirium to pass?