I watched this movie when I was a kid. It's been more around 15 - 20 years since I watched and it suddenly popped in my mind.

It was made during 90s highly possibly. It was set in future (shocker..) where people was transmitting their conscience into empty bodies they rented in their destination via a company instead of physically travelling there. I remember it as their original bodies were stored in the company facilities during their away time.

As i remember lead role was a businessman who got mixed in a criminal event because of body swapping.

Another hint is there was no gender restriction so a man could rent a female body and vice versa.

Also there was a thin string like tool which they used to cut stuff.

Can you name the movie?

Country of origin: Hollywood possibly. Setting was set in USA as I remember.

Protagonist: As I remmeber he was a businessman using this method to travel for business. Method is very common in the setting of movie.

There are two scenes I vaguely remember.

Lead role and a 'female body' was having sex and there was a dialog about 'singing nipples' ( That kinda stuff caught my attention probably due to my age. Also I watched it dubbed in my native language so original line may not be exactly that but translates to that )

Lead role met the original 'conscience' of that 'female body' in another place and time when 'she' was in another body. They recognized each other by the 'singing nipples' anecdote and then got caught by bad guys. 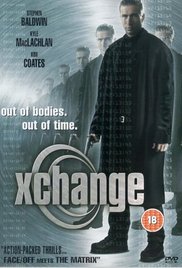 Not much information to be found.

In the near future, a company called Xchange owns a mind transference technology that enables instantaneous travel by swapping bodies with someone at the destination. A member of the privileged corporate class ("Corpie") Xchanging for the first time unwittingly switches bodies with a terrorist. Forced to hide in a limited life span cloned body with just 2 days remaining, he races against time to stop the terrorist and regain his body.

There is a reference to molecule-thick cutting wire in an imdb user review.

In the full movie, a brief scan reveals:

10
50s or 60s movie similar to Invasion of the Body Snatchers
5
90s Mixed sci-fi and fantasy medieval show where the villain is captured and he went insane
7
Horror movie where mirrors are a gateway to Hell
8
What animated movie had reptilian aliens attacking a city surrounded by a force field?
4
Sci-fi story with androids, nano-machines, robot dogs and time travel
6
Movie played on Sci-Fi about people with blue or green blood
7
Movie - 80s to 90s Era, Possible Vampire and/or Sci-Fi