How does the Wizarding World print newspapers and books?

I know that this kind of question seems to stupid, but in the wizarding world, there is no such thing as 'computers' or 'printers'.

How do they manage those kind of things, unless they use Muggle stuff?

Luna was not there: the thing that was making such a racket was a wooden object covered in magically turning cogs and wheels. It looked like the bizarre offspring of a workbench and a set of old shelves, but after a moment Harry deduced that it was an old-fashioned printing press due to the fact that it was churning out Quibblers.

It's not entirely clear from the text if they're using offset printing (the kind that prints from a negative) or movable type (the kind where you use letter blocks) but it seems likely that it's the former given the presence of rollers. In the film you can clearly see that it's a roller-printer.

On top of that, pictures in muggle newspapers don't typically move so there's probably something magical in the ink used. 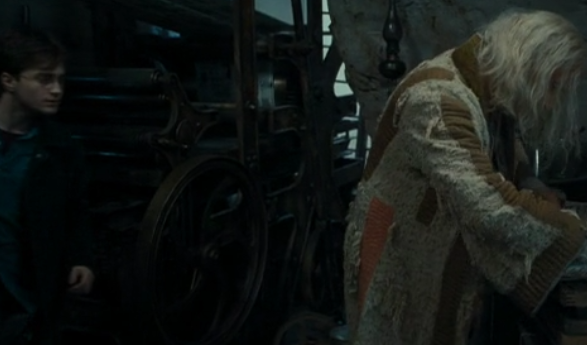 Harry paused to watch them, for the effect was quite mesmerising. They were all waving and twiddling their wands in unison, and squares of coloured paper were flying in every direction like little pink kites. After a few seconds, Harry realised that there was a rhythm to the proceedings, that the papers all formed the same pattern, and after a few more seconds he realised that what he was watching was the creation of pamphlets, that the paper squares were pages, which when assembled, folded and magicked into place, fell into neat stacks beside each witch or wizard.

371
Why don't Muggle-born wizards use Muggle technology to fight Death Eaters?
21
What keeps Hogwarts (or Hogsmeade, or Azkaban) from being shown in the Google Maps satellite view?
6
Mathematics absent from the wizarding world?
11
How do Muggle Wars affect the magical world?
15
Would Gringotts convert Wizard money to Muggle money?
4
Did Muggles and Wizards Ever Co-Exist?
1
Isn't it weird that no one in the wizarding world, especially the muggle borns ponder about muggle sciences?