Were the black armor Stormtroopers supposed to be Dark Troopers from Legends?

Throughout the film, we see a number of stormtroopers in black armor, most notably in the opening scene where Jyn's father is brought into service for the Empire. Unlike the Stormtroopers we see and hear later in the film, they don't seem to communicate with words, but rather some kind of muffled sounds in a tone that reminds me of the battle droids from the prequel trilogy.

Are these Dark Troopers from Legends continuity, which originated in the video game Star Wars: Dark Forces? These were droids that were designed as specialty Stormtroopers around the time of the Death Star.

They are Imperial Death Troopers; the Databank describes them thusly:

The elite soldiers of Imperial Intelligence, death troopers are encased in specialized stormtrooper armor with a dark, ominous gleam. These soldiers serve as bodyguards and enforcers for Director Krennic, a highly placed officer within the Advanced Weapons Research division of the Empire.

In contrast to the Dark Troopers of Legends, who were actually advanced battle droids1, Death Troopers are more akin to Stormtrooper special forces. Despite all appearances, they are fully organic.

What's with the voice?

On Twitter, Pablo Hidalgo remarks that the Death Troopers aren't meant to be understood by non-Death Troopers: 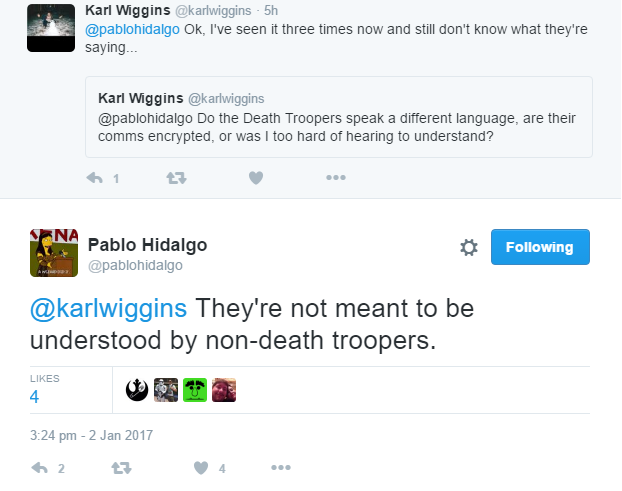 @karlwiggins Do the Death Troopers speak a different language, are their comms encrypted, or was I too hard of hearing to understand?

@pablohidalgo They're not meant to be understood by non-death troopers.

Which suggests that their comm chatter was encrypted.

1 With some exceptions; the Mark III Dark Trooper could also function as an exoskeleton. I really hated that boss fight, incidentally.

3
Why do death troopers sound so different to other Imperial troops?

5
What were the Jedi supposed to do after the assassination of Chancellor Palpatine?
17
Are old order stormtrooper helmets more sight restrictive than clone helmets?
27
Do we ever see regular (non-stormtrooper) ground troops?
67
Are Stormtroopers paid or rewarded in any way for their service?
34
Does this cut material from Rogue One still appear in the novelisation?
11
Were the Stormtroopers on the Death Star ever intended to be a ground assault force?
12
Does any explanation exist clarifying what happened to the escape pod R2-D2 and C-3PO used at the beginning of the first “Star Wars” film?
12
Does Solo serve as a Stormtrooper?
13
Which predictions of The Rise of Skywalker: Darths & Droids Bingo were correct?
18
How does R2-D2 — or any astromech droid — routinely get into and out of a T-65 model X-Wing in the timeline of the original trilogy?