The Star Wars universe has two memorable Rebel Admirals, Raddus and Ackbar. Both are Mon Calamari. 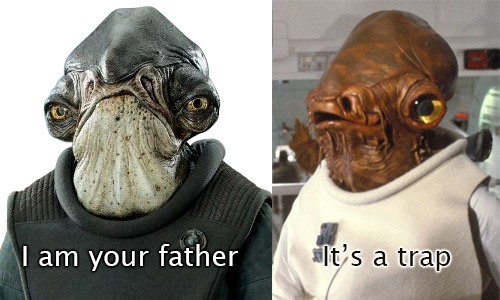 We don’t know, but probably not

While we have no explicit confirmation that they are not related, the odds of two random Rebellion Mon Calamari being related aren’t particularly high. We are dealing with an entire species, after all, one that has been seen on multiple planets, and has at least one that they call their own.

In addition, according to Pablo Hidalgo, Ackbar and Raddus hail from different regions of Mon Cala.

Yep, that’s right. Fans of the squid-like species can get excited for more Mon Cal. New variations of the famous aliens will show themselves in the next installment of the Star Wars franchise. These guys will be even more adaptable and might look a little different. As reported by Lucasfilm Story Group’s Pablo Hidalgo, “Rogue One will show us Mon Cal from the colder polar extremes. Ackbar and the other ones we’ve seen so far are more tropical (and colorful).”

Again, this certainly doesn’t preclude Ackbar and Raddus from being related, but it does make it less likely.

The ship admiral raddus has is a mon calamari mc75 cruiser but home one is mc80 and the mc75 is made for poler areas. But raddus is a poler calamari making him no way near related to ackbar

Not the answer you're looking for? Browse other questions tagged star-wars return-of-the-jedi rogue-one or ask your own question.

9
Who developed the overall plan for the attack on the Second Death Star? Was it Admiral Ackbar?
10
What is the difference between a general and an admiral?
6
What does the interior of a Corellian Corvette’s bridge look like?
9
Does Rogue One create a plot hole in Return of the Jedi re Hyperspace Radio?
2
Is a Hammerhead Corvette the only ship type capable of safely ramming other ships?
4
How many rebel ships were at Eadu, compared to the Death Star run?
7
Which would win in a battle between a Mon Calamari star cruiser and an Imperial Star Destroyer?
10
Are there any "classic" species in Disney-era Star Wars movies?
5
How does Kylo Ren escape from his attack run on the Raddus hangar bay?