Is Newt going to be the protagonist in the sequel to Fantastic Beasts?

Newt Scamander is the protagonist of Fantastic Beasts and Where to Find Them. However, the story is about

The next movie is going to be set in Paris. Will Newt be there as the main character?

Newt ‘is the key to all this’ and will remain central to the story.

In an interview on the set of Fantastic Beasts: Crimes of Grindelwald, David Heyman was asked about if it was difficult to keep Newt as the focus of the franchise reveals Newt is ‘the key to all this’ and will remain central, though other characters are also significant and the story encompasses many characters who all have parts that are sometimes separate from each other’s.

Press: Can you talk about keeping this franchise focused on Newt, when you’ve got Credence’s story coming up now and his journey, and then you have Dumbledore and Grindelwald’s eventual meeting? So is it sort of difficult to be sure that Newt remains sort of the key to all of this?

David: I think Newt is key to all this. But I think it’s also quite novelistic in the sense it’s a very rich tapestry and we’re exploring all of these characters and you’ll get to know them all. There'[re] multiple elements. All these characters are not together in every scene. Many of them have their separate parts, and we follow them all. So Newt is central. But the other characters are really significant.
- Crimes of Grindelwald Set Visit Interview - David Heyman

So from this, we can conclude that Newt will be the protagonist in the sequel. In addition, the question David Heyman was asked was about keeping Newt as the focus of the franchise itself, so his statement about Newt remaining ‘the key to all this’ may also apply to the rest of the sequels.

Yes, Newt is going to play a significant role in the sequel.

According to new information released on Pottermore recently, Newt is certainly going to be a fairly significant part of the next movie. He's going to be teaming up with Dumbledore to stop Grindelwald, who escapes from prison and starts recruiting new followers.

Here's a short quote from the article confirming Newt's role in the sequel:

The latest from the studio is that, in the new film, Grindelwald wil ‘make a dramatic escape’ from MACUSA custody, forcing Albus Dumbledore to join the wizarding world’s efforts to stop him.

The villainous Grindelwald has been busy ‘gathering more followers to his cause – elevating wizards above all non-magical beings’. Dumbledore will look to his former student Newt for help.

The principal photography, the phase of production where they actually are filming the action of the movie, has started, so we're able to get a more concrete idea what will happen.

Note: Gallifreyan actually found this information out and posted it as a comment above. I didn't know this at the time I posted this answer, but he deserves credit for finding it first.

The next movie now has a title, “Fantastic Beasts: The Crimes of Grindelwald”. From what we know, it’s clear that both Grindelwald and Dumbledore will be a much bigger part of this movie than the last one, but Newt is still clearly a significant part of the story. The title doesn’t have Newt’s name in it (the way that the Harry Potter books all had Harry’s name in them) but Newt is mentioned as playing a significant role in the next movie. He’s featured in some of the promotional material released, such as the sign from his book launch and his travel papers. He’s not explicitly stated to be the main character, but he is referred to as the “main hero who will be returning”.

Familiar faces return
Our main hero Newt Scamander (Eddie Redmayne) and his friends – No-Maj New Yorker Jacob (Dan Fogler) and sisters Tina (Katherine Waterston) and Queenie Goldstein (Alison Sudol) – will all return in this next film.
Everything we know about Fantastic Beasts: The Crimes of Grindelwald so far (Pottermore)

While it’s not stated exactly how big his role will be, from his clear presence in the promotional material (including being in many of the pictures posted on the Twitter account for Fantastic Beasts to keep people interested), it could reasonably be assumed that he’s at least one of the main characters, and possibly the main character.

Producer David Heyman says Newt won't be the protagonist all the way through:

"I don't think [Newt will be at] the heart of all of them," Heyman told Cinema Blend. "I think he'll be part — so will Tina, Queenie and Jacob — will be part of the next one."

But JK Rowling says he will: 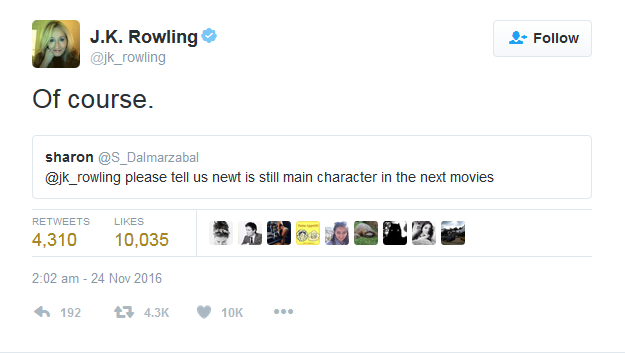 @S_Dalmarzabal: please tell us newt is still main character in the next movies