Why was Vader talking about "Rebel transmissions" in Episode IV when he saw the data tape being passed in Rogue One?

In A New Hope, Darth Vader on Tantive IV says: “several rebel transmissions were beamed aboard this ship from rebel spies…”.

Except that, in Rogue One, we see that the plans were NOT beamed onto Tantive IV - it was docked inside Mon Calamari flagship, and the plans were physically sneaker-netted through a door from one rebel to another as a data tape - witnessed by Darth Vader!.

Vader clearly knew what the tape was from the novelization:

The voice of a stormtrooper spoke to him through his comlink. “A data tape was recorded on the bridge just before we boarded. No sign of it here.”

The security door opened a mere crack and rebel hands shoved the tape through. Vader reached through life and matter and air and by will alone he pulled. He fueled his will with rage and fear and need. It was enough to tear the rebel from the door and drop him at Vader’s feet.

But it was not enough to claim the tape.

He grasped the rebel sprawled before him by the throat, lifted him and stared at him through bloody lenses. “Where,” Vader demanded, “are they taking it?”

Is there an explanation for this discrepancy?

There certainly were transmissions from Rebel spies on the planet's surface to a Rebel ship in orbit.

It is true that the transmission was to the rebel flagship, and from there it was brought on a data tape to the blockade runner in one of the flagship's hangar bays.

There are a couple of plausible explanations:

because as we all know, Anakin/Vader is not very good at taking responsibility for his actions.

Either he thought Tantive IV was an escape vessel, not its own ship, or he didn't see the data tape

Pablo Hidalgo has been asked this question several times on Twitter (once by yours truly), but his most helpful response is probably this long Twitter thread from late December 2016; in it, Hidalgo pretty much confirms that this is an inherent contradiction between the film and the novelization: 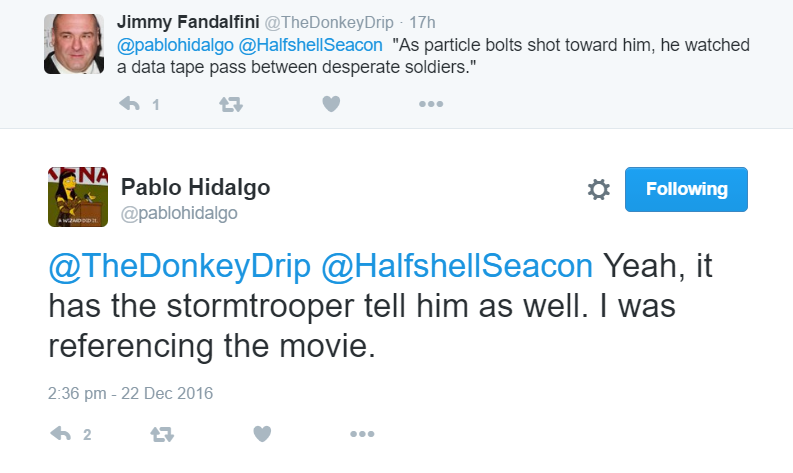 @TheDonkeyDrip "As particle bolts shot toward him, he watched a data tape pass between desperate soldiers."

@pablohidalgo Yeah, it has the stormtrooper tell him as well. I was referencing the movie.

He does provide a rationalization for this earlier in the conversation: 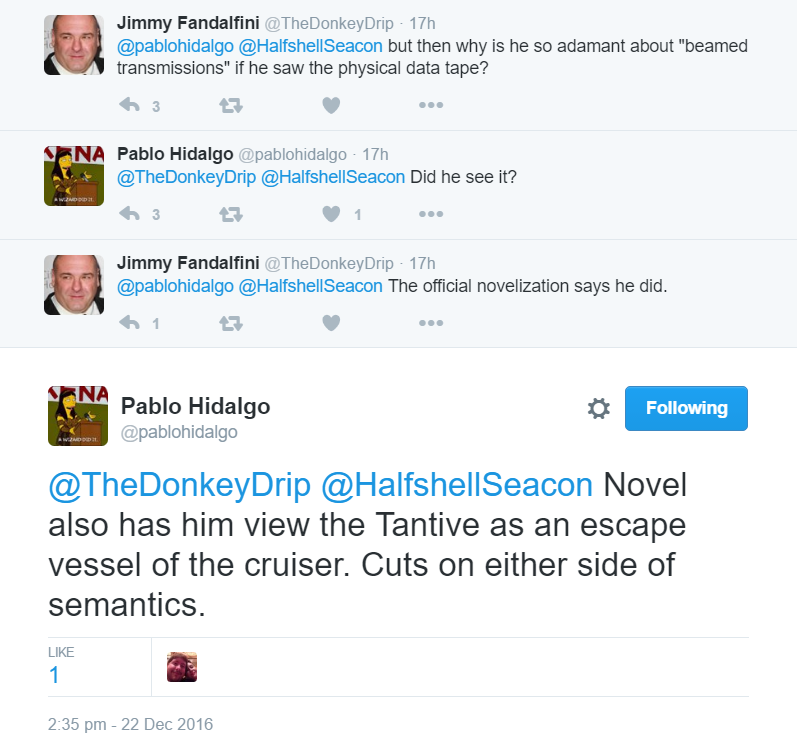 @TheDonkeyDrip but then why is he so adamant about "beamed transmissions" if he saw the physical data tape?

@pablohidalgo Did he see it?

@TheDonkeyDrip The official novelization says he did.

@pablohidalgo Novel also has him view the Tantive as an escape vessel of the cruiser. Cuts on either side of semantics.

The passage he references is probably this one from the novel:

"Where," Vader demanded, "are they taking it?"

Vader clenched his gloved hand until the man's neck snapped. Then he tossed the body aside. He activated his comlink and barked to his stormtroopers, "Find their escape vessel."

So you have two options:

27
Why didn't Vader Force Pull the Death Star plans into his hand on the Rebel flagship?