Film about asteroid impact that claims to be another film

Between 2004 and 2010, I bought this pirated DVD which had the title Deep Impact or Meteor, I forgot which one. Basically the movie is about an asteroid or comet hitting Earth, and nuking it was not an option, because it will just cause more debris. So they evacuate the area of the impact, and let the asteroid impact that area.

Here are the details:

Could it be the 1997 TV Movie, Asteroid? It does have a mass evacuation:

Later on, Lily and Max check Helios' trajectory and realize that it will indeed hit the Earth. Their numbers show that Helios will hit in the Kansas City area within about 48 hours. They tell the president about it and he orders that the city be evacuated ASAP. Ultimately a fragment of Helios strikes a dam in the Kansas City area, causing flooding in the city. Wallach, who drives into the city to rescue two stranded firefighters and a drunk driver who struck their vehicle, gets caught in the flood. He and the firefighters survive, but the drunk driver dies.

The second asteroid (there was Eros and Helios) is apparently going to be worse, so they do try to shoot it down, but with mixed results.

Unfortunately it is discovered Eros will hit also and will be an extinction-level event. The United States attempts to destroy Eros using lasers mounted on three jet fighter aircraft, but one of the lasers is damaged when the jet carrying it takes off and climbs to altitude through a violent storm. After making some last-minute adjustments, the lasers on the other two aircraft are used to seemingly destroy Eros, unfortunately, it is discovered that the mission was only partially successful. Instead of destroying the asteroid, the lasers broke it into many small, yet deadly pieces.

The largest piece and several smaller fragments of Eros hit Dallas, Texas, where Lily's son and Lily's father are. The city is devastated by the impacts and blast of heat. Lily desperately searches the city for her father and son who survive the blast and aftershocks, but her father ends up trapped and hurt in the ruins of the hospital where he worked and her son Elliot wanders off trying to find help. After a search, Lily locates her father and with the help of nearby firemen, rescues him, but goes on to try to rescue Elliot while the soldier who accompanied her goes back to base, although a fireman does accompany her. The two search the ruined city and finally locate Elliot in a large impact crater created by the largest fragment. Jack shows up to help in a helicopter, having learned their location from Lily's former escort. He rescues Elliot and the four return to base where they watch the comet pass by Earth and are relieved it won't return to cause trouble for another 4,000 years. 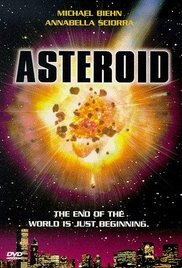 You may be thinking of A Fire in the Sky (1978). This TV movie features a comet on course to hit Phoenix, Arizona. There are scenes of traffic-clogged highways, although I don't remember the highways being used as airstrips. Nuclear weapons fail to stop the comet. The main character watches and dies as the comet destroys Phoenix (at 2:07:24 in this video):

The movie's name is Futureshock: Comet Impact (2007)..I was also looking for this movie. 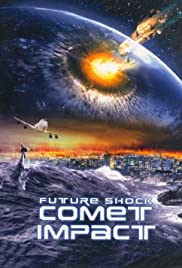 Astronomer Neil Gant fails to predict a comet hitting Ireland with disastrous consequences. However fear for a repeat gets his sky-watch program more NASA-resources. This time an approaching series of comets is detected in time, but only to calculate they're too large and fast to be eliminated. The target area, around Pennsylvania, is determined and hastily evacuated in a race against apocalyptic time.

10
Looking for an old German book about a journey to another planet (approx. from the 30ies)
16
What was that movie where people drilling in an asteroid awaken a monster?
14
Help me identify this B-movie about plant-like aliens that crash land
11
What sci-fi novel has the moon split into 7 pieces by an asteroid, threatening life on earth?
11
Movie where in the end, a guy has to manually detonate a nuclear bomb to destroy aliens
6
80s American movie about a military experiment that opens a gate into an underground realm
17
Story about time traveling tourists who come back to witness human tragedies
5
A children’s show I can’t seem to remember the name of