Has Darth Vader ever been exposed to the vacuum of space?

After reading Hugo's answer to this question, I learned that Darth Vader's famous suit was designed to ensure his survival in almost any environment

even the vacuum of space

My question is, are there any examples of Vader having to deal with this situation, for instance, walking across the surface of a moon or an asteroid? I am fairly certain this never happened in any of the films, but did this kind of thing ever happen in any of the comics or novels? I will accept answers drawn from the old Expanded Universe as well as the currently defined canon.

I recall this happening at least once in Marvel's Darth Vader comic series, but it's more convenient for me to quote the canon novel Lords of the Sith:

Vader hit a switch and depressurized the interceptor's cockpit, his armor shielding him from the vacuum. Then, as he neared the transport's midline, still swinging his ship left and right to dodge the incoming fire, he selected a spot on the transport adjacent to the gun bubble and, using the Force, took a firm mental hold on it.

His interceptor streaked toward the gun bubble, aimed directly at it. Content with the trajectory, he unstrapped himself, overrode the interceptor's safeties, threw open the cockpit hatch, and ejected into space.

Immediately he was spinning in the zero-g, the ship and stars alternating positions with rapidity. Yet he kept his mental hold on the air-lock handle, and his armor, sealed and pressurized, sustained him in the vacuum. The respirator was loud in his ears.

Lords of the Sith Chapter 1

I believe that TIE fighters are not pressurized vessels (according to in manual storytelling from the TIE fighter game), meaning that while Vader was piloting a TIE fighter during the Death Star battle scene in Episode 4 his suit would have been serving that purpose and protecting him from the vacuum.

Yes. In the film:

It's hard to tell you what this spoiler tag spoils, without actually doing the spoiling. But, well, you can probably guess what I'm going to say.

At the end of Rogue One, just after the Death Star plans have been narrowly evacuated from the Alliance cruiser, Vader stands over the docking port and stares into space where the escape pod / shuttle once stood.

Interestingly, his black-clad troopers are there with him, so their gear appears to be equally protective against the vacuum of space.

Yes. In addition to the previous answers, this has happened to Darth Vader also in a Legends comic book by Marvel, To Take The Tarkin. Here, a group of Imperial officers conspire and try to assassinate the Sith Lord. They remotely open an airlock door behind him and the atmosphere of the depressurizing corridor pushes him out of the ship. Only with the power of the Dark Side, Vader is able to pull himself back in from the space. 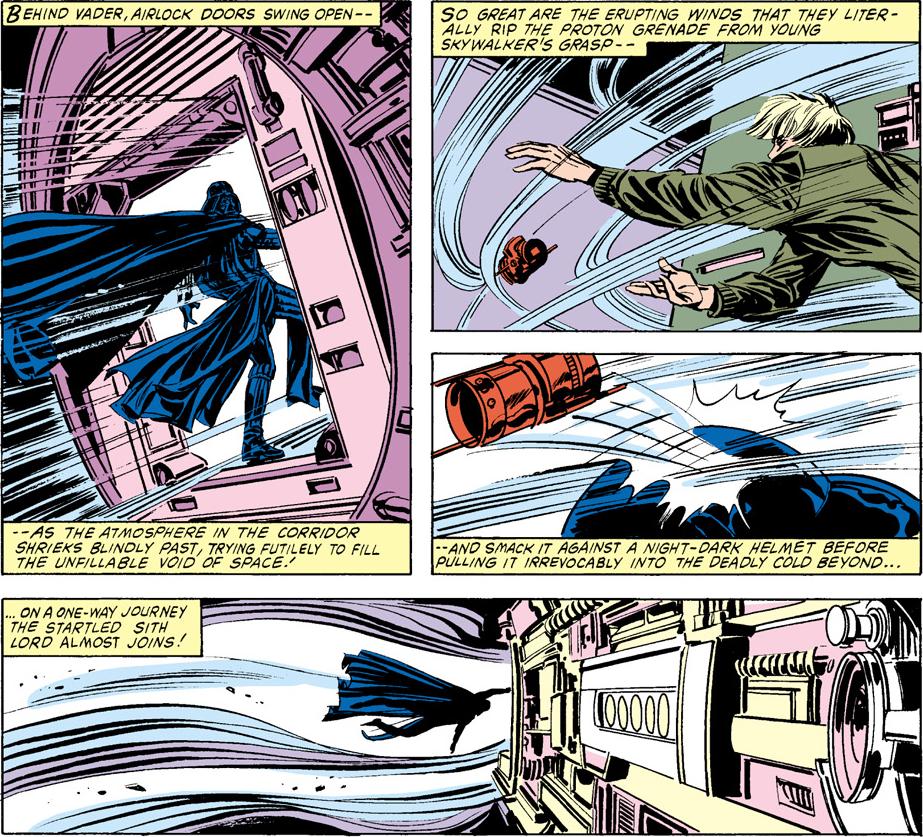 While this is technically about pre-production concepts for the first Star Wars (1977) film, an explanation is provided in this article on the official Star Wars website for one of the most well known images created by Star Wars conceptual artist/designer Ralph McQuarrie in February 1975; see picture below.

Basically, the initial concept for Darth Vader’s masked persona was based on the idea that Vader—in early drafts of the script—would be “…jumping from ship to ship through the vacuum of space.” Thus this is where the idea of Vader’s suit being able to withstand the vacuum of space came from to begin with.

And FWIW, it seems like this concept painting finally came to life in some way in 2016 considering…

…Darth Vader massacres Rebel troops in the airlock of a Rebel ship at the end of Rogue One (2016). While that airlock may—or may not—still be pressurized, the similarities between that scene in 2016 and Ralph McQuarrie’s illustration in 1975 are too strong to dismiss.

“Perhaps the most popular of Ralph’s paintings to appear in the portfolio, the laser duel, as he referred to it, was completed in February of 1975. While the portfolio, and nearly everyone who has discussed this painting in the past 35 years, describes it as ‘Luke versus Vader,’ at the time it was painted, the protagonist would have been Deak Starkiller from the second draft screenplay Ralph was working from.

It was because of this scene that Darth Vader came to have the look that he does. Ralph, concerned that Vader was jumping from ship to ship through the vacuum of space, felt that he would require some sort of breathing apparatus. George agreed, and the look of the masked villain was born.”

52
Why are stormtroopers stationed outside the Death Star near the turbolaser batteries adjacent to Bay 327?
11
Why was Darth Vader's cape fluttering at the end of Rogue One?
3
Did Vader reach out to the Force to reacquire his lost potential?