What prop was inserted into Rogue One because of George Lucas?

Rogue One director Gareth Edwards revealed in 2016 that, while on a tour of the props department, George Lucas expressed interest in a particular helmet that was then inserted into the film:

Edwards says that sitting in the department was "a helmet we loved but didn't know where to put it; there wasn't really an opportunity to use it". But when Lucas was given a tour of the design department, the father of Star Wars "walked past it and went 'That’s cool, I like that'".

Unsurprisingly that led to a renewed determination to put the aforementioned mysterious helmet in the film, as the offhand comment by Lucas spurred Edwards into action, and at the mention of the helmet they "looked at each other like, 'OK, we have to put that in the film!'".

However, Edwards didn't describe the helmet, leaving it unclear exactly which one it was.

Has anyone involved with the film revealed which helmet Lucas liked?

It was the hovertank pilot's helmet

Phil Szostak, an employee of Lucasfilm's art department (and author of The Art of Star Wars: The Force Awakens), revealed this on Twitter in early December, 2016: 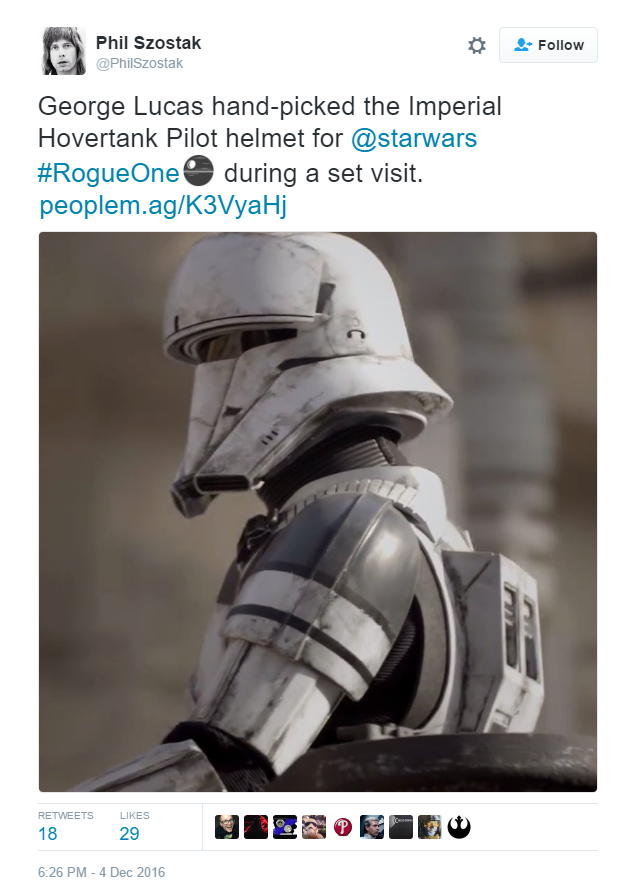 Not the answer you're looking for? Browse other questions tagged star-wars behind-the-scenes rogue-one or ask your own question.

55
Was George Lucas involved with Rogue One?