How is the Vision capable of love?

Vision is an android with the memories of Simon Williams (aka Wonder Man) infused with his own experiences as an android-about-town.

However, as proved by many journeys into his insides, he is still a robot. A robot that fell in love with Scarlet Witch and married her. But his love extends from Simon's memories! How is the Vision capable of experiencing love at all? Is it actual experience, or is he just accessing the memory of the actions that emotion entails?

Perhaps the question should be, how good does your programming have to be before you become capable of love?

The Vision's heuristic software allows him to learn, grow and evolve. While he was initially created to infiltrate the Avengers, it was assumed he would have to have sufficient ability to look and learn in order to interact effectively with the Avengers.

If you look at his history, he starts cold and unfeeling but slowly develops as a person, both in terms of his experiences and his willingness to sacrifice himself to save the other Avengers. Self-sacrifice is a sign of the power of choice indicating his Heuristic programming is not only replicating human behavior based on the engrams of Simon Williams, but evolving as a person to become a complete human being.

His ability to show emotion, is one that has taken time to develop from his experiences and a sign of his programming and his emotional database from the mental engrams of Simon Williams. The Vision has evolved to become a new and complete being with his own emotional spectrum.

In comics, it was shown that Vision was created by Ultron, based on the same neuro-network which gave him his sentience. The initial version of this A.I. network was made by Dr. Hank Pym, (aka Ant-Man) based on his own brain patterns. Pym created this A.I. to be able to "learn and evolve on its own"... however, when Hank did this, he was in a slightly mentally/emotionally unbalanced state [he was bi-polar]. This would account for Ultron's base instability, which was magnified to ridiculous levels. However, while the hardware of the neuro-network is essentially similar to Ultron's own, the brain pattern used for it came from another human: the hero and Avenger, Wonder Man. This made some sense, as the whole reason Ultron created Vision, actually, was to have an "off-spring" who could infiltrate the team and help him destroy the Avengers from within.

Now, while Ultron designed the Vision's body, it was a human, Professor Horton who did most of the "nuts and bolts" of programming Vision, essentially being forced by Ultron to do so. Ultron didn't want an android or robot, but a "synthetic human," so Vision is actually closer to being a techno-organic being than a pure robot. This may have some influence in how this new "Synthoid" actually has an ability to "feel" which is unlike what other robots can do; either way, Ultron thought he would be getting an obedient puppet. However, unbeknownst to him, while Professor Horton did use a similar neuro-network, he essentially hardwired the synthoid for independent thought, so that Vision would be able to make decisions for himself.

While I have little textual evidence for this supposition, as early as his first adventures with the Avengers--- when he was essentially meant to act as Ultron's sleeper agent---- Vision himself grew to admire and respect the heroes bravery and protection of life. Thus when Ultron's plans got underway, Vision broke from his control and chose to aid the heroes against his creator. This shows that Vision had a type of "free will" from his earliest incarnation, which means he was capable of decision making and sentient thought.

More important than that, however, is that after the battle, the Avengers asked him to join them, and Vision was so moved by their expression of trust and friendship, he actually cried. That, I was able to find a picture for: 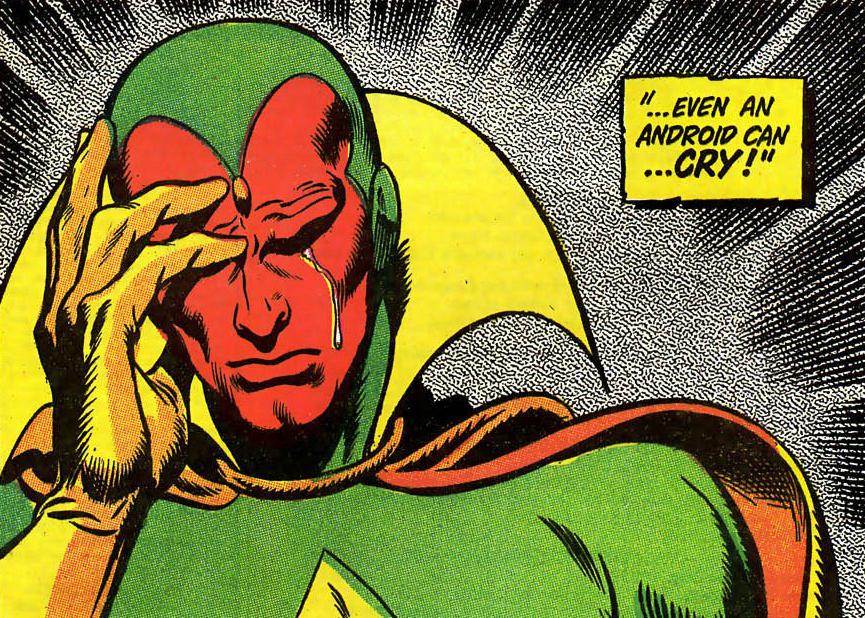 I always looked at Vision as being similar to Lt. Cmdr Data from Star Trek:TNG; both are highly advanced, created beings who were made specifically to be more than Human, but whom could learn, grow, have a sense of self and even develop emotion. The only difference is Data explicitly needed to have an "emotion chip" put in which could generate both sensation and equivalents to emotional responses or "feelings" in his positronic brain the way stimuli received in a human brain causes physical reactions throughout the body.

Several episodes have revolved around Data's "emotional growth" as a person, and explanations have been given for how this is continually accomplished. One such episode gave a pretty decent explanation for how Data, even without the equivalent of "emotions", forms connections to people. He was specifically speaking about his "missing" Lt. Tasha Yar, a former crew mate and special friend to him whom had died a few years prior. I was able to find a quote for it here: 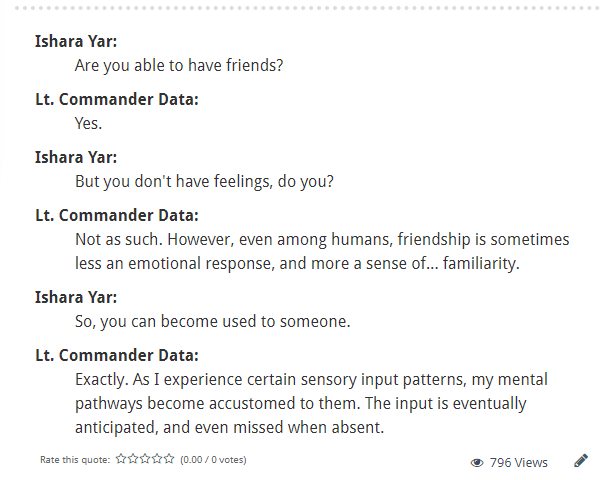 Now, this is just an educated guess on my part.... but I'm supposing that when Vision was given Simon/Wonder Man's brainwave patterns, he also inherited some of his base impulses [literally, as in the neural-electrical impulses that made his brain function]. These are similar to computer code, and would essentially be templates for basal human responses on a very visceral level, including rudimentary feelings like happiness, sadness, anger, disappointment, friendship, confusion, surprise...perhaps even love.

Combined with his advance A.I., which made him capable of "learning" or "intuiting" these emotions via experience, Vision would then have a capacity to... "naturally adapt to the stimuli" of a person, much like Commander Data would. However, because he Already has the base neural patterns of a human, which naturally processes or carries some element of emotion, he didn't need an emotion chip, and those "reactions" would just grow as his experiences do.

Now it should be noted that when Vision was destroyed, although all of his memories were intact, his emotions [or the adapted responses based on unique experiences] were no longer there. I liken this to a human getting amnesia, and no longer recognizing those things or people which previously were such important stimuli. Again, this is all just a theory, but similarly created beings seem to suffer the same fate any time they are destroyed and rebuilt; happened with the Red Tornado in DC, happened with Wally [at least until EVE "kissed him, essentially "Sparking" his memories after he was destroyed and "rebooted"] and it has happened in several other cyborg or robot based examples in media, from Braniac 13 all the way back to Robocop.

Actually Robocop is a decent analogy; Remember when Murphy (speaking about his family) said "I can feel them...but I can't remember them"? Yeah, same thing, but in reverse as he was previously human combined with machine, whereas the Vision is a machine based on humans.

So, to Nutshell: Vision's advance A.I. network and base neural patterns which came from a human gave him a "basis", for feeling rudimentary emotions, and his experiences with others allowed him to form attachments and have memories which deepened these into a type of "emotional feedback," allowing him to "feel" the significance of people and moments in his life. This could be his approximate expression of "love", on a mental and emotional, if not physical level.

8
Why was Scarlet Witch outcast from the Avengers
2
Were any of the Avengers involved the last time the Phoenix came to Earth?
6
Have there been clashes between the Avengers and the X-Men before?
5
What exactly was the relationship between The Vision and Wonder Man?
6
Was the Vision more powerful than Ultron?
18
Why did Ultron and The Vision disagree in Age of Ultron?
9
How is the Vision able to fly?
3
How does Vision control the distance of the beam from the mind stone?
4
What color is Vision in the MCU?