Were Palpatine or Vader ever congratulatory or nice to any of their subordinates?

In the movies, there is not a lot of gratitude thrown around, in fact, quite the opposite:

Why would I want to get promoted in the Empire if that just meant I would be force choked for any small indiscretion? Surely there was an upside to moving up that high in the ranks, right? Maybe bigger bonuses, discounts on woodo hide, or free vacations on Hoth?

I'd like to address a separate part of your query: "Why would I want to get promoted in the Empire if that just meant I would be force choked for any small indiscretion?"

Note that most parts of the Empire were not under the DIRECT control and supervision of the Emperor and Darth Vader, so "force choking" was likely not one of your many concerns.

However, Imperial Intelligence kept an eye on EVERYONE. And your fellow shipmates weren't likely to help you either. The Emperor intentionally encouraged backstabbing and such in his navy; the Tarkin Doctrine was just as effective in the Navy as it was to the universe at large: fear will keep the officers in line.

If you made a big enough mistake that the Emperor or Vader took notice, you basically did a bad job of throwing subordinates under the bus.

So why would anybody attempt to get promoted in this environment? It's safer at the top. Yes, you have a slightly higher chance of Lord Vader showing up and throwing you over a rail for failing to accomplish something, but in 99.9% of mistakes or errors, the higher up you are, the more subordinates you have to prop up your throne, and the fewer peers and superiors you have to worry about.

It's not the Empire, but when I was in a marching band, I asked the Seniors why I should listen to what they say and do all the hard work; they told me they had to do it when they were freshmen, so now it's their turn to give the orders.

COMMANDER: He was armed only with this.

VADER: Good work, Commander. Leave us. Conduct your search and bring his companions to me.

VADER: The Death Star will be completed on schedule.

EMPEROR: You have done well, Lord Vader. And now I sense you wish to continue your search for young Skywalker.

ANAKIN: The traitors have been taken care of, Lord Sidious.

DARTH SlDIOUS: Good . . . good . . . You have done well, my new apprentice. Do you feel your power growing?

DARTH VADER: The Separatists are taken care of, My Master.

DARTH SlDIOUS: It is finished, then. You have restored peace and justice to the galaxy. You have done well, Lord Vader.

“Yes, Master.” He risked a glance out the viewport. Most of the council had reached the starship. Gunray should be joining them any second; Grievous had seen firsthand how fast the viceroy could run, given proper motivation. “The ship will lift off within moments.”

“Well done, my general. Now you must turn your hand to preparing our trap there on Utapau. The Jedi hunt you personally at last; you must be ready for their attack.”

Revenge of the Sith: Official Novelisation

“I bring you good news, my Lord,” Dooku said. Though he knew that everyone on Coruscant must already have heard, his instructions had been to return here with the news — and Darth Sidious had a short and unpleasant way with anyone who disobeyed even the smallest part of his orders. “The war has begun.”

“Excellent.” Sidious’s dry voice sounded almost enthusiastic, and his lips — the only part of him visible beneath the deep hood — curved in a slight smile. “Everything is going as planned.”

“Queen Amidala is young and naive,” Sidious said dismissively. “Controlling her will not be difficult. You have done well, Viceroy.”

Nute sighed in relief as the hologram faded away. Dealing with Darth Sidious was almost as nerve-racking as that business with the Jedi had been.

DARTH SIDIOUS : Move against the Jedi first…you will then have no difficulty taking the Queen back to Naboo, where she will sign the treaty.

DARTH SIDIOUS : You have been well trained, my young apprentice, they will be no match for you. It is too late for them to stop us now. Everything is going as planned. The Republic will soon be in my command.

“Sergeant Crest,” Vader said toward the device. “Are you in the crime lord’s warehouse?”

“Yes, Lord Vader. Ready to bring the entire place down on your command.”

“Then you have redeemed yourself, Sergeant.”

I want to add one extraordinary case from the Expanded Universe: Lieutenant Erv Lekauf. In a short story A Two-Edged Sword, Lord Vader paid unheard compliments and even showed compassion for him. He valued the Lieutenant's exceptional loyalty, intelligence, and honesty.

"I apologize for our performance, sir," said Lekauf.

Vader noted the use of the word our. "I won't consider that failure in hand-to-hand combat until I see you fight ordinary men."

"That's very generous of you, sir."

Even the Emperor himself was (at least apparently) positive towards Lekauf.

"Lieutenant," said Palpatine, looking past Vader to where Lekauf stood in patient silence. "What makes you loyal to Lord Vader?"

Lekauf, normally uncomfortable around Palpatine, relaxed a little. Vader could feel it. Lekauf's doubts and passions seldom showed on his face, but he had them, and Vader could always taste them and sometimes relied on them to understand what was happening within the Imperial Army.

"With your permission, sir," said Lekauf, and looked to Vader. "It's because my Lord never asks his men to do anything that he wouldn't do himself."

In the end of the story Lekauf suffers severe injuries and is taken care of by Vader.

He leaned over Lekauf and stared into his face, seeing a fraction of the image that Palpatine must once have seen of him. "You are too loyal for your own good, Lieutenant."

"You never disappoint me," said Vader. 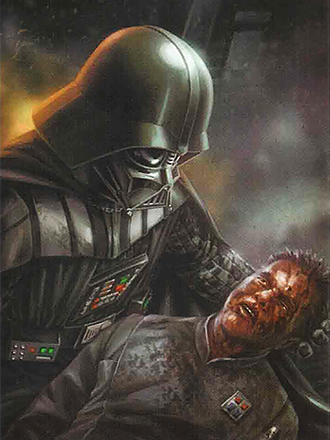 Not the answer you're looking for? Browse other questions tagged star-wars darth-vader darth-sidious or ask your own question.