What is this picture in Thrawn's study of?

In Star Wars Rebels season 3, episode 10 : An Inside Man we see that Thrawn has collected a series of images, mostly of the crew of the ghost and their past (some I recognise from previous episodes).

However, there is one image I don't recognise anything about and was wondering what is known about it; it depicts a fairly interesting looking scene. At a guess it appears to be a Sith attacking Jedi and supporters. Has this picture (or something similar) appeared earlier in the series or has anyone said anything about it outside the show that might clarify this?

I've added a screencap to help: 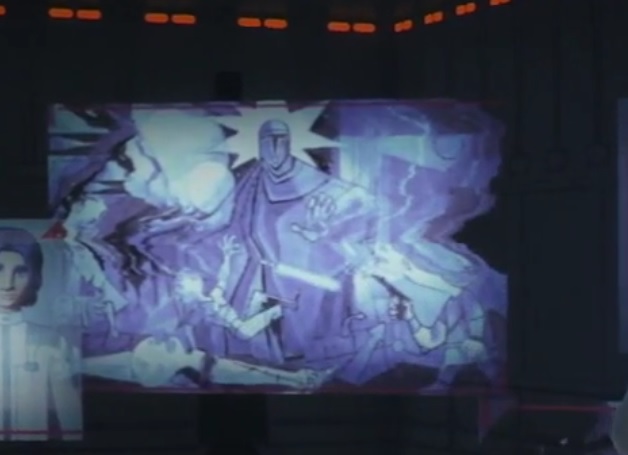 This mural, and others like it, previously appeared in episodes of Star Wars: The Clone Wars as background decorations on Mandalorian worlds:

From that context alone, it's clear that they depict some ancient conflict between the Jedi and the Mandalorians.

The full history behind this conflict is not clear, but Obi-Wan confirms that such conflicts did happen in the distant past:

Obi-Wan: I know these commandos fought in many wars, often against The Jedi.

The central figure in the mural in the question closely resembles the Mandalore from Legends continuity, the political and military head of the Mandalorian clans, especially Mandalore the Ultimate (on the left) and Mandalore the Indomitable (on the right): 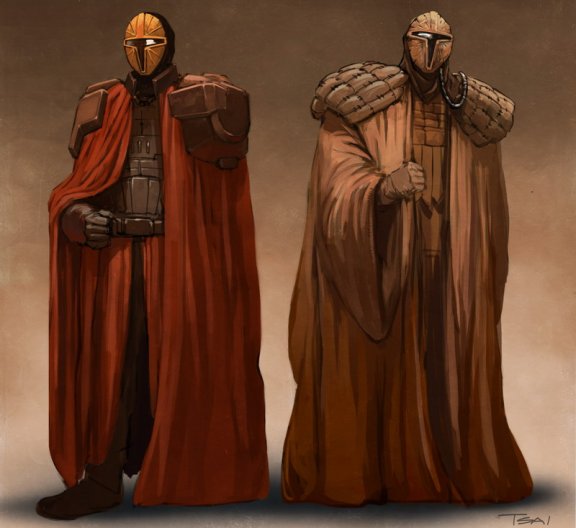 But the relationship has yet to be confirmed in canon.

Correct me if I'm wrong, but I believe the image has appeared before in an episode of "The Clone Wars" as well. The episode in question is "The Mandalore Plot" in season 2. For plot details, you can look here on Wookieepedia. The painting appears alongside others on one of the moons of Mandalore in the house of Pre Vizsla. It seems to be based off of the style of Picasso, and is meant to portray a mandalorian warrior killing a bunch of Jedi Knights, an impressive feat. Since all of the art in he's looking at is supposed to connect to the rebels crew, I would suspect that it is a nod to Sabine's heritage, being mandalorian and all.

15
Is the Mandalorian War canonical again?

17
Is it ever explained what dangers Thrawn's people were guarding against?
8
What is this symbol on the Ghost
14
What is the symbol on the pauldron of the storm troopers who guard Grand Admiral Thrawn's office?
9
How was Ezra aware of this fact?
6
Why did this character abstain from fighting?
7
Is the storyteller kid at the end of "The Last Jedi" Force-sensitive?
49
Is there an in-universe explanation given to the senior Imperial Navy Officers as to why Darth Vader serves Emperor Palpatine?
13
How did Ahsoka know the specifics of Anakin's fall?
15
What does the -Odo suffix in Thrawn's name mean?