Anyway the plot is about a group of people finding an alien ship or machine that contains these doorways into alternate or parallel worlds. If I recall correctly I think there were a couple of these ships/machines found and one was in South America although that was later in the story. The aliens are nowhere to be found so the people start exploring the ships and find the doorways. After going thru one of the doors they find that they can't get back to their original timeline or world and they keep trying to find out how to get back.

Also they find artefacts and machines left by the missing aliens who created these ships/machines and try to find out about them. One part that I remember - after the world at large has found out about the ships/machines - one way they use the doorways are as prisons, by sending criminals and supplies for them through the doors, and letting them sort things out among themselves.

I know this is really vague.

This sounds like a book I bought in a used-book shop somewhere around the year 2000. It was Stranger Suns by George Zebrowski. 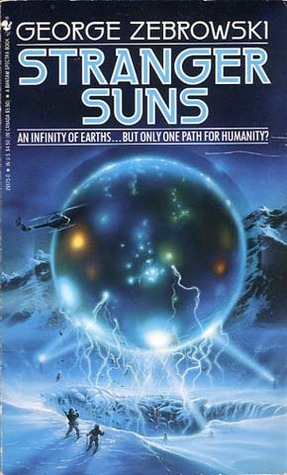 At first, human scientists are exploring an old alien starship which apparently has been buried beneath the ice in Antarctica for a long time . . . until modern science unexpectedly found a way to detect its emissions. The starship is in the form of a sphere, over a mile in diameter, with lots of little passages and rooms inside, making it a three-dimensional maze if you don't already have a floor map. (Which, of course, the humans don't when they start exploring it.)

Later on, the main characters discover another one which is buried in the dirt somewhere in the Amazon rainforest of South America. (That would be the one you mentioned in your post.)

As explorations and analysis continue, it gradually becomes clear that the aliens, ages ago, had first learned how to build ships that could travel from one solar system to another very fast, and later had learned how to link things together so that you could step from one place to another without needing to fly a ship through the intervening space each time (similar to the "Stargate" concept in the TV shows), and then somewhere along the line the aliens had also learned how to move "sideways in time" from one parallel world to another, while staying in the same geographic location! Hence the opportunity to explore many parallel Earths. The aliens appear to be long gone, but their technology still works extremely well, once humans get the hang of it.

You also mentioned the idea that these doorways could be, and were, used to exile unwanted criminals. Frankly, I'd forgotten about that angle, but I found references to it just now when I looked. For instance, here's an excerpt from Chapter 32.

A growing city of white domes clustered around the ship, housing the researchers who worked within the alien vessel, and providing holding areas for the convicts who were being brought in for their one-way trip away from Earth. A hundred at a time were instructed and equipped, then taken down the corkscrew passage of the starship to the frame chamber and herded through to a distant world, where other rejects were already attempting to make a life for themselves.

The attraction of the scheme was that criminals could be removed from highly visible penal institutions which did not rehabilitate and were a costly problem to their communities; even better, no criminals need ever be executed. Simply remove them forever from their past and future victims. Make your lives elsewhere, the judges were saying, and you'll feel the need for law.

14
What novel has people exploring a spaceship with cubbies that duplicated anything, including a hand?

15
Book about aliens who attack Earth and destroy the Sun
13
Looking for a Science Fiction Omnibus
4
Looking for Space Exploration Book which is collection of different sub-stories
13
Book about mankind entering the space age and their first contact with two civilizations in sol
11
Looking for name of sci-fi book and author: “father” of robots from 60s or 70s
6
Looking for name/author of a book series with a lottery
15
Science Fiction book identification Series with smart-ass AI
7
Old science fiction book about telepathy, telekinesis, pyrokinesis and mental control of insects