Why didn't Spider-Man wear armour all the time?

Spider-Man has an new suit of armour that he's had ready for a long time, and he finally gets to show it off in The Amazing Spider-Man #683. Sometime before or after those events he's in AvX #1. Regardless of how those events are chronologically linked, I've gotten the impression he's worn armour before. Why not wear it all the time?

Spider-Man has, for the bulk of his career, avoided using armor for a couple of reasons, primarily, with his powers being based in mobility and agility, coupled with a short-term precognition, it made more sense to be "light and fast" dodging damage than trying to "tank the damage" using armor.

Once Spider-Man started hanging out with the Avengers, it was decided he might need to augment his natural abilities with armors designed by Stark which gave him a wider array of options in his superhero arsenal (and to offset the loss of his spider-senses).

His latest armor incorporates the designs of the three armored suits including the Iron Spider rig, the stealth suit and the unstable molecule design incorporated into a single suit. This suit also has been upgraded to enhance his considerable physical abilities increasing his strength, speed and agility. His spider-sense had been lost and whether it will return is still unknown.

Spider-Man will be getting a new suit of armor starting in The Amazing Spider-Man #682. How this suit will work in relationship to his powers, and who the manufacturer is, has yet to be revealed. 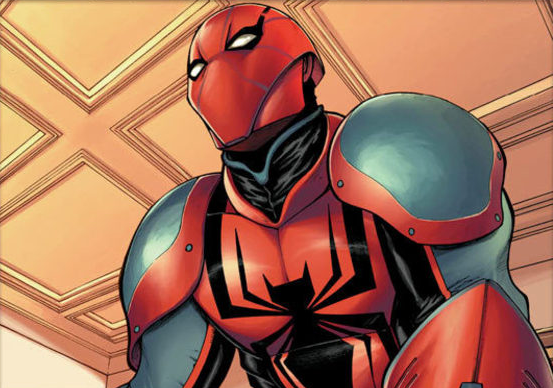 Funny you should ask,because in the all-new all-different amazing spiderman comic book line he upgrades his suit to be a liquid metal suit with different types of technology.

The Spider Armour mark 2 didn't slow him down, nor did the Ends of the Earth or the Iron Spider. In fact, none of his armours slow him down, except for one that did in the 90's when he made this bulky silver spider armour mark 1. Since then he has improved and made the Spider Armour mark 2. That is the one with the yellow spider and black round. It is extremely light weight, compact, tight, and flexible. The reason why he dosen't use those sometimes because his skin tight costume can fit under his cloths and he didn't need it with the threats he was facing. Spiderman didn't need those costumes they just helped.

Not the answer you're looking for? Browse other questions tagged comics marvel avengers spider-man avengers-vs-x-men or ask your own question.

11
Does Spider-Man shoot spider silk?
8
Which Spider-Man is he?
16
What are the differences between Spider-man and Ultimate Spider-man?
8
Why didn't Spider-Man gain natural spinnerets with his initial powers?
30
Why does J.Jonah Jameson hate Spider-Man?
9
The rich playboy is dead, and he's a ghost, but his wife still loves him
10
Spider-Man and Fantastic 4 crossover comic with Double Identity Scene
23
Has Peter Parker ever received any awards for his photography?