In most Star Wars battles, the ships shoot lasers at each other.

In Rogue One and RotJ, however, ships physically colliding with other ships won battles. In Rogue One, a capital ship collided with the planetary shield, deactivating it.

When an opponent comes at you with a space fleet, why doesn't a space admiral take an unarmed, unmanned hunk of metal and hyperspace it right through the enemy? Why do they just mess about with little lasers?

This is addressed, or rather handwaved, in Rise of Skywalker. The Holdo Maneuver is said to be a one-in-a-million long-shot. It was only possible because the Rebels had days to plan it out (and presumably perform the required hyperspace calculations) and because their enemy was stupid enough to put itself in a big long line directly behind the ship they were chasing.

Beaumont leaned forward. “We need to do some Holdo maneuvers,” he said. “Do some real damage.”

Before Poe could answer that they couldn’t afford to sacrifice anyone, Finn jumped in with “C’mon that move was one in a million. Fighters and freighters can take out their cannons if there are enough of us.”

Note that this is then subverted (a second time) at the end of Rise of Skywalker as we see a Star Destroyer cut in half in the sky above the Forest Moon of Endor, apparently the result of a freighter doing "a Holdo Maneuver" on them.

Holdo Maneuver: Above the Forest Moon of Endor a Resurgent-class Star Destroyer was split in two by a heavy freighter entering hyperspace on a collision course. 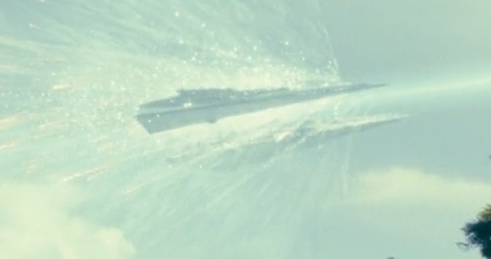 Not the answer you're looking for? Browse other questions tagged star-wars hyperspace or ask your own question.

25
Could Vader really have crushed the Rebels on Hoth?
2
Hyperspace in Star Wars
44
Why didn't the Rebels jump to hyperspace to escape at the Battle of Endor?
4
Conventional tactics and munitions in Star Wars
1
Is it known if there are non-Interdictor tactics to stop ships in hyperspace?
28
Why did Admiral Piett allow the Shuttle Tydirium to pass?
2
Is a Hammerhead Corvette the only ship type capable of safely ramming other ships?
3
Hyperspace and Interdictors