How did the Avalon (seemingly) get to Arcturus so quickly if they're only traveling at .5 of lightspeed?

Assume spoilers about Passengers from here, but really this has nothing to do with the plot so...

There are a number of tiny points to criticize in the film, but what I'm really coming up empty on is the math concerning where they are and how.

I think we know these things:

So did they travel around ~37 lightyears in thirty years? Did I miss something?

In the 'Passengers' universe Arcturus is only (approximately) 20 light years from Earth.

Jim: Wait. How long ago did we leave Earth?

and we can be certain of the ship's location because when Jim uses the (laser-based) Comms Terminal to contact Earth, it tells us

and we know that the ship is traveling at approx .5 of lightspeed because the ship's Flight Engineer tells us

That being said, it's possible that the ship accelerated dramatically (see below) after they fixed the onboard computers. This would have have allowed them to reach the real Arcturus in a shorter period.

The ship must have been traveling at a higher speed before Jim woke up.

We know that the ship must have been traveling at a speed greater than 75% of light speed for the first leg of its journey (in order to have traveled 19 light years in just 30 years) and that the Avalon is presumably slowing down, possibly due to the magnetic ramscoop encountering space dust to feed the engines or possibly as a result of the accident that woke Jim. This would also explain the need for a mid-course slingshot to increase their speed.

Obviously none of the above tallies with what the film's writer, Jon Spaihts said about the accuracy of the physics of the film.

Q: There was one reference to a star that the spaceship was making a slingshot maneuver around – Arcturus, I think? Filmgoers might be thinking to themselves, ‘Now, how far away is that?’

A: “It’s about the right distance away. [36.7 light-years from Earth.] I think the dodgiest thing about the slingshot maneuver is, I don’t know how much velocity you can steal from a body you’re passing that does not have substantial proper motion with respect to a transit perpendicular to your direction of travel.

“If it’s pretty stationary with respect to you, I don’t think you can steal a lot of velocity from it, especially if you’re traveling 0.5 c before you get there. So it’s more of a showy move. It might be a way of changing your trajectory.”

At the very least this implies that the ship's speed is highly inconsistent but more likely it's just a straight up goof by the writer.

He did admit to having taken some liberties with our "local neighbourhood". Perhaps this is one of those changes.

"I did investigate our general galactic neighborhood. Traveling at a fraction of the speed of light for 120 years can't actually get [a ship] very far; there's really just a basket of stars that they could be going to," Spaights said. "I had a general notion of where they might have found the habitable planet, and maybe stretched a little bit how far they might have gone [to get there]."

Real Science Inspires Voyage to the Stars in 'Passengers'

You might wish to note that in the original script the star was simply described as "a Red Giant", rather than being named as Arcturus.

A STAR looms ahead of the ship: a RED GIANT. The Excelsior rockets toward the star. The passage takes less than a minute. The Red Giant swells in the windows. The ship shudders. The engines howl. Aurora falls into Jim’s arms. The ship bathed in red light.

and the ship's position was far more explicitly confirmed.

The combination of velocity, travel time and travel distance is impossible. 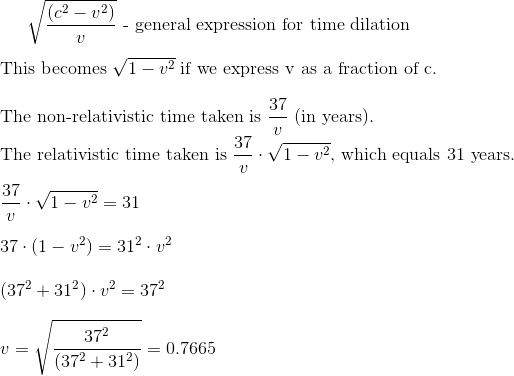 NOTE: I have assumed that the travel velocity is maintained throughout the trip, and reached after a negligible amount of time after departure. If this is not the case then the average/maximum velocity should be higher.

I think you are missing time dilation. At 0.5c, time is moving 15% slower on the ship. https://en.wikibooks.org/wiki/A_Roller_Coaster_Ride_through_Relativity/Time_Dilation

So it is possible to cover larger distances in less time (our view). Or distance is compressed from people on the ship's point of view.

However the number don't line up so well. 32 years (ship time) would be better for 37 light years.... but that does not factor in time to accelerate to 0.5c. Which does not seem plausible with the ship design.

I believe that another thing should be taken into account: in my opinion the ship is not flying at constant 0,5c velocity. During the movie we see that the ship's engine is constantly in operation, therefore I believe that we should assume the speed of 0,0c at the beginning of the journey (relative to Earth, I believe that we can forget about orbital velocity oraund Earth, is it would be negligible) and the velocity of 0,5c after 30 years (probably ship's time). The relativistic factor calculation would then become much more difficult as it would change constantly (I am unable to make them, but I am certain that someone here could).

I believe that it should be assumed that the ship would accelerate until reaching speed closer to 1c, then turn around and apply break until reaching the orbit of Homestead II. As to the exact figures, I do not know enough math to answer. Corrcect me if I am wrong.

Not the answer you're looking for? Browse other questions tagged spaceship space physics passengers or ask your own question.

4
How had the Avalon traveled 19 light years in just 30 years if it was moving at half the speed of light?
25
How was Jim able to space walk when the ship was traveling at .5 c?
11
How fast was the Avalon moving?
8
Why does Jim think he'll die before reaching Homestead II?

11
Why did flagship starships all get the name Enterprise?
25
How was Jim able to space walk when the ship was traveling at .5 c?
11
How fast was the Avalon moving?