Were the Borg Always intended to be a Delta Quadrant power?

While there is no indication of where the Enterprise is in the Galaxy at the beginning of Q-Who, it can be somewhat safely assumed that the episode starts relatively close to Federation Space (as opposed to somewhere in the Delta or Gamma Quadrants). The Federation and it's allies and enemies straddle the Alpha/Beta Quadrant border.

That said, in Q-Who, Q "throws" the Enterprise approximately 7,000 light years where they encounter a Borg cube. Seemingly, this puts them further out in the Beta or Alpha Quadrant. Essentially, my logic is, if the galaxy is 100,000 ly across, and the Enterprise is somewhere between 5 and 7 on a clock face, a 7,000ly jump would move them to 4 or 8 not 1 or 2 (Delta Quadrant).

In Descent, the Enterprise chases Lore's ship through a transwarp conduit to a planet 65 ly from Federation Space. No where near the Delta Quadrant.

Furthermore, the Ferengi have a VERY low species identification number which indicates that either the Borg were active in the Alpha/Beta Quadrant a long time ago or the Ferengi were in the Delta Quadrant at the time.

It seems like it wasn't until Voyager that it was established that the Borg were a Delta Quadrant species.

So were the Borg always supposed to be from the other side of the Galaxy or just farther out than the Federation had explored?

The Star Trek: The Next Generation Technical Journal (not the Manual) from 1992 contains a rough map of the galaxy, indicating Borg space in the Delta Quadrant. That's about the time of the Descent two-parter, and a year or two before Voyager aired. There may be earlier references, but I'm not aware of them. 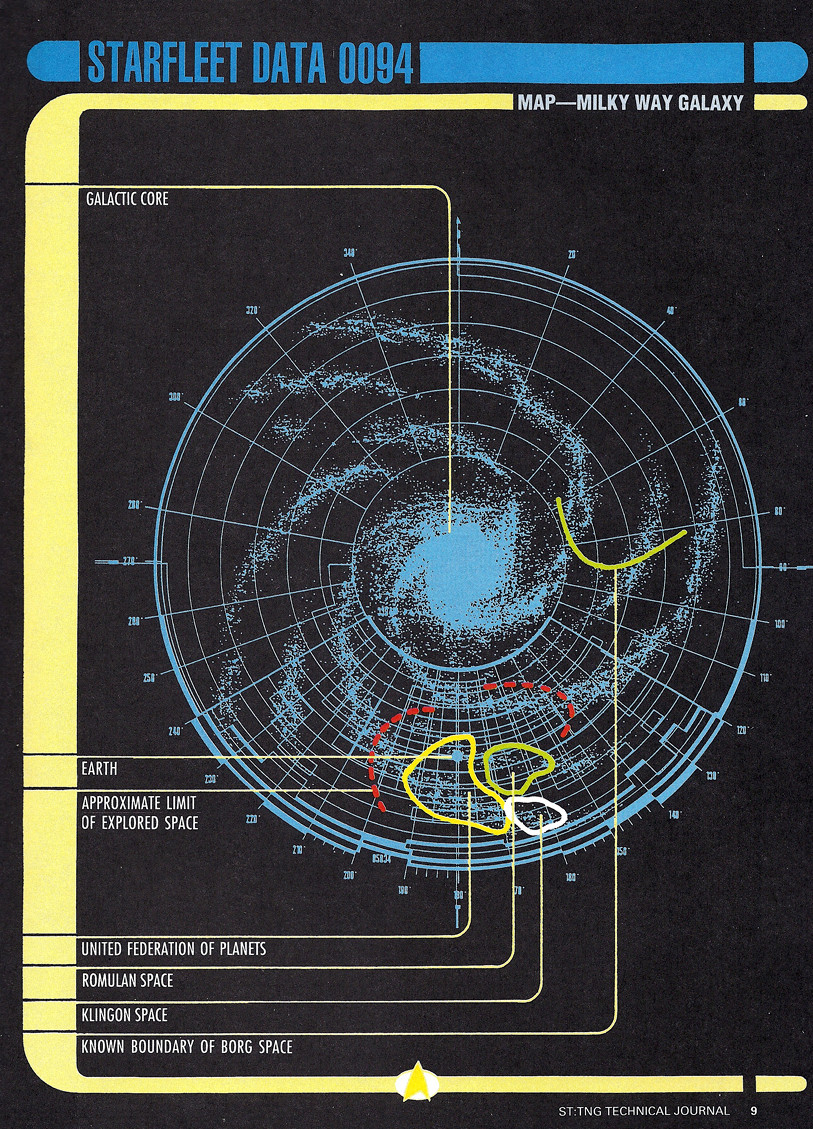 In "Parallels" a Captain Riker on an Enterprise D from an alternate universes says:

RIKER [on viewscreen]: We won't go back. You don't know what it's like in our universe. The Federation's gone, the Borg is everywhere! We're one of the last ships left. Please, you've got to help us!

It's not so bad in the main alternate universe, but to a lesser degree THE BORG ARE EVERYWHERE!!

Right, left, forward, back, up, down, the Borg are in every direction.

DATA: Captain, there is nothing left of Outpost Delta Zero Five. LAFORGE: Must have been one hell of an explosion. DATA: Sensors indicate no evidence of conventional attack. PICARD: Can you determine what happened? WORF: The outpost was not just destroyed, it's as though some great force just scooped it off the face of the planet.

In "Q who?" Q sends the Enterprise over 7,000 light yeas through space in an unspecified direction.

DATA: According to these coordinates, we have travelled seven thousand light years

Exploring a planet in system J two five they find:

WORF: Captain, the sixth planet in the system is Class M. DATA: There is a system of roads on this planet, which indicates a highly industrialised civilisation. But where there should be cities there are only great rips in the surface. WORF: It is as though some great force just scooped all the machine elements off the face of the planet. DATA: It is identical to what happened to the outposts along the Neutral Zone.

Then the Borg attack and they eventually have to ask Q to save them and send them back to where they were.

In "The Best of Both Worlds":

Captain's log, Stardate 43989.1. The Enterprise has arrived at Jouret Four in response to a distress signal from one of the Federation's outermost colonies.
[Transporter room]

RIKER: Anything from the surface?
WORF: No sir. There have been no communications from the colony for over twelve hours.
RIKER: Sensors picking up any signs of life?
WORF: None.
O'BRIEN: The surface environment is safe for transport, Commander.

Captain's log, Stardate 43992.6. Admiral Hanson and Lieutenant Commander Shelby of Starfleet Tactical have arrived to review the disappearance of New Providence colony. No sign remains of the nine hundred inhabitants.

HANSON: The truth is, hell, we are not ready. We've known they were coming for over a year. We've thrown every resource we have into this, but still
RIKER: Then you're convinced it is the Borg?
SHELBY: (blonde woman) That's what I'm here to find out. The initial descriptions of these surface conditions are almost identical to your reports from system J two five.
PICARD: Commander Riker wrote those reports. He agrees with you.

HANSON: We expected much more lead time. Your encounter with the Borg was over seven thousand light years away. PICARD: If this is the Borg, it would indicate they have a source of power far superior to our own.

SHELBY: The soil contains the same magnetic resonance traces That's our footprint. There's no doubt any more. It is the Borg.

There are Borg at system J25 7,000 light years from Federation space, Borg at the Federation-Romulan Neutral Zone thousands of light years closer to earth, and now Borg in another section of Federation space. These three sets of Borg may belong to one, two, or three different Borg planetary colonies, ships, or fleets.

HANSON [on monitor]: We're coming with every available starship to assist, Captain, but the closest help is six days away.

So the nearest reinforcements are six days away, and no doubt Earth is even farther.

A Borg ship in the area near New Providence attacks the Enterprise, kidnaps Captain Picard, and leaves at warp speed:

WORF: Sir, the coordinates they have set, they're on a direct course to sector zero zero one. The Terran system. RIKER: Earth.

All during "The Best of Both Worlds Part 2" The Enterprise follows the Borg ship to Earth, and despite being delayed for eight to twelve hours to repair, eventually catch up with it. The Borg ship must travel no faster than The Enterprise and so should not have come from the area near system J25 7,000 light years from Earth but from a closer group of Borg.

As fans remember a Federation fleet fights the Borg ship heading straight for Earth at the star system Wolf 359. Wolf 359 is one of the closest stars to earth, being 7.86 light years from Earth.

306.5684 degrees is pointed 53.4316 degrees from the galactic center. Earth is about 25,000 light years from the center of the galaxy and thus from the line separated the Alpha and Beta quadrants from the Gamma and Delta Quadrants.

If the Borg ship had come straight from the main body of Borg space in the galactic disc about 50,000 light years from Earth, it's trip toward Earth would be angled at a much "lower" galactic latitude.

The Borg already have colonies and fleets and single cubes at least 50,000 light years from the center of Borg space and the usual frontiers of Borg Space, and at least one such group is fairly close to Federation space.

Fortunately most of the Borg groups far from the center of Borg space are very widely and thinly scattered, and don't need to do a lot of assimilating. They spend much time studying each interstellar society or species they encounter, calculating the best time to assimilate it and waiting for decades, centuries, or millennia until they are ready to be harvested by the Borg. But every victim group will have their proper time.

So sooner or later everyone in Federation Space will have reason to sing:

The Borg are back and they're gonna assimilate everybody,
Oh no! oh no! The Borg are Back!

THE BORG ARE EVERYWHERE!!

I have seen the episode you refer to and believe the Borg were always meant to be the encroaching bogey man of Star Trek, a massively superior race who are essentially unstoppable, hence why were were given the preview of them early on in the next generation, to get us anticipating and hooked etc.

I do believe they were intended to be some were that was beyond Starfleets reach via the current warp capabilities, so putting them in the Delta quadrant makes sense. voyager was a convenient time (possibly intended purpose of the show even?) to explore them beyond what we already knew, I mean with Seven of Nine, just gave much more scope for opening up their story line.

MojojojoMojojojo
7
Add a comment  |
Highly active question. Earn 10 reputation (not counting the association bonus) in order to answer this question. The reputation requirement helps protect this question from spam and non-answer activity.