Why did Anakin keep his eye scar when Luke got completely healed of much deeper scars from the Wampa?

Now, I know that the Wampa scene was apparently introduced to account for Hamill's changed nose from his recent car accident but it does seem possible that after the Bacta tank treatment and some other Medical Droid attention, he was completely healed of them, then why isn't this the case with Anakin? Did he just think that the scar looked cool and leave it there? 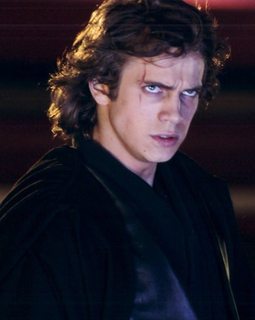 Edit: Apparently the wampa scene was written even before the accident, so it really is possible to heal very deep scars in the galaxy far, far away, which makes me wonder why Anakin (and then Vader) still had theirs.

The film's official novelisation indicates that he may have intentionally kept it in order to provide himself with a constant reminder not to become complacent.

She reached up to the burn-scar high on his cheek. “You were hurt...”

“Nothing serious,” he said with half a smile. “Just an unfriendly reminder to keep up with my lightsaber practice.”

34
Why is Luke's cybernetic hand superior to the one Anakin receives?
32
What is the origin of Darth Vader's face scar?
34
Was Star Wars changed because of a car crash?
30
Why are Anakin and Luke fitted with cybernetic hands?

76
If Obi-Wan and Yoda were trying to keep Luke safe from Vader, why would they let him keep the Skywalker name?
24
Why did Palpatine order Anakin to kill Count Dooku when Anakin was not yet turned to the Dark Side?
25
Why "hide" Luke from his father somewhere Anakin knows?
23
Why did the wampa put Luke Skywalker upside down in the ice cave on Hoth?
8
Why did Luke leave his landspeeder when Sandpeople were coming?
6
Why did Darth Vader fall down so much when fighting Luke?
34
Was Star Wars changed because of a car crash?
31
Why did Ponda Baba and Doctor Evazan in the cantina dislike Luke so much?