Is “Wobani” an intentional anagram of “Obi-wan”?

I've seen in a couple of places, most notable here that

The name of the prison planet that Jyn is rescued on is called Wobani, which is an anagram for the name Obi-Wan.

-Slashfilm.com - 46 Rogue One Easter Eggs: How Many of These Did You Catch? Posted on Thursday, December 22nd, 2016 by Peter Sciretta

Is this an intentional anagram?

Is there canonical confirmation that this was intended, or just a simple coincidence?

I recently asked Pablo hidalgo (twice) on twitter about this, and got a response:

This is only a sort-of confirmation, as it doesn't say whether it was intentional or not, just that Pablo found out the connection after the fact. He also doesn't really seem to think it is a strong connection, given that the name "Wobani" sounds more like a greek yoghurt brand, Chobani 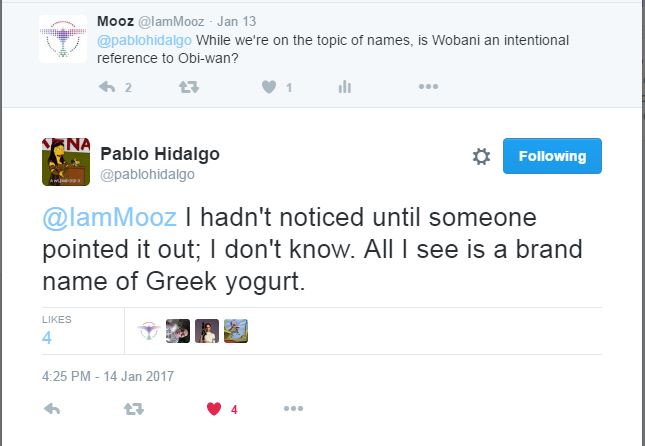 Not the answer you're looking for? Browse other questions tagged star-wars rogue-one easter-egg or ask your own question.

15
Why is Obi-Wan written “OB1”?
48
Did Obi-wan Age Normally?
19
Why would Obi-Wan Kenobi say this?
31
Why didn't the Alliance send for Yoda instead of Obi-Wan?