Rick & Morty: What's the difference between 'dimension', 'timeline', and 'reality'?

The show is riddled with reference terminology and adventures hopping in and out of alternate realities, timelines, and dimensions.

Question: Is there a difference between the terms 'dimension', 'timeline', and 'reality' with respect to the show?

Question 2: Does Rick's portal gun transport him to different places in the same timeline (for example, different locations in the current universe), or does it just take him to different dimensions/realities where different earths exist?

There isn't exactly a definitive answer to this question, as Rick seems to refer to dimensions and timelines interchangeably. From S01E08:

Now who wants to watch random, crazy TV shows from different dimensions a-a-and then who wants to narcissistically obsess about their alternate self?

But in S02E01 the split timelines seem to be a distinct thing created as a result of the time freeze (which can't be traveled between with the Portal gun).

There is a difference between alternate universes and parallel universes, but they are closely linked.

When Rick refers to

this summarizes a theory based on quantum physics wherein whenever a decision is made, the universe is split into two where each different decision is made in either universe (it's much more complicated than that, but that's the gist). 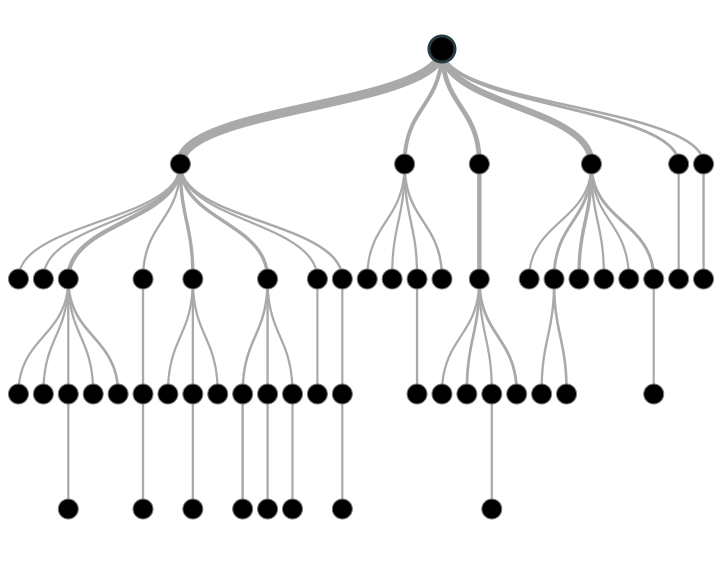 This image demonstrates how the different decision will split into alternate dimensions, each has their own timeline where different events have happened in their own past, and thus each has a different reality where they will understand the sequence of events that has happened differently.

So whilst all of the words being used interchangeably refer to pretty much the same thing, timeline refers to the sequence of events that has created that specific universe, and dimension is the universe in which that reality exists.

Note that the words can be used interchangeably because time travels in one direction, and each alternate universe appears to have the same amount of time that has passed (Rick and Morty are always the same age, Tiny Rick notwithstanding).

This happens in S02E01 when Rick uses the time crystal to stop time. It is the same idea as alternate realities, but because Rick, Morty and Summer are out of sync with the rest of the universe's time it causes their own reality to rupture and split off from the rest.

When one of them is indecisive about something, usually two equal and different universes would be created, but because their own personal timeline is so much further forward than the one they are living in they get their own little universe that is massively unstable because it is trying to exist on its own.

As for the portal gun, it can travel both to alternate dimensions and different places in the same universe.

Realities, Universes, Timelines, and Dimensions always have Alternates and Parallels. Think of this analogy as a Story that is changeable in any way like a Book.

Realities are the Stories of how you live your life within a Book.

Timelines are the Stories you might have if you changed some decisions in a remake of the Book.

Universes are the Shelves of every Book you've written that has the same Story, where some have different endings but the ones beside the Book are the Continuation, while the Shelf above or below it have small to big changes.

Dimensions are the Bookshelves themselves, where each Bookshelf holds different Stories; the Books near the original have a bit of similarity, but the farther Bookshelf is from the original, the more different the Story is.

2
Do Universe and Dimension mean the same thing?