Which of the items and monsters were references?

In The Cabin in the Woods, I recognized a few items as references to famous horror movies. Additionally, later when

Dana and Marty head down the elevator to the monster storage area,

there are a few monsters that are obviously references.

Which of the items and monsters are references to other films, and what films do they reference?

From the IMDB FAQ and edited based on the image below. Massive spoilers ahead!

The whole elevator scene itself is a reference to The Cube in that they are in one box that moves around amongst thousands of others.

Also, where they are looking at the props in the basement a wedding dress is seen which looks like Gina Davis' dress from Beetlejuice. Moments later, Chris Hemsworth blows a horn which looks like Alec Baldwins' transformed state in the same film.

The scene in which it shows the other failures from around the world displays a castle on fire in Madrid. Did anyone feel this was a nod to Resident Evil 4 where you infiltrate the castle and you have to take out the catapults?

Also, a fat and old version of Kratos from god of war can be seen briefly after Dollfaces get off the elevator and just before the scientist gets chucked to the snake to eat.

It would probably be simpler to list what weren't references, but I just saw it today, so I'll give it a start as a community wiki:

That should be a good start.

About 1:17:00 when you're looking at the 3x3 grid of the chaos, the middle row, first column with the woman at the desk - it looks like the foot of the aliens from Independence Day. The man on fire looks like the original Thing from the 1950s and 1983. The surgeons with the scalpel are probably generic but remind me a little of Dr Giggles.Nosferatu at 1:17:15 (above the monitor of the guy with the sign) is a reference to one of the oldest movies (or horror movies) ever created. Green blood patient - Toxic Avenger? And Bigfoot throwing the guy into the lockers: Definitely Jack Links Beef Jerky.

"They're like something from a nightmare." "No, they're like something nightmares are from." Not all of these are references to specific movies or games. Listen to the commentary; they specifically avoided doing that. Most of them are archetypes. For example, The Huron is maybe the first real American imaginary monster, "the Indian who might kill you." While Fornicus is clearly a Cenobite (and I keep thinking I see the reflection of another one in his cube), listen to what Goddard and Whedon say during his scene.

There were several video game references, the scene where they're entering the tunnel and the camera chases a hawk. The hawk scene is taken from Shadow of the Colossus. Also I feel like the Unicorn is an Oblivion reference because in Oblivion you can mount a Unicorn but it's notorious for randomly attacking guards, and the Unicorn in the movie attacked a guard.

The Scarecrow Folk might have also a reference to the Baghead guy from The Strangers (image taken from Flickr). 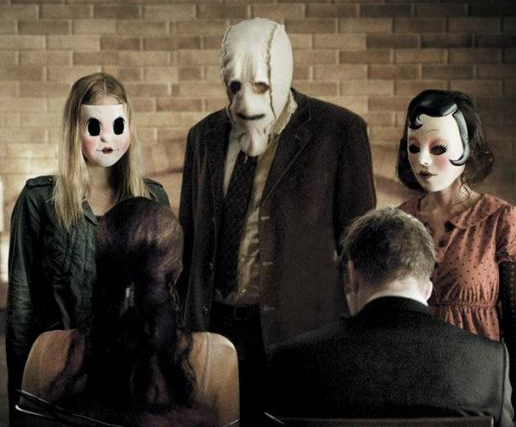 More likely, I'm pretty sure the Jeepers Creeper monster was a scarecrow.

Dismembered goblins could be from the movie Don't be Afraid of the Dark or even Stephen Kings Cat's Eye... In all three movies there are small goblin like creatures that live in the walls... and I know that in both the creatures got dismembered.

For the Scarecrow Folk I thought of the movie Husk that was on Syfy one night, but looking back it was made in 2011 so I doubt it. Thought of this because the Scarecrow was an angry spirit who would kill the people that entered the corn field and turn them into scarecrows...

Sexy witches could be The Craft or Witches of Eastwick

While Ballerina Dentata was a unique creation, the second I saw the music box, I thought of the dancing corpse from Evil Dead II.

Zombie vomiting to the face of captured man - 28 days later.
Fat Zombie can be seen in elevator episode among other cells (left and down from giant centipede), and it looks exactly like the boomer from Left 4 Dead.

user66548user66548
19
0
Add a comment  |
Highly active question. Earn 10 reputation (not counting the association bonus) in order to answer this question. The reputation requirement helps protect this question from spam and non-answer activity.

Not the answer you're looking for? Browse other questions tagged movie the-cabin-in-the-woods or ask your own question.

17
Recapturing the Zombies that have been Released?

35
Is there a particular movie being referenced in the opening scene of The Cabin in the Woods?
12
Movie Identification: 1980/1990's movie with flying creatures and a beautiful actress
12
What was the purpose of the two-way mirror in the Cabin?
13
Which buildings were used to create Hogwarts in the Harry Potter films?
11
Movie about stranded people on an island with dog-like monsters and Japanese WW2 bunkers
17
How did Saruman's army reach Helm's Deep so quickly?
9
What SF&F movies are referenced in this gif?
4
Movie/CGI in which a genetically engineered organism can turn electronic items into living things and also control them
21
Identify 2000-2010 movie: a group of people are isolated in a complex, and forced to kill one another to survive