Short stories book (80s?), one story about a detective falling in love with a woman in a rocket-lauching station; other story had lobster monsters

When I was about 12 years old, about 30 years ago, I used to read and re-read a science fiction short stories book. I think it was an American publication but I may be wrong about that.

The cover had multiple images on it. I believe there were some planets and stars and the picture of a woman (small) and maybe a spaceship of some kind (small). It was soft cover and it was quite thin, could not have been more than 100-150 pages, I think. Similar to an Enid Blyton sized-book and thinner. The colored drawing/pictures on the cover were muted and had a rustic-ness to it.

The first story in the book was about how a detective was going to meet a woman in a rocket-launching station and then it turns out she was beautiful and he fell for her. But she had to leave this planet and I think she did something to him before she left; either wiped his memory or took him with her. Obviously, there are some huge gaps in my memory...

I don't remember much about the other stories in the book, except that one of the other stories was about a planet where a bunch of people were caught outside trying to escape these giant creatures with giant pinchers/claws, like lobsters have. And the final line in that story was how they could here the click-clack of the claws coming closer and they knew they were doomed.

One of the stories might be 'A Walk in the Dark' by Arthur C. Clarke. You could look for anthologies containing it.

Remember that feeling of turning out the lights and walking up the stairs? Remember the moment when childhood bravado fails and the what if's begin - what if there are monsters in the dark, what if the darkness makes them bold, what if they were creeping up the stairs after you, ready to snap at your heels without notice? Clarke expands that terror into a six mile trek on a barren, lightless world. Robert Armstrong, alone and without any light-source, alternately ridicules and fears the mythical monster in the dark. Unfortunately, it is all too real...

Review by user Melissa on Goodreads

I have managed to track down the book.
It is "Beyond Infinity" by Robert Spencer Carr.

Turns out that the story by Arthur C Clarke was not even in it... My memories are all muddled the older I get...! 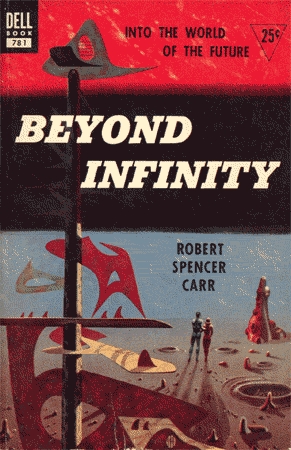 Appreciate all your help.

26
Collection of fantasy/horror short stories with one or two full color illustrations per story
4
Book with short stories, one about cars with weapons other about sports with war
9
Short story series about a woman with a sentient computer chip or suit
10
Short story anthology, one story was about a leathery alien thing that had a fight with a bear
6
Book of 4 short stories, one about an afterlife, title begins with 'L'
10
80's (or earlier) short stories book: tiny visitors in a house inside a house, horses appearing upon wishes, and a story about getting lighter
28
Young adult short story book with one story where a woman finds a walrus suit and becomes a walrus
9
A short book about a woman who helps defeat aliens that she had herself engineered in the future
12
Scholastic sci-fi anthology book containing a short story about a planet with crystal monsters